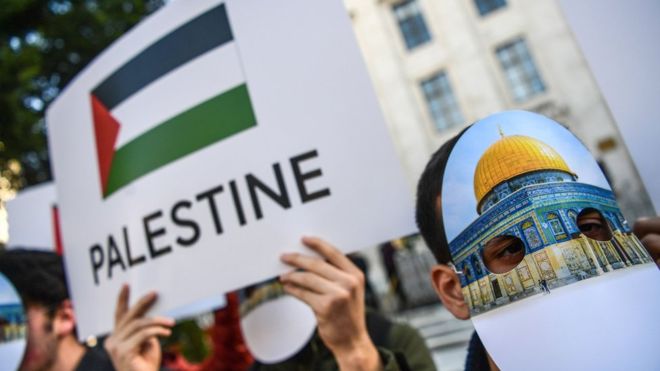 OIC: The decision to recognise Jerusalem as Israel’s capital as “null and void”

The Organisation of Islamic Cooperation communique declares US President Donald Trump’s decision to recognise Jerusalem as Israel’s capital as “null and void”.

The Muslim leaders had gathered in Istanbul, for an emergency summit of the Organization of Islamic Cooperation (OIC). They condemned the US decision to recognize Jerusalem as the capital of Israel. The controversial move was branded “an attack” on the rights of Palestinian people in the final declaration by the summit.

The declaration states that the US decision on Jerusalem is equivalent to its withdrawal from the Israeli-Palestinian peace process.

In a speech to the OIC summit in Istanbul, Mr Abbas said “it would be unacceptable for the US to be the mediator “since it is biased in favour of Israel and the UN should take over”.

The organization promised to take the discussion on Trump’s Jerusalem move to the UN General Assembly if the UN Security Council fails to take any action.

While speaking to the press after the summit, Palestinian President Mahmoud Abbas vowed to go to the UN Security Council to seek full UN membership for the country.

The communique issued by OIC member states says they reject the unilateral decision by the US to recognise Jerusalem as Israel’s capital and consider it an “attack” on the rights of the Palestinian people.

They accuse the US of “deliberately undermining” peace efforts and warn that it has given “impetus to extremism and terrorism”.

They say Washington will be held “fully liable for all the consequences of not retracting from this illegal decision” and that it has effectively announced its “withdrawal from its role as sponsor” of the Israeli-Palestinian peace process.

They then invite all countries to “recognise the State of Palestine and East Jerusalem as its occupied capital” and ask the UN to assume its responsibilities and reaffirm the city’s legal position.