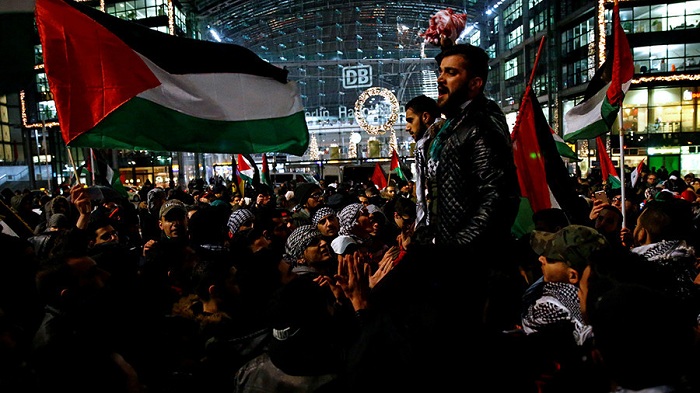 Around 200 demonstrators with Palestinian flags took to central Berlin on Tuesday to vent their outrage at Washington’s decision to recognize Jerusalem as the capital of Israel. A wave of anti-Israeli protests has swept the German capital since then.

Ahead of the protest, which took place in front of Berlin’s Central Station, police invoked a ban on burning any objects at the rally, meaning they would be able to intervene if anyone attempted to burn an Israeli flag, despite it not being an offence under German law. Flags have been burned at protests that have been gripping Berlin since Friday.

Activists on Washington Square in front of Berlin Central Station brandished Palestinian flags and a banner “Freedom for Palestine,” while shouting slogans such as “Down, down Israel.”

The anti-Israel and anti-US rallies, in particular the sight of Israeli flags being burned on German streets, prompted lawmakers across party lines to condemn protesters’ actions.

Interior Minister Thomas de Maizière (of the CDU) warned the protesters that insulting Israeli symbols would not be tolerated in Germany, which is, as he put it, “in a very special way connected to the state of Israel and all the people of the Jewish faith.”

That’s despite the German Criminal Code not listing the burning of flags, including the Israeli one, as an offense, unless the flag is used as a state emblem. It means that burning it is only punishable if it’s flown by the embassy or another government’s institution.

Now, the Central Council of Jews in Germany wants to change that. “Whoever burns Israeli flags questions Israel’s right to exist, denies it. This way one exceeds the limits of freedom of assembly,” Josef Schuster, President of the Council, told Rhein-Neckar-Zeitung, calling on the German government to “promptly examine possible changes to the law.”