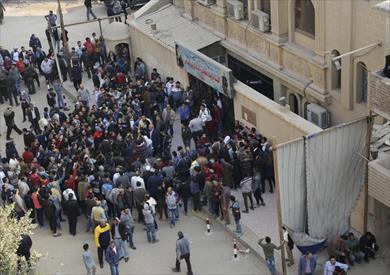 A wide international condemnation of the terrorist attack on Helwan church

Head of the Evangelical Church in Egypt Andrea Zaki condemned a terrorist attack that targeted a church in Helwan district in Cairo on Friday.

In a statement, Zaki said such terrorist attacks aim at destabilizing Egypt and spoiling Egyptians’ celebrations of the New Year and Christmas. He also called on the Egyptian people to unite and renounce all forms of terrorism.

Anba Damian said this attack will strengthen the unity of the Egyptian people, underlining the necessity of standing firm in the face of terrorism.

In a statement, Allam said that radical and terrorist groups used to kill people while “our soldiers are fighting terrorism and sacrificing their lives for the sake of the homeland”.  He offered deep condolences to the families of the martyrs.

Bahrain condemned the terrorist attack on Mar Mina Church in Helwan earlier in the day, in a statement, the Bahraini Ministry of Foreign Affairs reiterated Bahrain’s firm stance with Egypt in its war against all forms of terrorism, its supporters and its funders, as well as its full support for measures taken by Egypt to preserve its security and stability.

It offered condolences to the Egyptian leadership and people and the families of the victims, wishing the injured a speedy recovery.

From its side, the US embassy in Cairo condemned the terrorist attack on Mar Mina church, which left several people dead and injured.

The embassy said on its twitter account “the US stands steadfastly with the people of Egypt in the face of such cowardly attacks”.

“The US Embassy strongly condemns today’s terrorist attack on a church. We offer condolences to the families of the victims and wishes for speedy recovery for those wounded”, it added. (MENA)