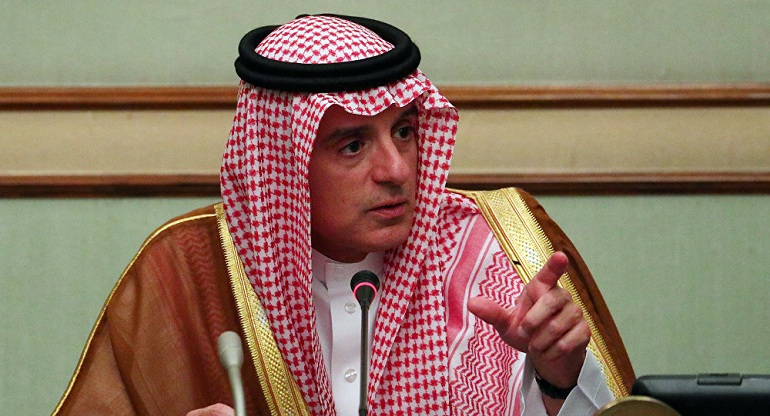 Saudi FM: No military action against Qatar from the Anti-terror quartet

Saudi Foreign Minister Adel Al-Jubeir commented on the statements made by his Qatari counterpart Mohammed bin Abdul Rahman Al-Thani regarding his country’s readiness for military confrontation with Anti-terror quartet.

“The Anti-terror quartet problem with Qatar is much smaller than resorting to a military action and it is not on the table at all,” Al-Jubeir said during an interview here on Egyptian television.

The Qatari foreign minister responded to a question about the possibility of the Saudi-led boycotting countries taking military action, telling reporters in Washington that although Qatar hopes this will not happen, his country is “well prepared” and can rely on its defense partners, Turkey, the United Kingdom and the United States, which have a base in Qatar, according to comments quoted by Bloomberg.

“Their behavior cannot be predicted, so all options should be on the table for us, but we have enough friends to stop them from taking these steps, and if there is any aggression, the US forces will be affected,” he said. That American support would be available.

Al-Jubeir denied that Saudi-led boycotting countries trapped Qatar, as Doha claims, because the blockade meant the presence of warplanes over Qatari airspace and warships, stressing that the measures taken were within the province only.

Saudi Arabia, the United Arab Emirates, Bahrain and Egypt took a decision to boycott Qatar on June 5 because of their support for terrorism, which Doha denies.