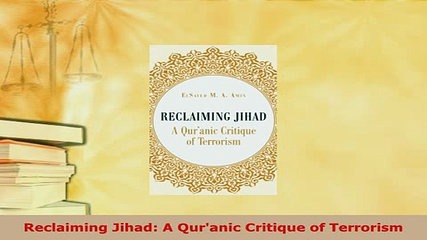 Among many other issues that the world is faced with is the issue of terrorism. But alas only Muslims are held accountable in one way or other for the phenomenon. Since the 11 September attacks of 2001, majority of the people in the West consider Islam and the Muslim World “as a source of threat to the international order and as the main source of terrorism and violence in the name of religion. It is also incorrectly alleged that Islam is innately supportive of terrorism. But the question raised here is that, is Islam really a terroristic religion which promotes terrorism? Or is it misinterpretation of Islam by some extremist Muslim and non-Muslim scholars? In order to answer all these questions everyone should have to act morally to know and comprehend the Qur’anic perspective on terrorism.

In “Reclaiming Jihad: A Qur’anic critique of Terrorism”, the author ElSayed Amin scrutinizes the issue of terrorism from both Qur’anic and Western perspectives. In order to recognise the truth about the concept of terrorism from both perspectives, Amin describes, it is mandatory to know the generally agreed definition of terrorism. While defining ‘terrorism’ the author found no clear-cut definition which is agreeable to all. As one person’s freedom fighter is another’s terrorist. Similarly the issue of “relativism” — the definition and acts of terrorism can vary from one society to another and from one culture to another, is a major obstacle in defining terrorism. Another serious impediment occurring in defining terrorism is a “lack of objectivity”, which without any hesitation leads to a tendency to apply openly the tag of  “terrorist” to enemies on their heads while turning a blind eye to equally terrorist acts carried out by friends or allies following agreeable goals.

As far as Qur’an is concerned regarding the issue of terrorism, the author, a senior lecturer of Islamic studies at al-Azhar University, Egypt, and member of the Supreme Council of Islamic Affairs in Cairo, enlightens us that the Qur’an exegesis (either classical or modern) clearly not refers the issue of terrorism in its modern sense, however it refers to many of its elements by discussing various forms of corruption (fasad) or a negative use of force that may be linked to modern terrorism. In his book the author shows explicitly how Qur’an takes a very vital approach in prohibiting and condemning all types of corruption committed against human beings and their property, religion, honour and intellect, as well as other forms, such as destroying the environment.

By using classical and modern Qur’anic exegetical traditions the author addresses nicely the key verses of the Quran that have been wrongly interpreted by some extremist Muslims and non-Muslims to establish fear and terror as a relational norm between Muslims and non-Muslims. While describing terrorism is not limited to a particular nation or religion, he in his book says that,

‘Terrorism inspired by religious goals is by no means confined to Muslims or the Muslim world for that matter. In recent decades, Sikh groups in the Punjab section of India; Jewish settlers who live on the West Bank (in territory Israel occupied during the 1967 war); and extremist Christians who hope to accelerate the coming of the Millennium… have all carried out terrorist attacks in order to further their goals.’ (pg. 27).

The author perfectly presents a thematic analysis of one of the most controversial verses of the Qur’an, viz 8:60, which is frequently misinterpreted by some Muslims and non-Muslims to justify terror against non-Muslims and to falsely portray Qur’an as a ‘fascist book’ preaching hatred and animosity in the World respectively. The Muslims and non-Muslims who see this verse as a call for terrorism or Sword, actually lacks understanding, as it calls Muslims to prepare sufficient forces for defensive purposes to deter their enemies whose hostility is known to them or is known to be on the verge of attacking them, the author claims.

In much of the contemporary discussions and writings, Jihad is frequently associated with terrorism or violence and in order to clear all this chaos and confusion related to the term Jihad, the author, ElSayed Amin, meticulously investigates and highlights the various stages of Jihad in the Quran and explores how far these stages are engaged by classical and modern interpreters of Qur’an to shape the what might be called international relations theory of the Muslim state in both the traditional and contemporary periods. While refuting any link between terrorism and jihad the author says that it is not actually Jihad which sometimes is being misunderstood as being equal to terrorism in modern times but in point of fact it is the exclusivist attitude of classical and some modern scholars towards non-Muslims which results enmity between them, as most of the modern terrorist groups, such as the late Bin Laden, selecting from these exegesis for their own terrorist agendas.

While attempted to bridge a profound gap between extremist and pacifist reading of the Qur’an, the author in his book beautifully highlighted the role of the most of the modern exegetes and scholars who present a lenient yet convincing view of what relations between Muslims and non-Muslims should be like. In contrast to the extremists or adherents of the classical theory of Jihad, they see this relationship (i.e. relationship between Muslims and people of other faith) has peace as its fundamental principle, except when Muslims are attacked, in which case, they are allowed to fight in self-defence.

By explaining the concept of terrorism, Amin, asserts that terrorism is a grievous crime against humanity and has no place in Islam. Although there is no Qur’anic textual evidence related to modern-day terrorism, but there is a Qur’anic verse (i.e. 5:33–34) which is related to crime and shares much in frequent with terrorism. Hence, he inferred, the punishments that the Quran constitutes for this crime should be applied to the incidents of terrorism as well. The Qur’anic verse which the author referred above reads as follows:

“Those who wage war against God and His Messenger and strive to spread corruption in the land should be punished by death, crucifixion, the amputation of an alternate hand and foot, or banishment from the land: a disgrace for them in this world, and then a terrible punishment in the Hereafter, unless they repent before you overpower them—in that case bear in mind that God is forgiving and merciful.” (5:33–34)

Besides punishment, this Qur’anic verse also opens the door for penitence for terrorists who honestly repent. Punishment for terrorists and the encouragement of sincere repentance should complement, Amin says, the path of persuasion—seeking to motivate and convince terrorists to shun violence and make them understand the hollowness of the religious justification they give for engaging in religious violence. The Muslim scholars who have a deep understanding of Islam and hold moderate views could be successful in convincing terrorists and eliminating menace of terrorism from world, Amin suggests.

Finally I conclude by saying that Amin’s work is outstanding, easy to read and understand. It is essential for anyone interested in understanding the true meaning of Jihad and justice fixed in Islam’s conception of violence. But in my opinion the book undermines its  significance by not describing the Prophetic traditions regarding the issue, as in my opinion Prophetic traditions are key for better understanding of any Qur’anic issue.