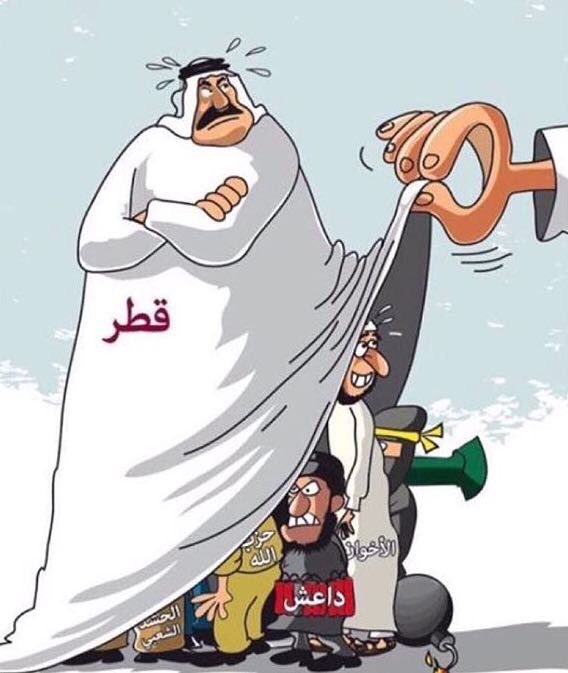 Why Qatar will not abandon Brotherhood?

The rise and fall of ‘Super Qatar’

What goes up must come down and often what goes up fast eventually comes in for a crash-landing. That in short is the story of the rise and fall of Super Qatar.

With the second largest natural gas resources in the region and at the peak of its global influence, Qatar clinched rights to host the World Cup 2022 football tournament, the world’s most prestigious sport event in December 2010.

Fast forward to October 2017, the regionally boycotted Qatar lost its bid for the position of the director general of the Unesco. Suddenly the Super Qatar does not look as formidable as it was ten years ago.

For a while commentators from all over the world were fixated on the meteoric rise of Qatar as an influential force in Middle East politics. And also a successful mediator in the region having cultivated a careful image of a peaceful and neutral power. Although the story of its rise is replete with paradoxes, Qatar was nevertheless impressive, formidable, and unstoppable.

The sharp rise of the super-rich Qatar is intimately linked to its abundant natural gas resources. According to the latest estimate, its reserves of natural gas was estimated at around 900 trillion cubic feet, that is nearly 15 per cent of all the known natural gas reserves in the world and the third largest behind Russia and Iran.

Its financial assets are just as massive. Qatar’s 2016 sovereign wealth fund is the 11th largest fund in the world having posted an all-time high of $338 billion (Dh1.24 trillion). The tiny Qatar with a population of approximately 250,000 citizens had the world’s highest per capita gross domestic product of $111,963.

By 2014 Qatar has emerged as the third biggest economy with a gross national product of $189 billion. At one point in time it was the fastest growing economies in the world, registering 16 per cent growth in 2010.

It is this incredibly deep pocket that fuelled the regional influence of Qatar for over 15 years. Qatar is still impressively rich, but not super-rich. It is now faced with a sharp drop in the price of the natural gas that currently hovers around $2.50 down from $8 few years ago.

The ratings agency Moody estimated that the gas-rich nation burned $38.5 billion of its vast financial reserves during this summer. It is now considering raising at least $9 billion from the international markets to meet state expenses.

But financial clout alone doesn’t explain the swift rise and now the fall of the once formidable Qatar. The former politically ambitious emir of Qatar Shaikh Hamad Bin Khalifa Al Thani takes most of the credit for making his country, and more so himself, the ultimate arbiter on many regional issues.

During his 18-year reign, he transformed Qatar beyond recognition. With his political acumen, Shaikh Hamad enabled the tiny Qatar to wield more influence on Arab politics than other Arab countries.

That is the principal legacy of Shaikh Hamad as he dramatically handed over power to his 33-year-old son Shaikh Tamim Bin Hamad Al Thani.

Qatar was never to be the same after the sudden departure of such a towering political figure as Shaikh Hamad in June 2013. That is when the gradual fall of Qatar was set in motion and it has not stopped. Although many believe that he still wields power behind the scene, Qatar has been gradually receding to the background of regional politics.

Since June 5 this year, Qatar pulled back from Gaza. It is now nowhere to be seen in Syrian affairs. Qatar is becoming an irrelevant player in the Libya conflict. It was told by Riyadh to pack up and leave the Yemen theatre. These events among others confirm that Qatar is in retreat after Shaikh Hamad’s departure.

In 2011 Qatar along with five other Arab states, namely Egypt, Saudi Arabia, Algeria, Morocco and the UAE made it to the exclusive list of the middle powers of the world. This middle power is a sovereign state that is not a superpower nor a great power, but still has large or moderate influence and international recognition.

The financially and politically shrinking Qatar that is rejected by four Arab states, Saudi Arabia, the UAE, Bahrain and Egypt representing over 40 per cent of the total Arab population is back again to the small state status where it was before 2011.

What remains of Qatar’s middle power attributes is the Middle East’s first 24-hour satellite TV news Al Jazeera established in 1995. With its strenuously anti-status quo rhetoric, the highly controversial Al Jazeera has been a prime factor behind Qatar’s rise as a regional influencer. Al Jazeera is still a media force to reckon with, but its golden days are long over.

Just like Qatar itself, Al Jazeera reached its maximum political impact during the Arab Spring of 2011. Once considered the most influential TV news channel in the Arab World, Al Jazeera now lost its glamour as well as its credibility.

A recent survey conducted by Doha based Northwestern University (NU-Q) suggests that the popularity of Al Jazeera’s Arabic channel is fading in the region especially in the Arab Spring countries.

The survey, “Media Use in the Middle East,” showed that the viewer base of the network is just four per cent in neighbouring Bahrain, nine per cent in Tunisia and 20 per cent in Egypt.

Clearly the Qatar project which was a basket of paradoxes is crumbling. The fall of Qatar which has been in evidence for the past 5 years is both structural and permanent.

The recent boycott and isolation of Qatar by its immediate neighbours, its defeat at the Unesco last week and the growing doubts surrounding the World Cup 2022 tournament show that Qatar is like the Humpty Dumpty that sat on a wall and then had a great fall.

The maverick Qatar is not finished, but very little remains of the once rising Super Qatar.