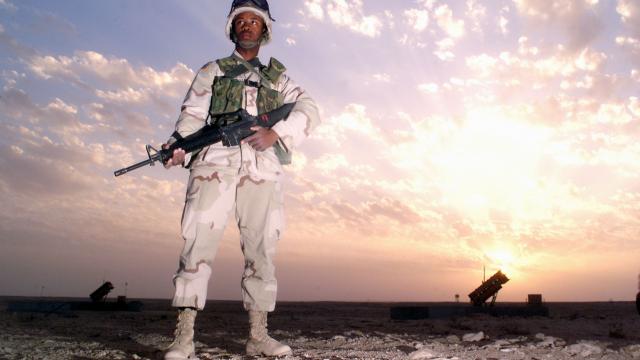 The case for moving Al-Udeid airbase from Qatar

The case for moving Al-Udeid airbase from Qatar

Would you put an American airbase, complete with its equipment and personnel, in a hostile country aligned with Iran? That is what Washington is doing today with America’s Al-Udeid airbase in Qatar. Earlier this year, former Secretary of Defense Robert Gates infamously stated that America’s Al-Udeid base should be moved from Qatar. Others chimed in too with observations and commentary.

According to U.S. President Donald Trump, who has publicly backed the Saudi-led effort and criticized Qatar, relocating from Al-Udeid would be no significant obstacle. Trump was asked about the effect of the crisis on Al-Udeid during an interview with the Christian Broadcasting Network that aired on July 12, 2017. “If we ever have to leave (Al-Udeid),” the American president said, “we would have 10 countries willing to build us another one, believe me, and they will pay for it.” The countries that the president is referring to also believe that Iran must be stopped once and for all.

As the prospect of a real military confrontation with Iran becomes more likely in the wake of U.S. Ambassador Nikki Haley’s speech at American Enterprise Institute. The likely next U.S. Secretary of State argued that Iran is not committed to the faulty Joint Comprehensive Plan of Action (JCPOA).

If Washington and Tehran clash and war erupts, Qatar’s potential role in such a scenario raises questions about the safety and security of Al-Udeid air operations and personnel. Iran’s ability to infiltrate American interests is a real possibility that includes possible scenarios of Tehran’s agents disrupting and degrading

Al-Udeid’s functions, such as cutting off gasoline and crucial military supplies. That is a serious possibility that should make war planners consider moving arrangements immediately. Qatar has chosen its own path with Iran through energy, economics and security. Al-Udeid needs to be moved as quickly as possible to another host country.

Qatar is also home to the forward operating base of U.S. Central Command. However, “CENTCOM” isn’t the only U.S. asset at Qatar’s sprawling Al-Udeid Airbase, with its two active runways capable of accommodating U.S. aircraft of any size.

Other branches of the U.S. military have been active in Qatar, including the U.S. Navy SEALS. The facility is also used by the British Royal Airforce. Camp As Sayliyah is a second military facility used for prepositioning logistical supplies, containing equipment for an entire U.S. army armored brigade. The base, which was built by French contractors over a decade ago, is one of the few U.S. airbases overseas where B-52 bombers, America’s largest warplane, can land due to the long runways. Those facilities could be relocated at varying speeds.

While Al-Udeid is the headquarters for U.S. military and air operations in Iraq, Syria and Afghanistan, it is now time to break the reliance on Qatar as an American hub, because Doha’s ties to Iran are becoming increasingly apparent: Doha is complicit in Tehran’s expansion across Arab lands in the Levant in those very battles themselves. Qatar’s intransigence is out in the open for all to see, as the Anti-Terror Quartet (ATQ) has been arguing through documentation.

As the crisis becomes more clear of Iranian-Qatari ties, American voices are questioning the rationale for Al-Udeid in Qatar. A senior ranking member of U.S. Congress, Ileana Ros-Lehtinen, chair of the subcommittee on the Middle East and North Africa, is raising fresh questions about the suitability of Qatar to host the Al-Udeid airbase, due to Doha’s failure to act against terrorist financiers.

Qatar’s role in actively channeling funds or failing to stop others from sending money to banned groups should bring into question the continued major U.S. military presence in the country. Representative Ros-Lehtinen argued that “We cannot allow for our air base to be used as a means to justify this sort of behavior… Doha’s behavior must change the status quo, and if it does not, it risks losing our cooperation on the air base.”

Importantly, Ros-Lehtinen defined Qatar as only helping “to facilitate our operations at our airbase”, while “the UAE, for example, has spent 12 years with us fighting alongside in Afghanistan”. The Republican congresswoman described Doha as allowing a permissive environment for terrorist financing and said that it had “openly housed Hamas leaders, Taliban leaders, and has several individuals who have been sanctioned by the U.S. Treasury Department and it has failed to prosecute them.”

Let’s note that Qatari potentate Hamad bin Jassim said that Qatar won’t allow for any attack from Qatar against Iran, thus rendering the base useless in case Iran is to be confronted. This point of view is engrained in the Qatari leadership. Qatar is not an ally of its neighbors nor of the United States, especially when it comes to Iran.

Qatar has always been an outlier in the Gulf Cooperation Council and haslong been regarded with suspicion as an Iranian agent by its neighbors. Al-Udeid is a central component to America’s air war capability, and is now sitting on Iranian territory, or at least that is how Tehran and Doha see the American base, licking their chops.