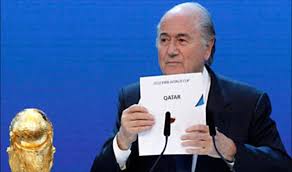 Qataris accuse neighbors of being jealous: How they responded?

Qatar, which has been under diplomatic isolation since June, derided a comment by senior UAE official that said Qatar’s hosting of the 2022 World Cup should depend on “rejecting extremism and terrorism”.

A statement from the Director of the Qatari Government Communication Office, Sheikh Saif Bin Ahmed Al-Thani described the demand as “pure jealousy”.

“The tournament is not up for discussion or negotiation… this demand is a clear attempt to undermine our independence” the statement added.

Four Arab nations, namely Egypt, Saudi Arabia, the United Arab Emirates and Bahrain, have been boycotting the tiny emirate of Qatar since May, accusing it of sponsoring hard-line Islamist groups and supporting terrorism.

Efforts to mediate the crisis by Kuwait and the United States went in vain as Doha kept on altering facts and falsely denying the charges against it.

Oddly enough, the existence of numerous international documents and leaks that prove Doha’s connection with renowned terror organizations and events, however, did not stop the statement from saying, “There has never been a legitimate reason for the blockade of the State of Qatar.”

The demand of Qatar waiving to host the controversial 2022 World Cup grew in the wake of criticism of Qatar’s human rights record, not to mention how Qatar won the right to host the tournament in the first place.

Observers and social media users, on the other hand, see that using the word “jealousy” by the Qatari government is rather ridiculous, as even if Doha has its own plan to project the emirate onto the global stage via sport, Egypt – for example – has the top-ranked soccer team in Africa, while Saudi Arabia and the UAE are both listed in Asia’s top eight.

Amnesty International stated that despite shedding the light the major human rights abuses among workers building the infrastructure for Qatar’s 2022 FIFA World Cup, Doha did little to improve the situation.

The London-based non-governmental human rights organization was concerned in its report with the hard conditions suffered by laborers who worked on the stadium under the Kafala system; it said “systematic human rights abuses were still prevalent among laborers”.

In 2016, the organization produced a video report that highlighted the systematic abuses, in some cases forced labor, suffered by migrant workers building the international stadium.

The report was titled “The ugly side of the beautiful game: Labour exploitation on a Qatar 2022 World Cup venue”.

A year earlier, Journeyman Pictures also produced their own report “Slaves to the Beautiful Game: Following the corruption scandal and in light of the horrific conditions of its preparation, is it time to strip Qatar of the football world cup?”; it focused on migrant workers who have died building stadiums for the 2022 World Cup.

Another report was produced under the title “The Hidden Brutality of Qatar’s FIFA World Cup Preparations”, all as attempts to reveal the real truth behind hosting the tournament.

The report added, “In Qatar, 4000 workers will die to put on the 2022 Football World Cup. This staggering figure indicates the slave-like conditions workers of football’s most expensive construction are enduring.”

According to the Telegraph, a row broke out on Friday over whether Qatar’s staging of the 2022 World Cup was under threat after a report warning of “an increasing political risk” to the tournament was leaked.

The study, reported the Telegraph, carried out by management consultants Cornerstone Global, was passed to the BBC amid the ongoing diplomatic crisis which has engulfed the tiny, gas-rich emirate and its neighbors. The report warns construction companies working on Qatar’s £153 billion infrastructure program that it is a “high-risk project”.