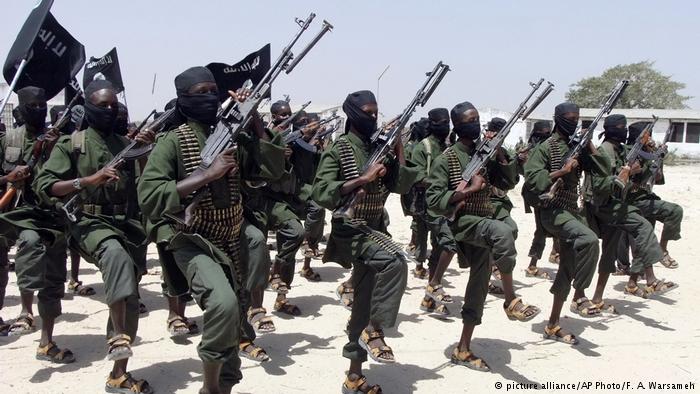 Abu and Gardere are not their real names — they wish to remain anonymous. The two men are deeply disillusioned. They expected more out of their time with the al-Shabab militia, which is linked to Islamic extremist group al Qaeda. They are both from the Lower Shebelle region in southern Somalia, which is now known as a stronghold for al-Shabab. “We want an Islamic state,” says Gardere. “Al-Shabab is fighting democracy to enforce God’s word, so I joined the movement.”

Fighting against the unbelievers

Gardere is in his mid-fifties and has two wives and eight children. He wears a yellow prayer cap, or taqiyah, and dark sunglasses. In the middle of his forehead is a dark gray zebibah, also known as a prayer bump — the result of repeated contact with the prayer mat. It is often seen on particularly devout Muslims and considered a sign of religious piety. The former teacher says he joined al-Shabab in 2008 while Ethiopian troops led the anti-terror struggle in Somalia. There are now approximately 22,000 African Union troops stationed in the country.

The background of the two men cannot be verified independently, but they have travelled to meet and share their stories with DW. They say it is important for them to talk about their experiences and beliefs. Gardere quickly gets to the point: “There are different forms of government such as democracy or dictatorship imposed by the military. But these are all created by people. Only the Islamic state is based on the word of God. God is the only true principle and it is the duty of all Muslims to follow God’s word.”

Giving in to doubt

But does God command violent attacks? Does God send suicide bombers to Somali cities to kill civilians? Gardere looks down at the floor and hesitates before responding: “The violence is the main reason why we left the movement. We wanted to fight against the unbelievers, against the invaders of Somalia, for an Islamic state. But that is not the issue anymore. Today the movement kills civilians.”

Gardere says he left al-Shabab in 2016 — after eight long years. During this time the extremist group committed many terrorist attacks in Somalia, as well as in the neighboring states of Kenya and Uganda, who have sent their troops to fight against al-Shabab on behalf of the African Union.

Why did Gardere wait so long before he made his decision?

“There were regular seminars, where they explained their ideas and convinced us over and over again that change is possible through the word of God,” he explains, “We firmly believed in a better future and we were patient. But it did not get any better.”

Abu also believes in the concept of an Islamic state. He says he joined al-Shabab in 2011, just as a severe drought was beginning to grip East Africa. In Somalia alone, more than 250,000 people died, many due to cholera because of poor living conditions. Abu was a teacher, like Gardere. “At the time, my salary was not enough to feed my family,” he says, “I joined mainly for economic reasons because I wanted to make more money.” But there was another reason Abu ultimately decided to joined the extremist group: “Most of the youths in my village had already joined al-Shabab. They became pushy and acted like leaders who were permitted to giver orders to even their elders. I wanted to do something about that.”

According to Gardere and Abu, they briefly worked as gunmen for al-Shabab. However, they would not reveal whether or not they actually killed anybody. Later, they were employed under the Islamic militia’s tax administration. “Al-Shabab collects taxes from the population. They tax you for your house, for your land and for your children. If you want to send your child to school, it costs around 5 dollars a month,” says Abu. But he soon realized that the system was not working like he thought it would: “I personally did not get anything out of it. I had hoped that my family would be doing better under al-Shabab, but this was not the case.” Abu and Gardere worked as teachers in Somalia before joining Islamic extremist group al-Shabab. But what made them decide to leave?

Abu is 45 years old and a father of four children. He also let years go by before he finally decided to leave in 2015. He says he waited so long simply because there was “no alternative.” In the areas controlled by al-Shabab, life was “more peaceful and secure, especially for women.” Anyone caught using drugs or alcohol was severely punished. And he did not trust the Somali government. “People believe the government is bad, because they are. People believe that the government’s soldiers plunder, rape and kill. Al-Shabab never kills within its own territory”, says Abu. However, Somalia is repeatedly listed as one of the top 10 countries most affected by terror attacks. According to the Global Terrorism Index (GTI), almost 4,000 people were killed by violent extremist activities between 2006 and 2015.

There are inconsistent points in Abu and Gardere’s stories. Their perception of their world is selective and they reinterpret the concept of terrorism. Both are disenchanted Islamists who still want a state based on Sharia law. But they also say they want to give the new Somali government a chance, and neither of them speaks badly about the United States’ increased military engagement in Somalia.

“Al-Shabab is divided,” says Abu. Many leaders within the group are opportunists who, like the government, are mostly concerned with money and power. “These leaders are collecting money in the regions in which they are fighting, but the money does not stay there — they send it back to their own clan in their home region. Al-Shabab is just as caught up in clan politics as the government is,” explains Abu. In February, Mohamed Abdullahi Mohamed assumed office as the President of Somalia. He says his government intends to transform Somalia into a democratic, federal state, making terrorism and clan-related violence a thing of the past. Somalia is currently receiving significant support from abroad — both militarily and financially.

Somalia has not had a stable national government for almost three decades. It will take time to build a functioning state like the one President Mohamed envisions. Al-Shabab is under increasing military and political pressure, but they still have the capacity to commit devastating terror attacks, even in the capital, Mogadishu.

Meanwhile, Abu and Gadere continue to live apart from their families for security reasons. They hope that one day they can return to work as teachers. They also hope for a reward because they voluntarily decided to leave the extremists.