Latest Posts
21:43
Home Reports Your guide to the male-only stick dance in Egypt 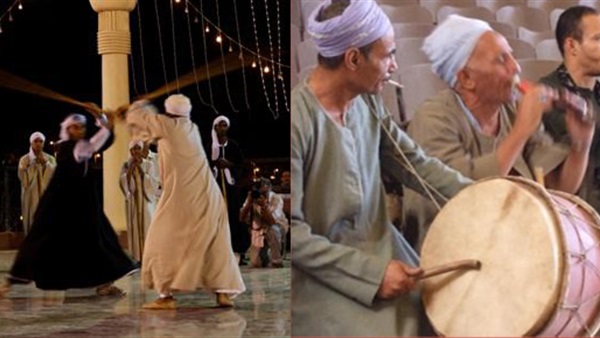 Your guide to the male-only stick dance in Egypt

Your guide to the male-only stick dance in Egypt

on: September 14, 2017
Cairo – Tahtieb, ‘stick dance‘ or ‘cane dance’ is a traditional form of Egyptian folklore and martial art known in Southern Egypt for centuries.  The word Tahtib comes from the Arabic word hatab which means ‘dry tree branches’. At the onset, it was described as a form of martial art up till it eventually morphed into its modern-day dance form as a performance to exhibit talent, gracefulness and courage.

Two tahtib players wielding sticks at the National Tahtib Festival held in Luxor, Egypt, Dec. 14, 2013. (photo by International Center for Teaching Tahtib)
Upper Egyptians stood out from all the others in this form of stick dance due to their physical strength, the availability of open spaces over there and their preservation of the dance for centuries by refining it from decade to another. The game particularly is considered a symbol of love, cooperation and acceptance of others. It has been called several names throughout history, most prominently, ‘the stick of love’, ‘the men’s passion’ and ‘the duel of wit’, just to mention a few.

Sabry El-Swhagy, the founder of International Centre for Teaching Stick Dance, says that the dance game typically uses some actions by the arms and speedy movements by the feet iinspired by the traditional Tahtib. He added that the dueling pair enters a battlefield wearing the typical costume, a rose-coloured Jalabiyya, that is, a men’s traditional robe-like garment with a white turban wrapped in upper-Egyptian style.

As far as the music is concerned, the traditional music for Tahtib features the folkloric bass drum, tabla baladi , played on the popular mizmar (i.e. reed instrument similar to an oboe).  Each of the men carries a big stick or staff to perform mock battles (sometimes as soloists against imaginary opponents, duet or ensemble.). The regular stick used for Tahtib dance is usually called Asa or Asaya, Shouma or Nabboot which is about 4 feet long, but when playing from horseback the stick is closer to 12 feet long.

The dance game is widespread in the region of Upper Egypt, such as Assiut, Sohag, Qena, Aswan and Luxor Provinces. The dance is introduced mainly as an essential part of the nuptial ceremonies, fairs, happy events and any popular gatherings at large.  It is generally performed in the squares and open spaces in front of the houses of families.
The game is typically overseen and arbitrated by three veteran dancers who act as referees. Two stand at each edge of the battlefield whereas the third one stands in the middle to closely administer the arbitration.  Ali Abdaty, Stick-dance coach, pointed out that stick-dance is the best martial art one can watch and enjoy because it depends on the body speed and the ability to summon mental powers, agility and courage as well as to make hit-and-run attacks in addition to the technique of dodging the opponent’s hits. He added that it is such a challenge that improves the face-to-face confrontation skills with rivals.

Similarly, Hajj Ahmed Atef, a Tahtib coach, said that the game is not limited to a particular social group, but it is open for everyone, old and young with the exception of women who always watch and barrack for the games from the balconies of their houses.  By the same token, the game dance is not exclusive for a specific age group as there are performers who might be 75 years or more.

Mr. Sabri said that there are no places or schools concerned with teaching the dance game, but they are found scattered somewhere.  The dance game has a wide-raging audience who stay tuned to the performances wherever they take place in order to watch and enjoy.
Tahtib game is typically geared towards developing self-defense techniques for its player.  In Tahtib competitions, two men will battle each other with their sticks, each seeking to strike the opponent with his stick while at the same time parrying blows from the other.

In the same context, Tahtib is regarded by sociologists as a form of social activity that enables men to vent any suppressed inhibition or to release any extra energy in a peaceful manner, with no harm done to anyone. It is also the only ‘friendly’ fight in Upper Egypt that if one of the men in the duel died no blood-money or retaliation is to be enforced on the other fighter, in compliance with local traditions and norms that spell out that violence or the intention to kill were not there.  Moreover, in Upper Egypt, stick fighting has also been used to settle disputes and feuds between members of rival families, mostly in countryside areas that are tucked away from urbanism.

Despite the ancient nature of Tahtib and its importance as a hallmark of Upper Egypt, unfortunately, it has not yet been considered an official sporting event in Egypt, which is just unbelievable. There are contests being conducted all year round in Upper Egypt region which is considered the final abode of this longstanding tradition.  However it is not enough! We need to take action to preserve and support the residue of this tradition before it is long gone as many others did before.