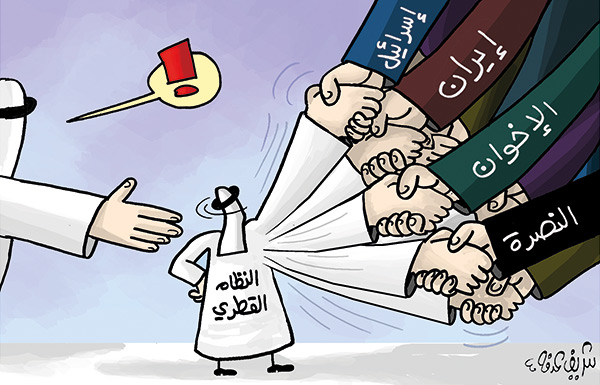 New York- Saudi Arabia clearly demanded Qatar to commit to the principles of the international law in fighting terrorism, calling on Doha to abide by commitments laid out in the Riyadh agreements of 2013 and 2014.

Saudi Foreign Minister Adel al-Jubeir on Saturday told the United Nations General Assembly at its 72 sessions that Doha’s practices of financial support to terror while disseminating hate speech is unacceptable, and so is providing safe havens to those who violated the law and should be brought to justice.

“Riyadh will continue to counter terrorism in all forms and manifestations,” Jubeir added.

The position taken by the four States was meant to demand that Qatar follow the principles of international law in fighting terrorism, he explained.

The 15-minute speech coincided with Saudi Arabia’s National Day, something Jubeir has referenced in his opening remarks.

“At a time when my country is celebrating its national holiday, I address you as a messenger of a state that has placed its people as its first priority and created partnerships around the world”, he said.

He said that all the instability and continuous crises witnessed by the Middle East are the result of Iran’s aggressive acts, noting that Iran sponsors terrorism and has founded armed terrorist militias, assassinated diplomats and attacked diplomatic missions; not to mention stirring up sectarian strife, interfering in the affairs of the regional countries and occupying the three UAE islands.

The Saudi minister stressed that this aggressive behavior constitutes a flagrant violation of all the international conventions and of the Security Council resolutions, which made Iran subject to international sanctions.

He called on Iran to abide by international laws and principles of good neighborliness and non-interference in the affairs of states if it is to be a constructive member of the international community.

Pledging to continue providing aid to members of the Rohingya minority fleeing Myanmar, Saudi Arabia urged the Government of Myanmar to protect its population from discrimination.

“My country is gravely concerned and condemns the policy of repression and forced displacement carried out by the government of Myanmar against the Rohingya minority,” he said.

He said the “human tragedy” runs counter to all human rights, humanitarian values and international laws, and urged the Government to bring about an end in line with the UN principles.

The Foreign Minister said that Saudi Arabia will disperse $15 million in assistance to host some 500,000 people, while also personally intervening with neighboring countries and Bangladesh to ensure safe passage and house families in decent living conditions.