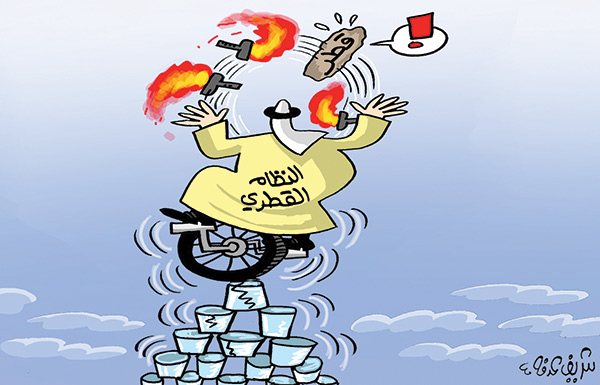 Qatar will soon discover the steep price of sponsoring terrorism.

Qatar to discover the steep price of sponsoring terrorism soon

Abu Dhabi – For more than three months, Saudi Arabia, the UAE, Egypt and Bahrain have made attempts to resolve the regional crisis triggered by Doha. These are nations whose security and stability have repeatedly been imperiled by Qatar’s actions. Yet the quartet has been remarkably patient in dealing with the problem.

Their forbearance has been returned with contempt by Qatar, which has continued remorselessly to finance terrorism, host extremists and deploy its broadcasting arm to undermine its neighbours. It has even deepened its relationship with Iran, the fount of violent extremism in the Middle East and beyond. At the same time, a PR campaign funded by Doha has sought to portray Qatar to the world as a victim of unprovoked aggression.

This effort backfired. The world learned in July that the quartet’s demands for the cessation of Qatar’s support for terrorism are not new. Qatar signed a formal agreement in 2013 pledging to relinquish support for terror groups and promising not to interfere in the internal affairs of GCC states. The following year, it reaffirmed the commitment by signing another formal agreement. It then violated the agreements by continuing to back groups such as the Al Qaeda-affiliated Jabhat Al Nusra in Syria and by throwing its clandestine support behind opposition groups in Bahrain. It is a measure of the quartet’s restraint that it keep these documents a secret rather than rushing to use them at the first opportunity to embarrass Qatar.

Clearly, Doha has misinterpreted the quartet’s stoicism. This is a grave mistake, as Sheikh Khalid bin Ahmed Al Khalifa, Bahrain’s foreign minister, made clear last week. In an exclusive interview with The National’s editor-in-chief on the sidelines of the United Nations General Assembly in New York, Sheikh Khalid explained that the current crisis is only the newest phase of a problem that is at least two decades old. “For 20 years, we have been very patient with a lot of things they were doing and continue to do and then we tried to reach agreements with them”, he said, referring to the Qatari government. But their goodwill has been met with intransigence. Sheikh Khalid detailed the ways in which Qatar has engineered instability and promoted terror.

The humanitarian catastrophes resulting from Doha’s support for terrorism affect the whole world, not just the region. Sheikh Khalid disclosed that a legal file is being prepared to hold Qatar to account. Terrorism, as Adel Al Jubeir, Saudi Arabia’s foreign minister, told the UNGA last week, is “the biggest challenge facing the world”. Riyadh and the quartet, he assured the UNGA, “will continue to counter terrorism in all forms and manifestations” to  uphold the peace and security of the region and, by extension, the world. Qatar will soon discover the steep price of sponsoring terrorism.