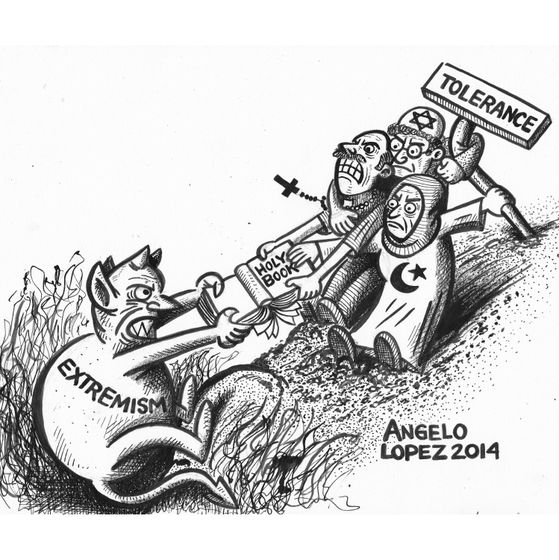 How extremist groups use religion to radicalize

How extremist groups use religion to radicalize

Daryl Johnson, the owner of DT Analytics, tackle in this report how extremist groups use religion as a pretext to radicalize themselves, although that the correct understanding of religions lead to tolerance.

“The War on Terror,” a phrase now part of the American lexicon, has been portrayed by U.S. policy makers and military commanders as a battle against radical Islam. As a result, many academics, government officials and counter-terrorism experts have researched, analyzed and assessed the role of Muslim extremists using the Islamic religion (rather, the misinterpretation of Islam) to radicalize and mobilize terrorists to wage “Jihad” against the West.

Few, however, acknowledge or understand how American right-wing extremists have also used religious concepts and scripture to recruit, radicalize and mobilize their adherents toward hate and violence against similar enemies. Much like al-Qaeda and the Islamic State, right-wing terrorists — who often refer to themselves as “Soldiers of Odin,” “Phineas Priests,” or “Army of God” — are inspired by their interpretations of religious concepts and scripture to lash out and kill in God’s name.

Religious extremism and its relation to violent conflict is not a new phenomenon. Many isolated confrontations, wars and conquests have been instigated or carried out in the name of religion. Throughout history, violent clashes between nations, religions and civilizations have resulted from differences in religious beliefs, scriptural interpretation and spiritual practices. Various religious factions, some more radical, have emerged from these armed conflicts. Other more dominant religions have also spread their influence through force and aggression.

During the 1980s and 1990s, right-wing extremists were galvanized by several national issues such as the perceived erosion of parental rights and authority through court rulings, expanding multiculturalism, abortion rights and the decline of the American family farm – all perceived as an attack on their Judeo-Christian beliefs which right-wing extremists view as a key component to America’s founding). These issues were magnified because of the far-right’s perception of a changing political climate which favored expanding benefits and equal opportunities to ethnic minorities, immigrants and other diversity groups.

So it was no surprise that religious concepts and scriptural interpretation played a role in the armed confrontations between right-wing extremists and the U.S. government during this time period — specifically, at the Covenant, Sword, Arm of the Lord (CSA) compound in 1985, Ruby Ridge in 1992, and Waco in 1993. These standoffs not only showed extremists rebelling against the U.S. government and its laws, but also asserted what they believed were their divine religious and Constitutional rights. These events served as radicalization and recruitment nodes to boost the ranks of white supremacists, militia extremists sovereign citizens, and other radical anti-government adherents who viewed the government’s response to these standoffs as tyrannical and overreaching.

In the cases of the CSA, Ruby Ridge, and Waco, religious concepts — such as end times prophecy, millennialism and the belief that the Second Coming of Jesus Christ was imminent — played a vital role in the recruitment, radicalization and mobilization of these Christian-inspired extremists and their illegal activities. For example, CSA members, the Weaver family and the Branch Davidians each embraced a lethal triad of end times prophecy, antigovernment conspiracy theories and an affinity for weapons. Author Paul T. Coughlin expounds upon this lethal triad in his book Secrets, Plots & Hidden Agendas.

This deadly combination has been linked to many extremists violating the law, instigating violent confrontations with law enforcement as well as providing motivation for domestic terrorist attacks (e.g. Spokane Bank Robbers, Eric Rudolph, Robert Dear, among others). Each also used their religious beliefs to justify engaging in “prepper” type activities, such as living off the land, isolating themselves from other family members and society, and stockpiling food, water and weapons to prepare for the end times and await — or even hasten — the apocalypse.

In Tabernacle of Hate, former CSA leader Kerry Noble lists three factors that contributed to the radicalization and mobilization of his group – (1) an ideology that generates fear, anger, despair, hate, etc.; (2) a group that emphasizes communal living, physical and mental isolation, filtered or limited access to information, and having a perceived enemy or limited options; and, (3) a charismatic leader that manipulates and directs others — often perceived as divine or God’s spokesperson. CSA was an insular community where church meetings, communal prayer, and group scripture study strengthened the extremist organization’s identity, ideology and membership. Noble’s three danger factors are applicable to some right-wing extremist groups today that also congregate in insular communities such as Warren Jeff’s Fundamentalist Church of Jesus Christ of Latter-day Saints (FLDS), Robert Millar’s Elohim City, and Dan Gayman’s Church of Israel.

Obviously, there is a wide range of world religions, denominations and congregations within these denominations (including various factions and sub-factions). Such diversity clearly illustrates the significantly complex and controversial nature of religion. Like any social culture, religious beliefs and written scripture are subject to human interpretation, cultural influences and historical context. Such diversity and autonomy not only strengthens religious communities, it also permits extremists to exploit it (e.g. their beliefs and sacred texts) to justify threatening others, criminal acts and violence against non-believers.

For example, in 1996, the Spokane Bank Robbers left business cards with a Celtic Cross and references to Yahweh (Hebrew for “God”), Obadiah 18 (e.g. Old Testament scripture in the Bible), and “His Wrath” at the scene of bank robberies and bombings. They believed they were literally carrying out God’s work by attacking banks, an abortion clinic and the local newspaper office. They viewed each of these targets as representing evil, Satanic influences.

Similarly, domestic terrorist bomber Eric Rudolph cited Biblical passages and offered religious motives for his attacks on abortion clinics in Georgia and Alabama. Extremist “true believers,” like the Spokane Bank Robbers and Rudolph, will eventually cloak themselves in a mantle of religious righteousness and may initiate their violent act as part of a divine plan, heavenly edict or perceived mission from God.

An important aspect to understanding right-wing extremists’ use of religious concepts and scripture is the emergence of Dominion Theology among Christians in the U.S. Due to its strong and divisive message, Dominion Theology likely serves as a gateway to right-wing extremism. According to Frederick Clarkson, a Senior Fellow at Political Research Associates, “Dominionism is the theocratic idea that regardless of theological camp, means, or timetable, God has called conservative Christians to exercise dominion over society by taking control of political and cultural institutions.” This is similar to fears over Muslim extremists attempting to invoke Sharia Law in America.

Political Research Associates points out that there is a broad spectrum of Dominionists that range from mild supporters to hardcore believers. According to Clarkson and fellow analyst Chip Berlet, there are three key characteristics of Dominion theology. First, Dominionists celebrate Christian nationalism, in that they believe that the United States once was, and should again be, a Christian nation. “In this way, they deny the Enlightenment roots of American democracy,” Berlet and Clarkson said.

Second, Dominionists promote religious supremacy, insofar as they generally do not respect the equality of other religions, or even other versions of Christianity. Lastly, Dominionists endorse theocratic visions, believing that the Ten Commandments, or “biblical law,” should be the foundation of American law, and that the U.S. Constitution should be seen as a vehicle for implementing biblical principles.

Dominion theology calls for Christians to assert God’s dominion over all mankind, including their communities, secular politics and American society to achieve the fulfillment of their Messianic expectations — to prepare the world for the Second Coming of Jesus Christ. It is rooted in Biblical scripture (see Genesis 1:26-31), where God grants human beings “dominion over all creation.” Dominion theory teaches that Jesus has commanded his followers to begin building the Kingdom of God in modern day, by incorporating the doctrine and principles of the Christian faith into the political establishment with the ultimate goal of creating a Christian nation.

More radical orthodox Dominionists reportedly advocate the abolishment of civil rights, labor unions, public schools and any laws with which they disagree. In addition, they favor withdrawing U.S. citizenship from non-believers, as well as the removal of women from the workforce. Further, they believe federal, state and local government should eventually be replaced with a Christian theocracy, thus empowering religious institutions to run every aspect of the executive, legislative and judicial functions of government.

Their ultimate goal is the creation of a Judeo-Christian nation where the only legitimate voice is Christian. Dominion theory reportedly contributed to the growth of religious fanaticism and extremism among Christians in the U.S. and likely served as a religious foundation for many right-wing extremist views. Such views seem closely aligned with sovereign citizen extremists, among other groups on the alt-right.

This series of articles will delve deeper into how white supremacists, sovereign citizens, militia extremists and violent anti-abortion adherents use religious concepts and scripture to justify threats, criminal activity and violence. This discussion of religious extremism should not be confused with someone being extremely religious.

It should also not be misconstrued as an assault on Christianity, rather it represents an exploration of the links between violent right-wing extremism and its exploitation of Christianity and other religions to gain a better understanding of how American extremists recruit, radicalize and mobilize their violent adherents toward terrorism.