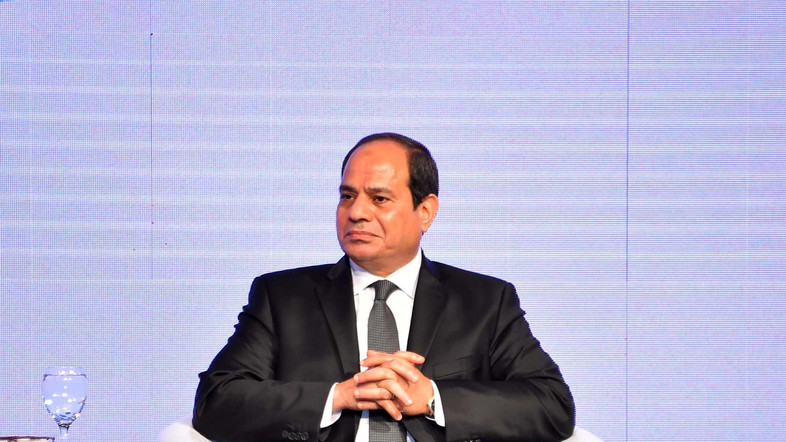 New York – Egyptian President Abdel-Fattah El-Sisi who is in New York for the UN General Assembly session said the time has come to efficiently confront parties that support terrorism and get them to bear their responsibility.

He specifically addressed Qatar and said it must respond to the four boycotting countries’ demands to show that it does not aim to harm Arab countries’ interests or interfere in their internal affairs.

Sisi emphasized the importance of “resuming negotiations between the Israeli and Palestinian sides to reach a comprehensive solution,” the statement said.

The Egyptian president also met with former American officials and with delegations from research centers, Jewish organizations and think tanks on Monday.

Ambassador Alaa Youssef, the president’s spokesperson, said the president welcomed these American figures who contribute to creating the American vision and direct decision-making circles on how to address different international affairs.

El-Sisi also confirmed the importance of strategic relations between Egypt and the US, noting that Egypt is concerned about improving and developing these ties.

According to Youssef, El-Sisi discussed Egyptian developments and said Egypt has been fighting a war against terrorism and extremism over the past years. El-Sisi added that the international community must adopt a comprehensive approach to confront terror groups and deal with funding and arming them and limit their ability to recruit fighters.

Commenting on the situation of human rights in Egypt, Sisi said there is now a constitutional framework that organizes relations between state authorities and gives several jurisdictions to the elected parliament.

He added that Egypt is keen on respecting human rights which must not be summed up in political rights as they must also include economic and social rights.

Regarding the regional situation, Sisi said it’s important not to divide countries in the Middle East as this will lead to more conflicts.

Sisi discussed Egypt’s efforts to revive the peace process and said Egypt supports all international initiatives which aim to reach a fair settlement according to international references.

He added that in the past phase, Egypt talked with the Palestinians in the West Bank and Gaza to narrow the gap and reach a reconciliation so the Palestinian Authority can return to Gaza.

Sisi also said that achieving peace between the Palestinians and the Israelis cannot be imposed by foreign parties as it must be based on both parties’ willingness.