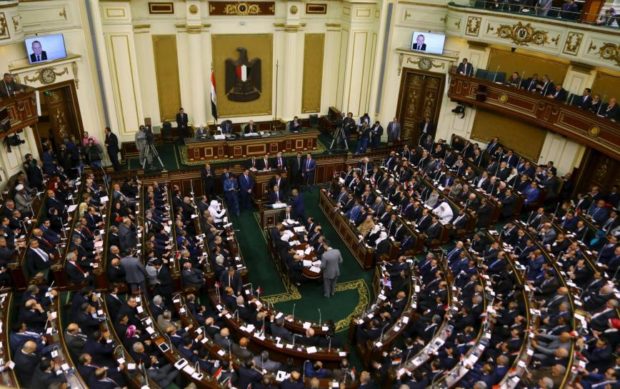 A general view shows members of the Egyptian parliament attending the opening session at the main headquarters of Parliament in Cairo, Egypt, January 10, 2016. REUTERS/Stringer

Egyptian parliamentarians accused Qatar of inciting Human Rights Watch against Cairo, describing a report issued by the organization earlier this month as “politicized and fabricated.”

The deputies based their accusations on a meeting between the Qatari Emir, Tamim bin Hamad Al Thani, and the Executive Director of Human Rights Watch, Kenneth Roth, at the Prince’s residence in New York on Monday during his participation in the 72nd session of the United Nations General Assembly.

According to an official statement issued by the Egyptian Parliament’s Human Rights Committee, it was agreed with Egyptian civil and human rights organizations to put forward plans for external actions, in order to respond to the “international reports that distort the reality of human rights in Egypt.”

In its 63-page report, HRW said: “Torture has become a systemic practice in Egypt.”

Sharif al-Wardani, the parliamentary committee’s secretary, described the HRW report as politicized, and linked it to the meeting of the Qatari Emir with the director of the organization.

In remarks to Asharq Al-Awsat newspaper, Wardani stressed that there was a role for Doha in the report “which cannot be treated seriously, or considered as professional or neutral”.

He also noted that the members of the Committee would be meeting soon with the Egyptian foreign ministry to agree on a mechanism to collect evidence that would uncover the involvement of officials or Qatari institutions in the incitement against Egypt, with the aim of bringing them before international courts, especially with regard to financing the murder of Egyptian soldiers.