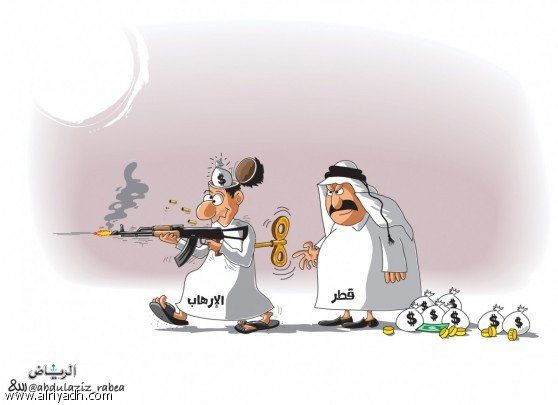 It seems to be increasingly clear that the default position of the Qatari government when it finds itself facing political difficulty is to spend billions of dollars on defence deals aimed at securing its survival.

One of Doha’s first actions after the quartet of Arab states prompted a diplomatic rift earlier in the summer with the Qataris over their support for Islamist terror groups and ties with Iran was to sign a US$12 billion (Dh44 billion) deal with Washington to buy a new fleet of F-15 fighters.

This has now been followed by the Qataris this week signing a memorandum of understanding with the British arms firm BAE Systems to buy 24 Typhoon fighters at a cost of about $2.6 billion.

In addition, Doha last year agreed to buy 24 Rafale fighter jets from France for an estimated $7.5 billion soon after the initial rift between Qatar and other leading GCC states arose over its terrorism link in the summer of 2015.

Military experts say that Qatar’s massive investment in high-tech military equipment is out of all proportion to the requirements of a country of 2.6 million people, of whom just over 300,000 are Qatari citizens. They also fear Doha’s investment in such an excessively large number of warplanes could prompt a new arms race in the region, one that could lead to further instability at a time when tensions are already running high.

No Western diplomat I’ve spoken to seriously believes that the current stand-off between Qatar and the quartet will result in military action of some form between the Gulf states. But the Qataris are clearly taking no chances and, in addition to the massive arms purchases, the Qataris have also increased their military co-operation with Turkey, which has deployed about 1,000 troops to the sheikhdom, as well as a contingent of combat aircraft.

There have even been reports that Iran’s Islamic Revolutionary Guard Corps has been protecting the Qatari emir Sheikh Tamim inside his palace, as well as providing training to the Qatari security forces.

The Qataris’ enormous investment in new military hardware certainly raises a number of questions about Doha’s relations with key Western powers like Britain in the wake of the diplomatic dispute, as well as increasing tensions with its regional neighbours.

From Britain’s point of view, the Typhoon deal makes good business sense at a time when Whitehall is looking for new trade opportunities post-Brexit. It represents Britain’s biggest export deal for Typhoon fighters in a decade and helps BAE Systems to overcome the frustrations it has encountered with Saudi Arabia over Riyadh’s plans to add to the fleet of 72 Typhoons which it purchased in 2007, and which have performed admirably in the Saudi-led military campaign in neighbouring Yemen. BAE’s share price rose by nearly 4 per cent immediately after the deal was announced by British defence secretary Sir Michael Fallon, who is currently touring the region.

The Qatari deal will certainly not be well-received in Riyadh, which continues to demand that Doha end its support for Islamist extremists, such as the Muslim Brotherhood, as well its close relationship with Tehran.

The Saudis responded immediately on Wednesday, announcing a new military and security co-operation agreement with the UK, which Sir Michael signed with Saudi Crown Prince Mohammed bin Salman during a visit to Riyadh. Commenting afterwards, Sir Michael said the agreement “further cements the UK’s long-standing relationship with our key Gulf partner”, and that the co-operation agreement will inevitably raise expectations in London that the Saudis will soon announce a new Typhoon deal of their own.

But relations between Western powers like Britain and the Gulf depend on a great deal more than arms deals, with co-operation on security and intelligence-gathering, as well as wider trade links, deemed to be just as important.

And it is for this reason that Britain’s decision to sell a new generation of warplanes to Qatar at a time when it stands accused of supporting Islamist terror groups will inevitably raise questions about the wisdom of concluding the deal at this time.

At a time when Britain is continuing to suffer from ISIL-sponsored terror attacks, such as last week’s bombing of a tube train at London’s Parson’s Green station, the British government’s priority is to tackle Islamist extremism. In this context, the fact that the US led-coalition’s main military headquarters in the war against ISIL in Iraq and Syria is based at Qatar’s Al Udeid complex means countries like Britain and the US need to maintain good relations with Doha.

But by the same token, these same Western powers are well-aware that Doha has a long and undistinguished history of supporting extremist groups such as the Muslim Brotherhood and the Taliban, which are bitterly opposed to Western interests.

Qatar’s policy of double-dealing, where it seeks closer ties with the West, while at the same time supporting and financing extremist groups that seek to do it harm, is the fundamental quandary that today faces Western policymakers and one that is unlikely to be resolved by the sale of two dozen state-of-the-art warplanes.

The real test, though, of Western resolve to maintain friendly relations with Doha would come if the Qataris were ever tempted to use their new military firepower to support their ill-chosen terrorist allies in the Arab world. Such an act of folly really would cause the West to undertake a wholesale change in its attitude towards Doha.