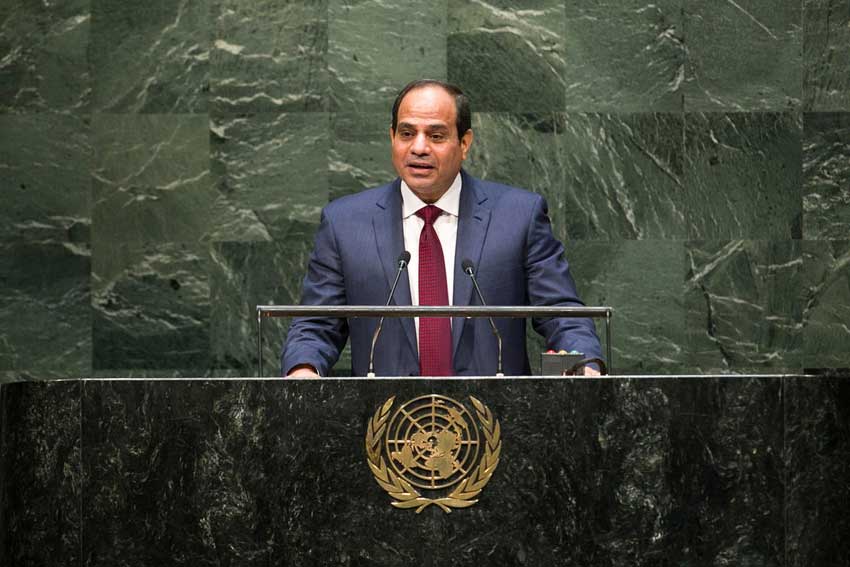 Cairo – Combating terrorism at the regional and international level is the top priority on the agenda of the current visit of President Abdel Fattah El-Sisi to the United Nations. According to a report prepared by State Information Service, Egypt’s interest in this issue has gained more importance at this session of the UN General Assembly than the previous three sessions.

This is due to Egypt’s success in convincing the world of its vision which reflected, over the last three years, the necessity of a comprehensive confrontation with terrorism that is not restricted to the direct military aspect -despite its importance- as the world community is now more convinced of the necessity of the ideological confrontation of the terrorist ideas, blocking sources of financing terrorism and chasing its supporters, as well as those who provide its elements with funding, political support, safe havens and media channels that justify their terrorist crimes and spread their erroneous ideas to generations of young people around the world.

The world has become more aware of the importance of this integrated Egyptian vision in facing terrorism and has become more willing to respond to the Egyptian efforts to enact the sanctions measures, of the United Nations Charter, towards states and organizations that support terrorism in any form of financial, political, media or logistical support, which Egypt called for during its presidency of the meetings of the Security Council last month.

Egypt has proceeded through the international diplomatic structures particularly the United Nations to enhance the overall international confrontation with terrorism.

SIS report highlights the fact that Egypt has adopted a comprehensive counterterrorism strategy in recent years, beginning with the overthrow of the Muslim Brotherhood from ruling. Since President Abdel Fattah El-Sisi had assumed office, an internal and external war has been launched against extremism and radical groups. Besides, the Egyptian diplomacy has exerted enormous efforts on the platforms of the United Nations, the Security Council and the Western capitals to mobilize for the major battle against terrorism, which threatens Egypt and the countries of the region and the world.

Egypt has dealt with the phenomenon of terrorism on various local, regional and international levels. It had also confronted the selective vision of the Western States, stances towards terrorism and worked on convincing the key influential countries on the importance of adopting a comprehensive vision stemming from the conviction that all terrorist organizations emanates from one conceptual and ideological frame regardless of their different forms and objectives. Egypt has also worked on enhancing bilateral relations with the world powers in the field of counter-terrorism in a manner that serves the Egyptian interests and the national efforts of facing the terrorist threats.

On the international arena, in his address to the 71st session of the United Nations General Assembly on 21/6/2016, President El-Sisi confirmed that terrorism is the scourge of this era which is fuelled by the calls of extremism and violence to the minds of the people, stressing that “we have to implant in these minds the values of coexistence and accepting the other. Since culture is the feedback of the system of values upon which the human being lives, so we have to harness culture and technological capabilities to the best interest of development and establish peace.”

On the regional level, in his address to the Arab-Islamic American Summit, held in Riyadh on 21/5/2017, El-Sisi confirmed that the danger of terrorism is “posing an immense threat to the peoples of the whole world,” pointing to the fact that its confrontation and eradication “require, along with security and military measures, a comprehensive approach including the political, ideological and development dimensions.”

In culmination of Egypt’s efforts in fighting the ideologies of terrorism, the Egyptian mission to the UN succeeded to pass unanimously the Security Council resolution on 25/5/2017. The resolution welcomes and enforces the comprehensive international framework on combating the terrorist discourse. Such a framework is that Egypt had previously succeeded to unanimously pass as an official document of the Security Council under the number 2354.

In his speech to the Security Council, Ambassador Amr Abul Atta, the Permanent Representative of Egypt to the United Nations, referred to the Egyptian efforts for achieving a consensus in the Council over a comprehensive international framework for fighting the terrorist discourse; highlighting the importance of the intellectual and ideological dimensions within the universal war on terrorism that promotes poisonous ideas in order to justify its crimes and recruit youths; or even pushing them to committing suicide, believing that they do a noble heroic action worthy of self-sacrifice.

Abul Atta asserted that Egypt realized early the necessity of combating the terrorism discourse, pointing to its valuable contribution to combat this discourse through its time-honoured religious institutions that the whole world respects and appreciates mainly “Al Azhar”. Abul Atta emphasized that the comprehensive confrontation with terrorism necessitates, dealing with all the terrorist organizations without any exception, as well as opposing, whoever gives any help either in finance or armament or providing any political, ideological and media support.

It is worth mentioning that Egypt was elected a non-permanent member of the Security Council for the years 2016 and 2017, with a large support by the General Assembly, which is considered an appreciation for Egypt and its role in maintaining the international peace and security. Moreover, Egypt headed the committee of combating terrorism in the international Security Council. Within this frame, Egypt launched many initiatives that aimed at supporting the international cooperation and coordination within combating terrorism and finding out permanent solutions to uproot the phenomenon of extremism.

After June 30th Revolution, Egypt had faced a concentrated retaliatory campaign by terrorists and extremists who belong to the Brotherhood and other terrorist groups. Hence, combating terrorism come at the top priorities of the Egyptian national security. Egypt had intensified its local, regional and international efforts for combating terrorism, which has been growing all over the world. Moreover, Egypt is a pivotal member in the international coalition for combating the Islamic State in Iraq and Levant (SIS), codenamed in Arabic “Daesh”, especially that it has a vital role in combating and refuting the extremist ideologies, through “Al Azhar” and “Dar al-Ifta” which are considered the most important center for the Islamic moderate thought all over the world.

Concerning Egypt’s local efforts, President Abdel Fattah El-Sisi issued a decree upon which a national council for combating terrorism and extremism would be established to rally international and societal energies to restrict the causes of terrorism and address its impacts.

The council is competent to approve a national comprehensive strategy to face terrorism and extremism domestically and abroad as well as coordination with the religious institutions and security agencies to empower the moderate religious discourse against the rigorous one with all its forms.

Moreover, the council draws up plans for providing job opportunities in the regions of extremism, locally and internationally, proposing amendments of the existing legislations to face shortcomings of procedures in order to reach the effective justice and promoting coordination and cooperation system among all security and political apparatuses with the international community especially the neighboring countries and seeking establishment of a special regional entity between Egypt and Arab countries to be in charge of coordination with agencies concerned with combating terrorism and organized crime.

Also, the council seeks to coordinate the Arab situations towards the terrorism issues, approve the required plans to inform the international community about the reality of the terrorism organization and the role of the countries, organizations and movements that support terrorism against the Egyptian state. In addition, the council will ensure taking necessary legal measures against agencies and the terrorism- supporting countries against the Egyptian state. In addition, the council will seek to determine the required development axes in curriculum in order to support the principle of citizenship, denounce violence and extremism and follow up the implementation of forefeiture of the terrorist entities funds as well as monitoring the financial transformations for of the terrorist elements and organizations for blocking finance of extremism and terrorism. Out of these important efforts in facing terrorism, the file of facing terrorism and mobilizing the global efforts to uproot it are considered Egypt’s top priority in the current UN session of the General Assembly, where President Abdel Fattah El-Sisi leads the Egyptian delegation.