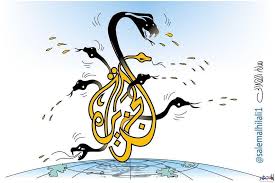 Al-Jazeera promotes extremists agenda through its Arabic and English channel.

Cairo – On the sidelines of the UN Human Rights Council’s 36th session, the Arab Federation for Human Rights addressed the subversive role of the Qatari state-led media outlets in spreading hate and violence in the MENA region.

“It is no longer acceptable for the media, including the Qatari ones, such as Al-Jazeera, to be immune from liability for the damages afflicting the region,” said Dr. Ahmed Hamli, president of the Arab Federation, adding that the organization always stands up for the freedom of expression of the media means in all its forms, notwithstanding its appreciation for the rights of each to uphold national security and peace.

“Media that incites violence, consequently spurs the occurrence of terrorist operations, and many terrorists were proven to have been linked with Al-Jazeera,” said the writer Abdulaziz al-Khamis and one of the participants at the Arab Federation seminar titled, “The Media and Terrorism in the Middle East and the Role of the Qatari Media in Spreading Hatred and Violence in the Region.”

He highlighted Al-Jazeera’s direct links to terrorists, such as the late al-Qaeda leader, Osama bin Laden, saying that Al-Jazeera used to ask him to dub bin Laden as “sheikh” during his phone-ins, aiming to glamorizing him,” further pointing to Al-Jazeera’s hosting of Mohammad al-Julani the founder of ISIS offshoot al-Nusra front.

He also accused the Qatar-sponsored media of “promoting the slaughter of Copts in Libya, and perceiving terrorist organizations and groups as resistance groups.”

Khamis concluded by calling on European countries to firmly stand against Al-Jazeera, praising Canada’s decision to impose a ban on Al-Jazeera.

The Arab Federation for Human Rights (AFHR) submitted a report on Friday to the National Institutions and Regional Mechanisms section in the Office of the United Nations High Commissioner for Human Rights, dusting off the crimes and violations committed by the Qatari region.