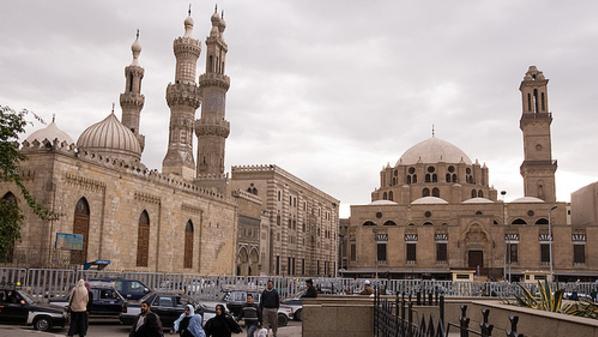 Al-Azhar’s role and critics.. How Islamic institution is part of Egypt’s soft power

Al-Azhar’s role and critics.. How Islamic institution is part of Egypt’s soft power

Cairo – Egypt’s Al-Azhar is considered one of the most important elements of Egypt’s soft power, as it stands resolute against the Muslim Brotherhood. Egyptians will never forget the uniting image on July 3, 2013, of his presence at the announcement of the revolution’s success against then-President Mohamed Morsi.

However, the institution faces increasing campaigns to undermine the important role of the Islamic institution during the current critical period in the country despite its role to combat terrorism and the extremist ideas promoted by the terrorist groups.

Egyptian expert Mohamed Rabei said that such campaigns are not based on a real understanding of the components of the Egyptian power. He stressed that Al-Azhar is considered one of the major elements of Egyptian power, saying that it is very limited number of those people belonging to the Islamic institution who involve in terrorist actions or incitement.

The role of Al-Azhar to confront extremism has not begun after the fall of Morsi’s regime, while it started earlier. Al-Azhar’s Grand Imam Ahmed Al Tayeb launched a number of initiatives after January 25 Revolution calling the people for unity to restore security and stability. He also expressed resentment over the policies adopted by the Muslim Brotherhood warning of the repercussion of division that hit the country during that period.

Egyptian high-profile journalist Abdel-Latif Al-Manawy said that Al-Tayeb is seen by the Egyptian people as a symbol of enlightenment, stressing the importance of his role not only to combat terrorism but also to contact directly with the people to correct the false ideas that broke the image of the religion.

Al-Azhar’s educational curricula are considered one of the main challenges that face the grand imam during the current period, Al-Manawy said. He added, “I object to parts of its curriculum that involve violence, sectarianism and incitement to hate people from other religions. This goes against logic and the spirit of tolerance that should be the basis of any faith.”

He added that it is not fair to blame only the ideas promoted by terrorists, saying that the major responsibility of the Islamic institution during the current period is to review its curriculum.