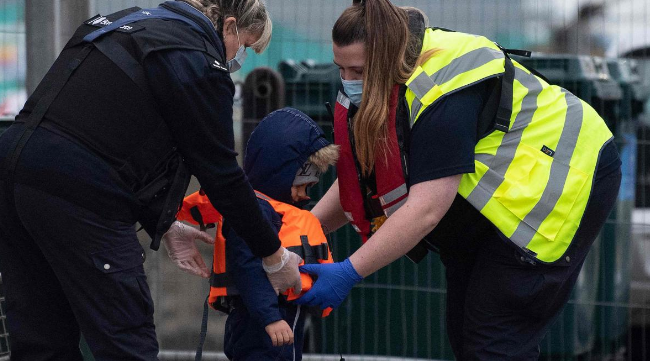 Traffickers are sending of child refugees to Britain

More than 2,000 child refugees who arrived in the UK in the past four years were victims of human trafficking, new figures show.

Of these, 2,008 children were confirmed to have fallen prey to traffickers. The rest were either assessed not to have been trafficked or had their cases closed without official judgment.

In 2019, the number of unaccompanied refugee children referred to the Home Office’s national referral mechanism reached a high of 1,034, meaning more than a quarter of the 3,775 child refugees who came that year were suspected victims of slavery or trafficking.

Once a child has been referred to the scheme, investigators assess whether they have been trafficked, and those that have are given long-term support. Across the four years, in more than 75 per cent of cases, investigators found that refugee children had been victims of traffickers.

Child refugees, who typically arrive from countries including Afghanistan, Sudan, Iran, Eritrea and Vietnam, are extremely vulnerable and many are known to be at risk of sexual abuse and exploitation by gangs.

In October, The Times revealed that young refugees had gone missing from care more than 700 times in the previous 12 months, including 37 aged under 13. It is feared that some have been kidnapped by traffickers who plan to force them into modern slavery.

Enver Solomon, chief executive of the Refugee Council, said: “This data reveals just how many children coming to the UK seeking asylum are highly traumatised, having been through the horrific experience of being controlled by abusive traffickers whose sole aim is to exploit them.

“It’s vital all necessary steps are taken by the police, social services and the Home Office to ensure they are kept safe as soon as they arrive here and their asylum claim is quickly processed.

“What they have been through is unimaginable and they need a high level of support to overcome their trauma and rebuild their lives.”

The national referral mechanism, the Home Office’s system for identifying and assessing potential victims of slavery or trafficking, aims to ensure they receive the right support and care.

Young asylum seekers may be referred due to trafficking they experienced on their way to the UK, or once they arrive. Many will experience both.

Charities and experts, including the government’s own anti-slavery commissioner, have warned that the new Nationalities and Borders Bill could make it harder to prosecute human traffickers and may deter victims from seeking help.

Iain Duncan Smith, the former Tory leader who proposed amendments to the bill, said that the figures showed how important it was for the law to give young refugees time and support. He said: “We must separate those who have been trafficked from those who are economic migrants.

“Those who have been trafficked are victims of modern slavery and we must ensure that they have the proper support necessary to remain settled. And the police say that once they are in that state they are much more likely to be able to give evidence to put the people who trafficked them behind bars. The bill has to make sure it takes that into consideration.”

In a joint letter released on Thursday, Dame Sara Thornton, the anti-slavery commissioner, and Dame Vera Baird, the victims’ commissioner for England and Wales, said the bill “singularly fails to grasp the realities of being a victim”.

They wrote: “Trauma can have a profound impact on recall and will mean that narratives emerge piecemeal over time as trusting relationships develop.”

An average of 78 migrants crossed the Channel every day last year as the annual total hit a record 28,381.

People smugglers ferried them across in a total of 1,020 boats — an average of three boats a day — with hundreds more stopped by the French.

The annual total of migrants who arrived in small boats was more than triple the previous record number of crossings for a single year — recorded in 2020, of 8,420.

Despite the record number of crossings last year, government officials are expecting higher numbers this year as the new powers in the Nationality and Borders Bill, such as offshore asylum processing, will take more than a year to come into effect.

Furthermore, a deal to return migrants to France and other European countries is unlikely to materialise for months, if at all. Ministers have given up on a new agreement with France before April’s presidential election.

One government source said: “If it looks bad now, it’s going to look much worse in spring when it’s warmer.”

She said: “It’s not right that taxpayers will be footing the bill this year, and for years to come in assessing claims, emergency housing and more besides. Money would be better spent strengthening our borders.”

By far the busiest month was November when 6,869 migrants arrived in 201 boats. It also included the record day, when 1,185 migrants arrived in 33 boats on November 11. November brought the gravest tragedy in the Channel since migrants started navigating the world’s busiest shipping routes by small boat on mass.

At least 27 men, women and children died after their rapidly deflating dinghy, with a broken motor, sank in the freezing cold waters. Only two people are known to have survived.