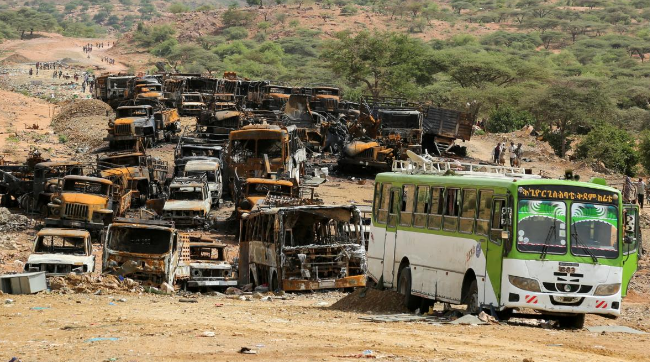 Ethiopia’s civil war has become a testing ground for military drones that has made its people “guinea pigs”, rebel leaders have claimed.

Multiple purchases of armed surveillance drones at a fraction of the cost of fighter jets and bombers have provided Ethiopia’s leader, Abiy Ahmed, with a war-winning weapon that has forced the Tigray People’s Liberation Front (TPLF) into retreat.

The rebels in the northern Tigray region of Ethiopia have been fighting government forces since Abiy launched a military campaign in Tigray in November 2020.

The conflict has been marked by reports of atrocities, including civilian massacres and mass rapes, by both sides. The United Nations has expressed concern over reports of large-scale displacement from western Tigray. Just 12 per cent of the food and other aid needed in the region has been delivered because of violence and blocked routes, the United Nations reported this week, with women, children and elderly most in need.

Abiy was awarded the Nobel peace prize in 2019 but his tendency to use words such as “cancer”, “disease” and “weeds” to describe the once-dominant TPLF has cast doubt on his appetite to use the rebels’ withdrawal as an opportunity to strike a peace deal.

Initially the rebels made such progress that they were within striking distance of Debra Birhan, 75 miles from the capital Addis Ababa. The government was facing a violent overthrow.

The TPLF claimed it “never had ambitions to regime-change or take over Addis”. The drone strikes on its convoys and supply lines made further progress impossible.

Getachew Reda, TPLF spokesman, denounced the countries selling their “deadly toys being operated from elsewhere in the world”.

“Our land has become a testing ground for different weapons technologies and our people are the guinea pigs,” he said.

“We have no idea what is being used against us, there are reports of different kinds of injuries and the eyes of the world are not on what is being done and what experiments are being carried out.”

The dramatic change in fortune for the TPLF and the role that armed drones have played highlights how the concept of warfare has been transformed in recent years. With drones and foreign expertise to operate them, the Ethiopian government has been able to gain aerial superiority over rebel forces that have neither the weapons to fight back nor any form of air defence to protect themselves.

Success for the government in Addis Ababa will be studied closely by other small nations needing to arm against internal or external adversaries. It will also boost the export of armed drones by countries that have developed their own technology such as Turkey, Iran and the United Arab Emirates.

“It’s no longer just the big powers such as the US, China, Russia, UK and France producing armed drones,” said Paul Scharre, a former senior Pentagon official who helped develop US policy on drones and is author of the award-winning Army of None: Autonomous Weapons and the Future of War.

“Turkey and Iran are selling significant numbers abroad and for countries that can’t afford fighter aircraft — this is a game-changer. It means these countries can have air power at a much lower cost. The drones also perform surveillance missions, thus changing the whole tactical landscape.

“Clearly they are not as advanced as F-35 stealth fighters but these countries [such as Ethiopia] don’t need F-35s or F-16s because armed drones provide them with the level of air power that suits their requirements.

“Drones also provide other advantages over the traditional fighter aircraft. They have longer endurance and can provide vital surveillance of the battlefield, allowing for precision strikes.”

Drones had a significant impact on changing the battle landscape in the Nagorno-Karabakh conflict in 2020 when Azerbaijan, supported by Turkish-supplied drones, won a 44-day war against Armenia for control of the disputed enclave. Turkish drone airpower also saved Tripoli in the war in Libya between the government of national accord (GNA) and the forces of retired Major-General Khalifa Haftar.

In Ethiopia, the Addis Ababa government began purchasing armed drones about a year ago. Turkey, with its Bayrakter TB2, and Iran, selling its Mohajer-6, were willing suppliers. The United Arab Emirates provided China’s Wing Loong-2 drone.

Each Bayrakter drone costs around $5 million and can carry four small laser-guided missiles. The Chinese drone is about $2 million and is armed with eight weapons, while the Mohajer-6, at an estimated $2 million, is fitted with two missiles.

Ninety per cent of armed drone transfers come from China. But with the US reluctant to sell its Reaper and other drones abroad, even to allies, countries such as Turkey and Iran have moved in to snatch some of the export potential from the Chinese.

Stacie Pettyjohn, director of the defence programme at the Washington-based Centre for a New American Security, said: “This spectrum of drone capability is like an air force on the cheap for the Ethiopian government forces. They acquired these drones, initially from Iran, then the Chinese ones from the Emiratis and finally the TB2 from Turkey, which allowed them to spot rebel ground troops and carry out precision strikes.

“The TB2 can stick around for about 24 hours, so they could find rebel forces who had no way of defending themselves.”

The Tigrayans, she added, were trying to acquire an effective counter to the drones. “But air defence systems are more sophisticated and expensive.”

Meanwhile, the Abiy government is seeking to pass a supplementary budget of $2.5 billion to help rebuild areas destroyed in the civil war. It is unclear whether any of it will be used to buy more drones.

The use of armed drones is no longer a choice solely for nation states. Modified commercial drones fitted with makeshift explosive devices in the hands of terrorists and jihadist insurgents is already a reality (Michael Evans writes).

Four years ago Isis revealed in a progaganda video that it had developed its own bomb-carrying quadcopter drones. The off-the-shelf drones not only proved effective weapon systems in Iraq and elsewhere but also demonstrated the heightened publicity value of such attacks from the air.

Drone strikes create a greater sense of vulnerability than even a fighter bomber flying overhead and generate more media attention.

The innovative methods used by Isis will have encouraged other non-state actors engaged in conflicts around the world to devise their own drones.

However, more alarming is the possibility that terrorist organisations might be able to get their hands on bigger and better drones now that the export market has expanded so rapidly.

China has shown no hesitation in offering its drones to overseas customers. Its CH-4 drone which looks like the US Reaper although is not as technologically advanced, has been sold to Jordan, Saudi Arabia and Iraq.

More than 100 countries now have armed or surveillance drones. The potential for such systems to end up in the wrong hands must be high.