Latest Posts
16:56
Home investigations We were free to fly, say Afghan women. Then the Taliban threatened to attack us with acid 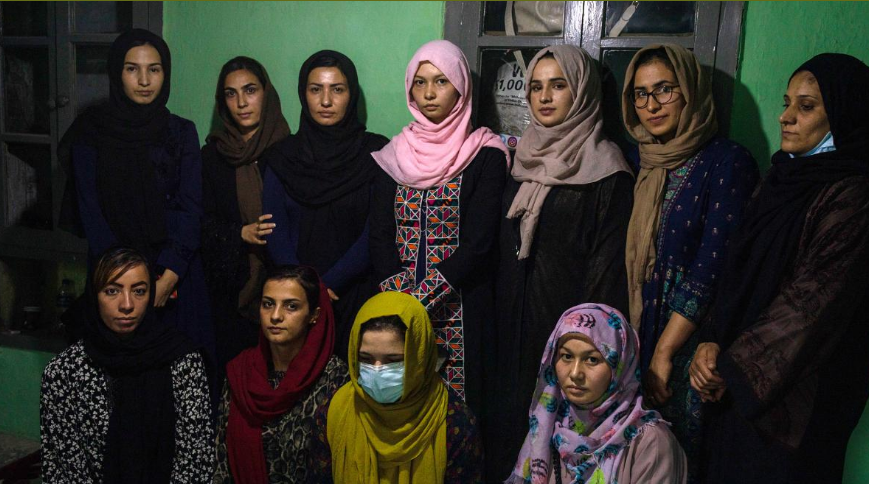 We were free to fly, say Afghan women. Then the Taliban threatened to attack us with acid

Awillowy young woman in a floor-length black and white dress beckons silently from behind a garage on a hillside in eastern Kabul. She leads the way into a yard, past a scraggy ginger cat and up some stone steps.

At the top is a pile of women’s shoes. Beyond is a room with peeling paint and curtains closed where a small group of women are gathered, looking weary and afraid. For four months they have lived, slept and eaten in this one room, their hiding place since the Taliban took over their country in August.

“We know the Taliban and what they will do to us,” said Sarween Sultani, 27, the woman in black and white. “We wore skirts and travelled the world — 100 per cent we are in danger.”

Their crime? They are air hostesses.

From a bag hidden under some clothes, Basira, 24, takes out copies of the inflight magazine for the state carrier Ariana Afghan Airlines, with pictures of them in uniform, in navy suits with bright blue scarves. “That’s me on the cover,” she said. “I was so proud.”

Now she fears for her life. “Even in our planes, the Taliban threatened us,” she said. The other women nod. Earlier this year some served as cabin crew on flights carrying Taliban leaders to peace negotiations. Their passengers told them, disapprovingly: “You’re not dressed like Muslims.” Handcuffed Taliban prisoners on their flights also snarled at them: “If we get free we’ll come after you.”

“They said: ‘We’ll throw acid on your face’,” added Sarween. “People talk about the female judges, police and MPs but we are just as much in danger. Our future is only darkness.”

The last flight any of them worked on was on August 15, the day Kabul fell to the Taliban. At 3am that morning, a few of the women were picked up for a 6am flight to Zahedan in southeast Iran. Others were due to work on an 8pm flight to Istanbul in Turkey but so many people were rushing to the airport and clinging on to aircraft, it was impossible to get to the aeroplane. Then, at about 10pm, the Taliban arrived at the airport and everyone fled. “It was terrifying,” said Tamana, one of the stewardesses waiting to board. “Even in a movie I haven’t seen such scenes.”

Now they all live, eat and sleep in one room — the abandoned annexe of a relative of one of them. Initially there were 11 women, but two sisters managed to escape the country last month. The women share a tiny bathroom, have one gas ring to cook on and sleep crammed together on the floor. Occasionally one slips out clad in a niqab to the market to get food. Footsteps outside make them jump. “The days are so long,” said Sarween. “We just talk about past times. We feel hopeless.”

They take turns to cook and clean and spend much of the time on the internet, desperately trying to find ways to escape.

Women educated to think that they could pursue careers of their own are in hiding all over Afghanistan, left behind and all but forgotten in the aftermath of the chaotic evacuation of Kabul.

A Foreign Office official last week described the government’s mishandling of the evacuation as “unforgivable”. Speaking anonymously to the BBC’s Newsnight, she said ministers were more focused on media coverage and “the political fallout” than saving lives.

Another Foreign Office whistleblower, Raphael Marshall, had claimed that the prime minister had pushed for animals to be rescued at the “direct expense” of humans, referring to Pen Farthing, the former Royal Marine who was able to fly out 170 rescue cats and dogs.

While many women, including female MPs, judges and journalists, have managed to flee with the help of international sponsors, others are marooned in Kabul.

“We’ve been exiled in our own country,” said Ramika, a young woman who has been hiding in a room filled with guitars, where she used to teach music. She has covered the instruments in black cloths, fearing the Taliban might destroy them. The last time they were in power, in the early 1990s, all music was banned. One of the country’s first female rappers and a women’s rights activist, Ramika also worked in the presidential palace and at the American embassy. “I am everything the Taliban hate,” she said.

Now she is alone in Afghanistan, having used her savings to get her parents and sister out. “Not only do I have the Taliban after me but also my brother-in-law, who is from a powerful family.”

Initially she stayed in the family home. Then a university friend, an art therapist and fellow guitarist, offered her space in her room. “We sit on the roof every night looking at the stars and crying for our lost futures.”

Life was never easy for many of these women, even before the Taliban takeover. “We were women travelling day and night, cars picking us up from home at strange times so people were thinking wrong things,” said Sarween. “Our own families didn’t want us to do it.”

All the women are single — anyone who got engaged was told to stop working by their in-laws. It was their salaries — 30,000 Afghani per month (then about £300), above average earnings — that convinced their families, the women said. “Most of us were breadwinners for our families,” said Tamana, 28, one member of the air crew.

“I was a teacher and my family were not allowing me to be an air hostess, just ignoring me when I talked about it. But my father retired … and we didn’t have enough money, I was earning just 5,000 Afs (£50) a month, so I persuaded them to let me.” She said: “I loved the job because I got to travel, meet different people, cultures. I flew to Russia, Turkey, China, Delhi, Dubai … I went sightseeing in Istanbul.”

Ariana Afghan Airlines had 32 hostesses and becoming one of them was a competitive process. “You have to be tall, beautiful, [to have] completed 12th grade, speak Pashtu and Dari then do an interview — only one in five go through,” said Tamana. Each successful applicant underwent six months of training, including English lessons.

“I’ll never forget my first flight six years ago,” said Sarween. “It was my big dream to be cabin crew and go up into the clouds. Now my dream is in tatters.”

After the Taliban takeover the women were told by their supervisor to stay at home and have since heard nothing from the airline about their future. Domestic flights have restarted using male cabin crew. Initially they stayed in their homes but after a few days they fled, leaving their uniforms behind.

Although women, apart from teachers and medical staff, have been told to stay home by the Taliban — and girls have been ordered not to attend high school — a few tentative steps towards progress have been recorded in recent weeks.

Secondary schools have readmitted girls in a few provinces and some beauty salons have reopened, albeit with the glamorous photos in their windows painted over in black. Female anchors at the main private television channel, TOLO TV, have been allowed to carry on working but 80 of the 400 staff have fled. Having at first taken all soap operas off air, the channel has now restarted period dramas.

The private airline Kam Air recently resumed international flights and told its stewardesses they could come back. Allowing women to work on the state airline, however, is a step too far. “The Taliban will not allow this,” said Mezghan, who had joined Ariana with her sister. “I don’t know what will happen to us, we don’t have any future in this country.”

She is dressed in a floaty pink creation printed with butterflies, and had also worked as a fashion designer but when the Taliban took over she quickly deleted her Instagram account.

After we met, she and her sister managed to get out of Afghanistan to the United Arab Emirates through a foreign contact. The nine others are stuck in the hidden room for the time being, hoping the phone will ring with the offer of an escape route into the clouds — and out of their country.

They are starting to lose hope, though, fearing the world has forgotten them. “We watch Kim Kardashian help other girls [she flew a junior women’s football team to Britain last month in a partnership with Leeds United football club] but no celebrity is interested in us,” said Sarmeena. “Even cats and dogs were flown out. We’re just stuck here in this room staring at the walls.”