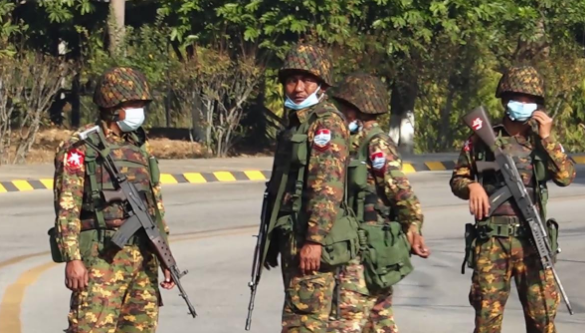 Villagers ‘tortured and killed’ in revenge attacks by Myanmar military

The military in Myanmar tortured and killed more than 40 civilians in villages known to be opposition strongholds in the centre of the country.

Soldiers attacked civilians in four separate incidents in Kani Township, in the northwestern Sagaing region, in July, according to a BBC investigation.

Men from the villages were taken, beaten and tortured, then buried in shallow graves. Videos shot on phones by villagers and photographs from UK-based human rights group Myanmar Witness appear to corroborate the reports from local witnesses and survivors.

The area is home to militia groups that have been fighting the military junta since it seized power from the government of Aung San Suu Kyi in a coup in February. The assault on the villagers are believed to be revenge for attacks on the junta by the People’s Defence Forces militia, which was set up in opposition to the coup.

The local independent news organisation Myanmar Now reported on torture and killings in Yin village in July, where the bodies of blindfolded and bound victims were found in forests near the villages.

A man who escaped the killings at the time told the BBC that the soldiers, some who appeared to be teenagers, tortured the villagers horrifically for hours before killing them.

In another village nearby, mutilated bodies, including what appeared to be a child and a disabled person, where found in shallow graves in July. A grandfather in his 60s was found tied to a tree near by, also appearing to have been tortured to death. His family said he had not fled when the army came as he had believed he was too old to be targeted.

Men in villages across the country have been attacked by the army as a form of collective punishment for opposition to the junta by local militias.

General Zaw Min Tun, Myanmar’s deputy minister for information, told the BBC: “It can happen. When they treat us as enemies, we have the right to defend ourselves.”

More than 1,300 civilians are reported to have been killed by the military since February.

Today the trial of deposed leader Aung San Suu Kyi for illegally importing and possessing walkie-talkies was adjourned until December 27. The charges carry a maximum sentence of three years, though members of the government forces who raided her house admitted in court that they did so without a warrant.

Suu Kyi has already been found guilty of breaking pandemic rules and faces a catalogue of charges, including corruption, which could see the Nobel laureate imprisoned for life.