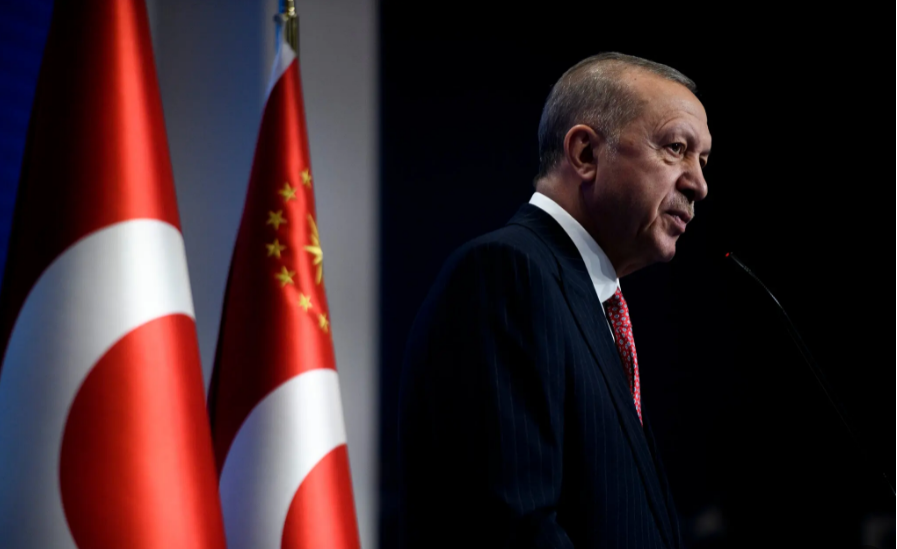 Turkey’s President Follows His Own Advice Even as Economy Slips

President Recep Tayyip Erdogan sat for an interview on national television late last month, apparently seeking to calm nerves about Turkey’s weakening currency and galloping inflation. But the reaction has been anything but calm.

He insisted there was “no turning back” on his newly announced economic plan, which has promoted policies that seem aimed at defying the laws of economic gravity, like refusing to tick up interest rates to combat rising prices and buttress the value of his currency.

“Interest rates make the rich richer, the poor poorer,” he said. “We have prevented our country being crushed in such a way. We will not allow this.”

Turkey’s currency, the lira, began sliding virtually as he spoke, capping a day in which it lost 8 percent of its value. It has hardly stopped plunging since mid-November, hitting new lows every few days. Turks have watched staple goods double in price and fuel costs jump by 40 percent.

But Mr. Erdogan keeps talking — and rattling markets and eroding confidence in the lira and his stewardship of Turkey — as he doubles down on a policy prescription that few if any economists agree with and that has left suffering Turks and others wondering why he is doing what he’s doing.

Mr. Erdogan has been in power for nearly two decades, with much of his political success built on nearly continuous economic growth that has lifted millions of Turks into the middle class. Facing re-election in 18 months, he is sliding in opinion polls, largely because of the deteriorating economy. His focus is how to turn around the decline in time to boost his election chances.

“He is trying to keep the boat afloat in his own way,” said Akif Beki, who served as chief adviser to Mr. Erdogan when he was prime minister. “He believes that he can turn things around and he can convince people again when elections come closer.”

But for now, markets and analysts agree, his medicine is making what ails Turkey worse, and Mr. Erdogan has become increasingly isolated in his economic plan, having narrowed his circle of advisers since his early days as he gathered up virtually authoritarian power for himself.

In particular, Mr. Erdogan’s switch to a strong presidential system in 2018 has made him more reliant on a small inner circle rather than the wider scope of party officials and elected politicians under the earlier parliamentary system. That has given rise to criticism that he is surrounded by yes-men and increasingly detached from the electorate — and economic realities.

Mr. Erdogan has replaced a series of Central Bank chiefs and finance ministers in recent years, confident that he knows the economy better than any of them and reasoning that by controlling monetary policy he could make decisions more efficiently.

“He is not listening to the economists which is typical of strongmen,” said Ozgur Unluhisarcikli, the director of the Ankara office of the German Marshall Fund of the United States. The president, he added, was “increasingly less tolerant of dissent, particularly from within the party.”

Indeed, what exasperates many, in businesses large and small, is that Mr. Erdogan is not speaking off the cuff or dropping comments inadvertently. He and his insular team in the presidency, squired by his attentive communications director Fahrettin Altun, have been rolling out prepared speeches, which he delivers live on national television with the aid of a teleprompter.

In his first speech two weeks ago, he expounded at length on his decision to go against most Western economic practice and instead follow China in lowering interest rates and driving down the national currency to balance out Turkey’s current account deficit and make its products more attractive for export. He called on Turkish citizens to prepare for a “historic struggle” in what he cast as an “economic war of independence.”

He vowed that the country would no longer have to surrender to high interest rates, inflation and currency traps and he promised to improve production, employment and clear the current account deficit.

“Turkey may for the first time in its history have the opportunity to follow an economic policy in line with its own needs and realities,” he said.

The lira began a free fall within hours of his speech, losing 15 percent of its value in one day. Undeterred Mr. Erdogan gave another speech the next day and several more since, each time reaffirming his determination to lower interest rates in pursuit of growth.

He has reacted to the price increases not by adjusting his own approach but by lashing out at suppliers and warning them not to hoard goods and pressuring supermarkets to keep prices down. Social media was alive Thursday with talk of price increases for toilet paper and milk products.

“I am stunned by the increases,” said Mehmet Eraltay, who was selling bagels from a cart on the capital’s main square Wednesday. “It think the end of the world is coming.”

Analysts struggled to explain what has prompted Mr. Erdogan to insist on a monetary policy that goes against most widely accepted economic practice of controlling inflation by raising interest rates.

“The only thing that is going on now is the upcoming elections,” said Mr. Unluhisarcikli, of the German Marshall Fund of the United States. Mr. Erdogan is sliding in the polls, largely because of the economy, and is seeking to regain the momentum ahead of elections in 2023, he said. “He is looking for a way out.”

Most economists say the Chinese example would take a decade to take effect and could not bring economic relief within six to eight months as Mr. Erdogan is promising.

Mr. Erdogan is also constrained by his political ally, Devlet Bahceli, the right-wing leader of the Nationalist Movement Party, who frequently applies the brakes to proposals by Mr. Erdogan that would improve Turkey’s international standing.

Even limited efforts to restore democratic institutions and the independence of the judiciary could go some way to answer investors’ concerns, Mr. Unluhisarcikli said. It could also help Mr. Erdogan’s standing with voters, who are feeling increasingly anxious and ignored.

One of the few polling consultants who continues to advise both Mr. Erdogan and his opponents, Mehmet Ali Kulat, said he had to deliver uncomfortable news in their most recent meeting.

His most recent survey found that around 60 percent of respondents were very uncomfortable with the economic situation and 41 percent said they could not meet their essential needs.

There is widespread distrust of government institutions and even anger in reactions of respondents to some questions, Mr. Kulat said. “This is something beyond politics.”

Yet the president, who is known to closely follow opinion polls, dismissed the poor results and insisted he would still win, Mr. Kulat said. “Mr. Erdogan believes the data about the economy that we and other pollsters give is exaggerated,” he said.

The leader of an Islamist party, Temel Karamollaoglu, who met with Mr. Erdogan in November, also described the president as dismissive of his concerns.

“Mr. President believes that all developments in the economy and foreign policy are fail-safe,” he said in an interview published in an online news outlet, Gazete Duvar. “He doesn’t see any problem. I told him, ‘The information coming to you may be mistaken or different.’ He doesn’t share that idea.”

But Mr. Beki, the former adviser, said Mr. Erdogan would be focused on preventing the spread of bad news rather than questioning it.

“He believes he knows best,” he said. “I don’t think he listens to advice.”