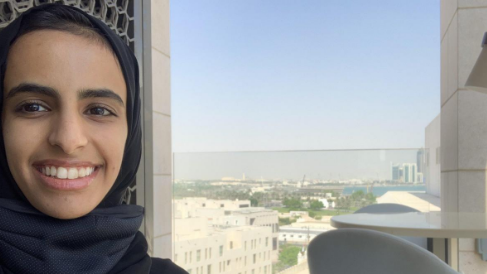 A Qatari women’s rights activist is allegedly being held in a psychiatric hospital against her will, a family member claims, raising fears over her safety.

Noof al-Maadeed, 23, fled to Britain in 2019 after years of domestic violence, documenting her escape from Qatar on social media. She returned on October 13, with her silence on social media raising fears the activist had either been detained or killed.

A relative of the activist confirmed to The Times that Maadeed was alive, but has been admitted to hospital in Qatar under a false name to keep her out of the public eye.

The young activist is allegedly under heavy medication and under guard at all times. “We have been speaking to someone inside the hospital for updates — the situation sounds horrific and we want to have her back safe immediately,” they said, asking to remain anonymous.

The relative said many in the family were “extremely worried” about Maadeed and believed she was in “imminent danger”.

“The government usually puts women that are abused or unwanted [by their family] there,” they added.

A source inside the hospital said a heavily sedated Maadeed, usually a vibrant young woman, was barely eating and speaking, staying in her room alone.

“This is more worrying than anything because we’ve seen women come out of there in a worse state than when they went in,” they said, also requesting their name not be published.

Maadeed made international headlines when she fled Qatar, using her father’s mobile phone to access a government app to process an exit permit, climbing out the window of her family home and making her way to the airport. She boarded a plane to Ukraine before arriving at her final destination, the UK, where she claimed political asylum.

She appeared on BBC Arabic to raise awareness not only of her case but the challenges facing women in Qatar. She said: “The government refuses to support women’s rights and stop violence . . . violence is everywhere.”

In one tweet, Maadeed said there had been three attempts on her life, leading her to report the incidents to the police. “Sheikh Tamim [ruler of Qatar] is the only one who can stop the danger to my life with his own hands,” she wrote.

The activist decided to return to her homeland and withdraw her application after she was reassured by the Qatari authorities she would be protected from any reprisals.

“The government reassured her that on her return to Qatar, she would be protected from the abuse from which she fled, but instead, she has simply disappeared. For people such as Noof, this is highly unusual. Her silence is extremely alarming,” said Khalid Ibrahim, executive director of the Gulf Centre For Human Rights, adding that her family is one of great power and influence.

“We have been monitoring this now for some time and are very worried for Noof’s safety. The government refuses to provide us with proof of life and what is clear is that while Noof may not be dead, it is highly likely that she is in a lengthy incommunicado detention,” he said.

The family member explained: “They’re the kind to just pretend someone is dead rather than actually kill her per se.”

They said that the issue has divided an already broken family. “Our family is not a family, it’s competitive and cutthroat so the groundwork for the abuse was there before Noof was born. The family dynamic is built on toxicity.”

They added: “Cousins are pitted against each other and are keeping tabs on each other. Game of Thrones is the closest way I can describe the family.”

A hashtag asking #whereisnoof went viral, with many of her friends and colleagues demanding answers and proof of life, but the calls fell on deaf ears and no such evidence has been put forward.

A Qatari official told The Times that Maadeed was safe and in good health, but said they were unable to speak publicly as it was a private family matter.

Her case is yet another blow to the country which has come under fire for its treatment of migrant workers in preparations for the World Cup next year, human rights abuses leading to a series of global calls for action against the Arab state.

Rothna Begum, senior women’s rights researcher at Human Rights Watch, said: “Holding anyone against their wishes — irrespective of where — without any legal basis would amount to arbitrary detention. We have repeatedly called on the Qatari authorities to ensure that Noof al-Maadeed is not in any form of detention; to allow her access to the outside world, including her phone; and to support her decisions to live an independent life, including her decisions relating to her security and care.”

Qatari women under the age of 25 cannot travel without a complex system of permissions and declarations to fly, or being accompanied by a male guardian. A married woman can travel abroad without her husband’s permission, but her husband can apply to a court to ban her travel.

Women must obtain permission from their male guardians, either a family member or husband, to exercise many of their basic rights such as permission to obtain a government scholarship to pursue higher education, work in government jobs and obtain reproductive healthcare.