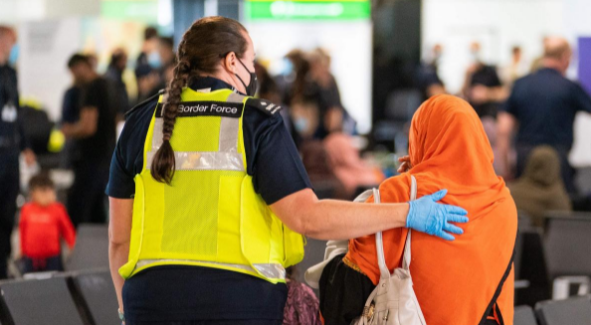 Priti Patel has been accused of “fixing the figures” and watering down a new scheme to resettle Afghan refugees as it emerged that thousands who are already in Britain will be included.

Home Office sources have blamed Rishi Sunak, the chancellor, for forcing the government to scale down its commitment to resettling the refugees owing to the “huge cost” of housing them.

The UK evacuated Afghan citizens in danger of Taliban reprisals because of their association with Britain’s 20-year campaign in Afghanistan — part of the emergency Afghan relocations and assistance policy (Arap).

The evacuation mission airlifted a total of 15,000 Afghans to the UK.

Ministers announced a separate Afghanistan Citizens Resettlement Scheme (ACRS) to offer refuge to those not protected by the Arap scheme. It is expected to be launched next month. However, Home Office sources said thousands evacuated under the Arap scheme and already in the UK would be transferred to the ACRS.

One insider involved in the plans said this was a clear breach of the government’s original commitment, saying: “This is not what was promised.”

Home Office insiders blame Sunak for the decision due to the huge cost of housing, education, health and integration support for the refugees. “Rishi is pushing us on cost,” one claimed.

A minister in a different department said: “The Treasury won the argument and that means there’ll be fewer refugees resettled. Much of the resettlement scheme will be soaking up the families of the Arap scheme. The refugee commitment was a standalone commitment but for financial reasons the Treasury has forced us to count people who are already here as much as possible towards that target to try to reduce the burden on housing and the taxpayer.” More than 12,000 Afghans who came under the Arap scheme are living in hotels because of a shortage of social housing.

The Home Office has promised to resettle 5,000 within the first year of the scheme, with a further 15,000 over the next five years. There are fears that a vast number of the 20,000 target will be taken up by Afghans already in the UK, leaving fewer spaces for people who are still in Afghanistan.

Yvette Cooper, the shadow home secretary, accused the government of attempting to “redefine” the resettlement scheme. She said: “The humanitarian crisis in Afghanistan is getting worse and the government must not now break the promises it made to help the brave men and women who stood up for our most fundamental values.

“If the government is now trying to redefine the schemes to get out of the commitments they made, that would be very wrong and risks more Afghan citizens being exploited by smuggler gangs in the absence of a safe and legal route.”

Alistair Carmichael, the Lib-Dem home affairs spokesman, said: “These revelations confirm what many of us have suspected, namely that much of the commitment to take people under the Afghan resettlement scheme will not help those who are still suffering from the Taliban’s rule.

“Yet again the Home Office has been found out for trying to renege on commitments and fixing the figures.”

The government said: “We helped over 15,000 people to safety from Afghanistan, and are proud to have provided homes for more than 4,000 evacuees. We will continue to work in partnership with local authorities and the private rented sector to secure permanent homes for Afghan families.

“The Arap scheme has provided over 7,000 people with security in the UK so far, while the Afghan Citizens Resettlement Scheme will open soon.”