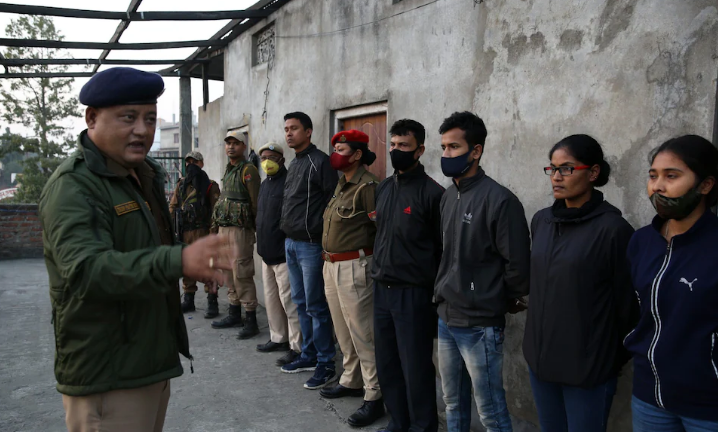 Tridip Kumbang leads his seven colleagues through the narrow streets of the village of Naramari in India’s north-eastern state of Assam.

On the deputy police superintendent’s sign, an armed patrol swoops into a home.

A 55-year-old suspect flees out of the back door, but runs straight into the waiting arms of two police officers from Mr Kumbang’s unit.

A tense 40-minute search reveals about 35g of powder hidden in a panel in the wall. The police believe it is either pure heroin or “brown sugar”, a locally manufactured low-quality imitation flooding an already saturated market.

“Drugs are in ample supply in the region and we are losing many of our young adults,” Mr Kumbang told The Telegraph on the raid.

The scene is increasingly common.

Chaos in neighbouring Myanmar has allowed narcotics gangs to thrive, while crushing poverty induced by the pandemic makes easy recruits out of young men up and down the border. Addicts are in every town and village.

The industry is estimated to generate more than £30 billion annually, according to the Crisis Group.

The country is also the world’s second largest producer of heroin after Afghanistan.

Thailand, part of the “Golden Triangle” of narcotics smuggling, saw a 73 per cent increase in seizures of methamphetamine from Myanmar in the first six months of 2021, compared to 2020.

And in Laos, the largest single drug seizure ever in Asia took place in October when 55 million methamphetamine tablets and 1.5 tonnes of crystal meth was seized on a truck travelling from Myanmar.

Back in Assam, there has been a 40 per cent growth in methamphetamine seizures this year compared to 2020, according to the police.

“Since February, there has been a huge uptick in the production of multiple types of drugs in Myanmar, in states like Shan and Wa, and that has led to an explosion of supplies in neighbouring countries,” says Avinash Paliwal, the deputy director of the SOAS South Asia Institute in London.

“Militant groups that are fighting the junta need access to liquid cash and this is the most lucrative business in Myanmar.”

Assam has long been a transit state for drugs, as well as for arms and human trafficking. To its east lies several Indian states, Nagaland, Manipur and Mizoram, that are home to myriad armed rebel groups, some demanding full secession from India.

These states share an extremely porous 1,020-mile border with Myanmar, which is descending into a full-blown civil war after the military coup in February. Many of the armed groups now operating in the country rely on the trade of illegal drugs to raise funds.

Traffickers are increasingly targeting the Indian market due to more stringent border checks on Myanmar’s border with China. The Indian army has also moved troops away from its border with Myanmar, opening up entry points for smugglers.

Satyaraj Hazarika, a deputy inspector general in the Assam Police, says methamphetamine refineries have sprung up a stone’s throw from the Indian border this year.

“It has become very difficult for law enforcement groups in India’s border states. The drug traffickers are able to pay for safe passage from 30 or so armed local insurgent groups so they are protected,” said a weary Mr Hazarika, comparing the growing threat posed to security by the drugs trade in Assam to that in Mexico or Colombia.

“Very soon, we will see this type of violence as the profits of gangs and insurgents increase and they try to gun each other down.”

The Covid-19 epidemic has caused record levels of unemployment in India’s northeast and many residents have been tempted by the quick cash drug smuggling offers.

Traffickers taking drugs to the major cities of Mumbai, Delhi and Kolkata are using increasingly sophisticated methods to avoid detection. A popular ruse involves filling the fuel chamber of a car with powder.

“Three months back, we received credible information that a known smuggler was planning to run some heroin through Assam,” said Pushpraj Singh, a superintendent in the Assam Police for the district of Karbi Anglong.

“When he arrived at the checkpoint, he had hidden the drugs under a seat where his wife and newborn baby were sitting, to create a distraction. I could not believe a parent would use their five- or six-day-old baby in this way.”

Mr Singh added that the abundance of illegal arms in the state meant that smugglers would often open fire on the police.

Alongside the rise in drug smuggling is a rise in drug use. In 2018, the United Nations Office on Drugs and Crime estimated that about 2.2 per cent of Assam’s 31 million citizens were narcotics users.

This figure has grown rapidly in 2021, according to Dr Sandeep Hansel, who heads the committee on Socio-Economic and Health Development Assam, a state-run organisation tasked with reducing drug use in the state.

“Earlier, drugs weren’t here in Assam. We would only see high-class users, the children from wealthy families who had gone to study or work in Mumbai or Bengaluru,” said Dr Hansel.

“But now, drugs are available everywhere, in every village. In one day, I could see 100 drug users and the majority will be from lower economic classes and tribal communities. I am very much worried about drug use in Assam, about the future of my state.”

There are only 140 rehabilitation centres in the state, of which at least 100 are private and costly, and the overall quality is poor. Approximately 40 per cent of heroin users relapse when they are released as they do not have access to a psychiatrist or continued check-ups once they return home.

Dr Hansel told The Telegraph that he had requested a further £10 million from the Indian government to build intensive rehabilitation centres in hotels and stadiums in Assam, but his request was declined. Instead, each centre is given just £20,000 of funding annually even though they can house anywhere between 20 and 120 people.

To stem the flow of drugs, police have resorted to increasingly heavy handed tactics, and have been accused of carrying out extrajudicial killings by activists, mirroring methods used in the Philippines.

In August, Himanta Biswa Sarma, the state’s new chief minister and a member of India’s authoritarian ruling Bharatiya Janata Party, encouraged police to shoot suspects in the legs and said that any action would be protected by the state’s courts.

India’s opposition parties attacked the ruling, arguing that Mr Sharma was trying to turn Assam into a “police state”, but staging fake encounters to kill known local criminals, such as cattle thieves.

According to official records, at least 28 people have been killed since May, but the actual figure is much higher, according to Arif Jwadder, a human rights activist in Assam. He said police killings occur “every other day”.

“In one case, a student was arrested in Delhi on drugs charges and taken back to Assam, accused of supplying drugs at a rave party,” said Mr Jwadder.

“He was taken out into the countryside by the Assam Police at 2am and shot in the leg. These are not organised criminals. They are small-time users. It has become a police state in Assam now.”

Mr Jwadder said that he filed a complaint to the Assam Human Rights Commission (AHRC) in July, but the organisation has failed to set up an inquiry as is mandated under Indian law.

“The AHRC is a toothless body staffed with allies of the government. And the victims are from poor or marginalised communities and don’t have the resources to fight against the mighty government,” said Mr Jwadder.

When The Telegraph contacted several families of alleged victims of extrajudicial killings, they refused to comment. One said that they feared reprisals from the state, while another had gone into hiding.

“The cartels bail out the drug lords at the drop of a hat and they are able to hire the best legal eagles,” contends Mr Hazarika.

“The threat from transnational organised criminals are asymmetrical and the principle of proportionality is a matter of academic debate.”