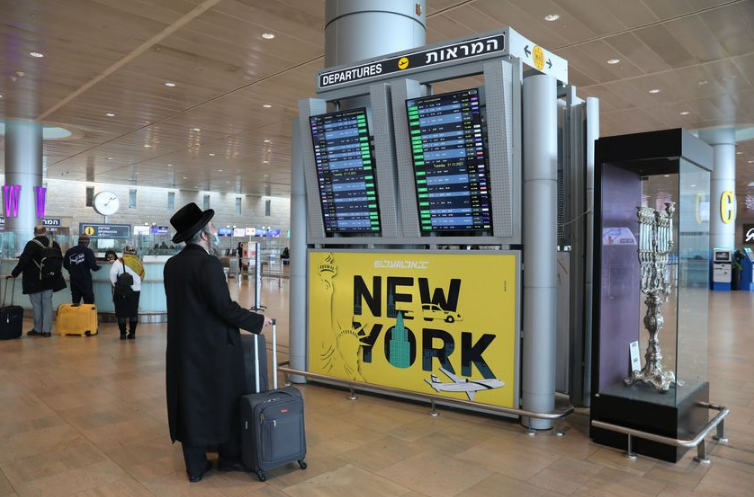 As the Omicron variant spreads quickly across the world, Israel has leaned more heavily than other countries on shutting down its borders to international travel, wagering it would slow down a coming wave of infections and buy time to prepare.

So far, Israel has closed its borders to foreigners and has also banned its residents from traveling to dozens of countries, including the U.S. and Canada, the U.K., much of Europe and most of Africa.

“Our sole aim is to delay this massive local transmission,” Prof. Ran Balicer, a senior adviser to the government on the pandemic, said Monday while explaining the travel restrictions to journalists in a briefing organized by the Europe Israel Press Association.

Israeli officials say they are betting that they can close their borders to international travel while keeping their local economy open, as they wait to determine the seriousness of the Omicron variant. Bars, restaurants, malls and other entertainment venues remain open. Meanwhile, officials say they are trying to boost vaccination rates in one of the world’s most inoculated countries in terms of shots per capita.

Even with the border restrictions, the health ministry forecasts that Omicron will likely surge through the country in the next two to four weeks.

The global response on travel has been mixed so far. U.S. health officials say vaccinated individuals should feel comfortable traveling during the holiday season as long as they wear masks. In Europe, the Netherlands on Sunday reimposed a lockdown, with all nonessential shops, bars and restaurants closed until mid-January. Denmark also placed new restrictions on public gatherings. Germany banned travelers to the U.K. on Monday because of growing concerns over the rapidly rising number of Omicron infections there.

The criteria Israel’s health ministry uses to put countries on the no-fly list is based on the percentage of travelers to Israel from a certain country that tests positive for the variant, or on how widespread the variant is in the country or its immediate neighbors.

Many governments around the world are waiting to learn how severely ill people infected with Omicron are likely to be before applying new restrictions. While it is known that Omicron is highly contagious, experts are still waiting for more data to understand whether it causes a milder illness than previous strains.

Israel, however, reckons the foreign travel restrictions will buy it more time to learn about the severity of illness caused by the variant, according to Prof. Balicer. Israel will be in a better position to “select judiciously the types of restrictions we impose within Israel on the economy,” he said.

Israeli officials say they know from earlier attempts to use travel restrictions during the pandemic that they can’t keep the new variants out for long. But they do think they are getting better at identifying the cases that do get through and are using contact tracing to break the chain of infection. The fewer cases there are, the more effective the contact tracing is.

Israel’s Heath Ministry on Tuesday said there are 1,148 confirmed or highly suspected cases of people with Omicron, the majority of whom had either recently returned from abroad or who came into contact with returnees.

This is evidence, Israeli officials say, that their travel restrictions have bought the country time. In other countries around the world, like the U.S., Omicron has already become the dominant variant.

But the strict travel restrictions have also drawn criticism in Israel, including from former health officials who helped lead the pandemic response, for being too severe a burden on the citizenry with little practical advantages.

“This thing is simply not effective,” said Prof. Itamar Grotto, former Deputy Director-General of the Ministry of Health, in an interview Tuesday on Army Radio.

Mr. Grotto, who petitioned Israel’s highest court against the travel restrictions, argued the idea of buying time to raise vaccination rates was impractical, given that it takes several weeks or more for the unvaccinated to complete the two-shot regiment. He also noted that not only have the unvaccinated not flocked to medical clinics in recent weeks, but that buying time before the next wave means those already inoculated would be impacted by waning protection.

Israel had one of the world’s quickest and widest vaccination campaigns at the start of the pandemic. Consequently, it also became the first country to carry out a wide-scale booster campaign, as its population suffered from waning protection first and was hit hard by the Delta variant.

But the success of those campaigns has been overshadowed by slow vaccine uptake in the country’s younger age brackets, especially children and teenagers.

Just under 60% of Israel’s 9.3 million citizens are considered fully protected from severe illness, meaning they have had three shots, or less than six months have passed since the second shot or their recovery from the virus.

That number has barely budged since Israel’s Prime Minister Naftali Bennett declared his country was in a state of emergency when Omicron was first discovered and he implored citizens to get vaccinated given the high stakes for the country.

While some countries have already been forced to put strict restrictions and even closures on their local economies, Israel is still largely unrestricted.

Local businesses are supposed to enforce indoor masking and entertainment, and sports venues are supposed to check for proof of vaccination or recovery before allowing entry. But public compliance, as well as government enforcement of these regulations, dwindled in the weeks before Omicron was discovered, and haven’t noticeably picked up since.

“To explain this new situation to our people and make them realize we are in a new emergency situation, I think this is the biggest challenge we have in the next few weeks,” said Prof. Salman Zarka, Israel’s top civilian government adviser on coronavirus, during Monday’s briefing with journalists.