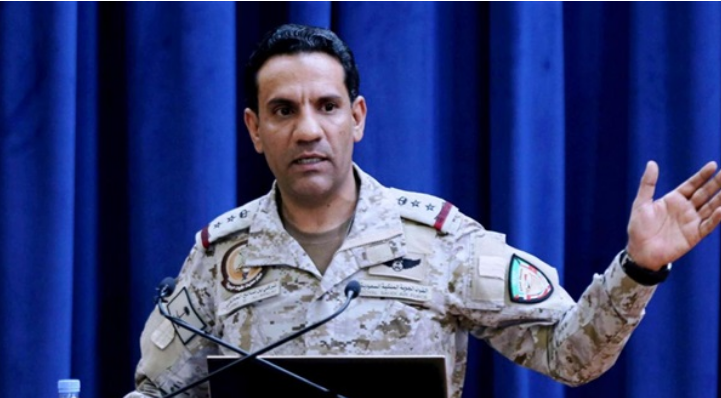 In a comprehensive briefing on the Yemeni crisis held in the Saudi capital, Riyadh, the Coalition to Support Legitimacy in Yemen presented evidence proving the involvement of the Lebanese Hezbollah in terrorist acts in Yemen, in addition to the use of Sanaa Airport to target the Kingdom of Saudi Arabia by converting the airport into a center for launching ballistic missiles and drones.

Accusations against Iran and Hezbollah

The coalition accused Iran and its Lebanese arm, Hezbollah, of sending experts and operatives to Sanaa Airport to help the Houthis launch ballistic missiles and drones towards the Kingdom from the airport, one of which killed two people.

Coalition spokesman Turki al-Maliki said that the Houthis use Sanaa Airport as a main point and center for launching ballistic missiles and drones towards the Kingdom, stressing that Hezbollah trains the Houthis to use booby-traps and drones at the airport.

Maliki showed two other clips of a Hezbollah member who blew up a plane at a base inside Sanaa Airport, and another of a leading Hezbollah figure speaking to Houthi fighters, saying, “We have to fill our ranks.”

Maliki stressed that it is the responsibility of the international community to stop these hostile acts of this terrorist organization, adding that immunity will be dropped from the places used by the militia to store weapons.

He revealed that the late Iranian ambassador to Sanaa, Hasan Irlu, was leading the planning of military operations in Marib, where battles are taking place between the Houthis and the Yemeni army.

At the same conference, the coalition announced that the Houthi militia had launched 430 ballistic missiles and 851 drones against Saudi Arabia since the war began in 2015, killing 59 Saudi civilians.

At the same level, Arab and Gulf countries, along with the United States and France, condemned the terrorist attack that targeted the Saudi region of Jazan, which resulted in the death of a Saudi citizen and a Yemeni resident, in addition to the injury of seven others due to the fall of a military projectile launched by the Houthis.

Egypt affirmed its solidarity with the Kingdom to confront these despicable terrorist attacks that represent a violation of the rules of international law and a blatant threat to security and stability in the region.

The UAE expressed its strong condemnation and denunciation of the attack, which it considered a dangerous escalation and a cowardly act that calls for taking all necessary measures to protect civilians and facilities from the threats of the Houthis, renewing its full solidarity with the Kingdom.

The Bahraini Ministry of Foreign Affairs affirmed its country’s solidarity with Saudi Arabia and its support for all measures Riyadh takes to preserve its security, stability and territorial integrity, calling on the international community to condemn these heinous terrorist attacks committed by the Houthi militia deliberately and systematically in flagrant violation of international humanitarian law.

Jordan condemned the Houthi targeting, and the official spokesman for the Jordanian Ministry of Foreign Affairs, Ambassador Haitham Abu Alfoul, stressed his country’s support for Saudi Arabia in the face of all that threatens its security and the security of its people.

The Arab Parliament also condemned the targeting of innocent civilians by the Houthis in the city of Jazan, stressing that this deliberate criminal act through which the terrorist militia is trying to target civilians and civilian facilities, comes in addition to the crimes of the Iranian-backed militia, which are considered war crimes that require trial, as they flagrantly violate all international laws.