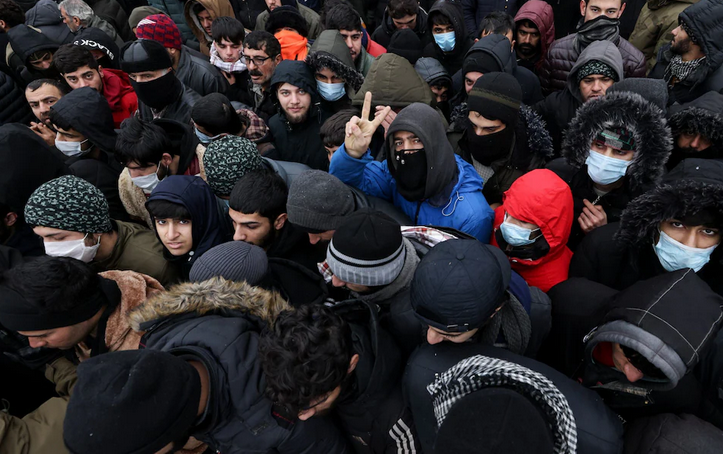 Brussels has watered down protections for asylum-seekers, allowing member states to detain migrants up to four months and made it easier for them to be deported amid the border crisis with Belarus.

In a major concession to the Eastern states, the European Commission agreed to water down protections for migrants arriving in the EU, including letting Poland, Lithuania and Latvia detain people for 16 weeks in processing centres on the frontier.

Belarusian dictator Alexander Lukashenko has been accused of sending tens of thousands of migrants to the border with Poland as part of a “hybrid war” with the West.

“We are giving flexibility and support to member states to manage this emergency situation, without compromising on human rights,” Ylva Johansson, European Commissioner responsible for home affairs, told a news conference on Wednesday.

But the temporary measures, which have initially been approved for six months, have drawn criticism from aid organisations and human rights groups.

The most significant change to the rules allows the countries to detain migrants in asylum processing centres on the border with Belarus for up to 16 weeks, rather than the current maximum of 12 weeks.

Under the bloc’s so-called border procedure, Poland, Latvia and Lithuania, which have the only land borders with Belarus, are allowed to enforce “simplified and quicker national procedures for the return of people”, making deportations significantly easier.

If migrants manage to break through the EU’s border fences from Belarus, Warsaw, Riga and Vilnius will be allowed to string their asylum applications out for four weeks, instead of the current three to 10 days member states have to complete the process.

Would-be asylum-seekers are encouraged to travel to Poland, Latvia and Lithuania through special entry points to allow for processing to begin immediately. Under the EU’s plan, the three states are obliged to supply migrants with shelter, food and healthcare as soon as they arrive.

In a warning shot to economic migrants, Margaritas Schinas, a Commission vice-president, told people unwilling to apply for asylum in the countries to “go home”.

“If a migrant doesn’t want to apply for asylum in one of those three countries, they must apply in Belarus. If he doesn’t apply in Belarus either, he should go home. Frankly that is how we see it,” he said.

According to the Commission, at least 18,000 migrants have managed to penetrate the bloc’s border from Belarus.

Ms Johansson said there is evidence that some have travelled to the port town of Calais in France, where migrants have been routinely departing in makeshift boats for Britain.

The measures will be seen as a significant offer to the three Eastern states, which have been on the front line of Mr Lukashenko’s bid to destabilise the EU by luring mainly Middle Eastern migrants to the bloc’s border.

However, they have been met by criticism from campaigners, who accuse the EU of pandering to the Belarusian leader’s “blackmail”.

Ludovic Voet, head of the European Trade Union Confederation, said: “Suspending Europe’s asylum protections would not only be morally wrong but also represent a total capitulation to the blackmail tactics being used by Belarus and its allies.

“The EU’s militaristic approach to the humanitarian crisis on its border has played into the hands of Lukashenko’s regime and rewriting fundamental rights under pressure would only serve to further encourage hostile actors to weaponise the lives of vulnerable people to exert pressure on Europe.”

Eve Geddie, Amnesty International’s Director of the European Office, added: “If the EU can allow a minority of member states to throw out the rule book due to the presence of a few thousand people at its border, it throws out any authority it has on human rights and the rule of law.”

While the situation on the frontier has calmed since mid-November, when Polish security forces clashed with migrants hurling rocks across the border defences, there are still nightly attempts by groups to break through barbed wire fences.

The Polish Border Guard said there were some 134 attempts to cross the Belarus border on Monday.