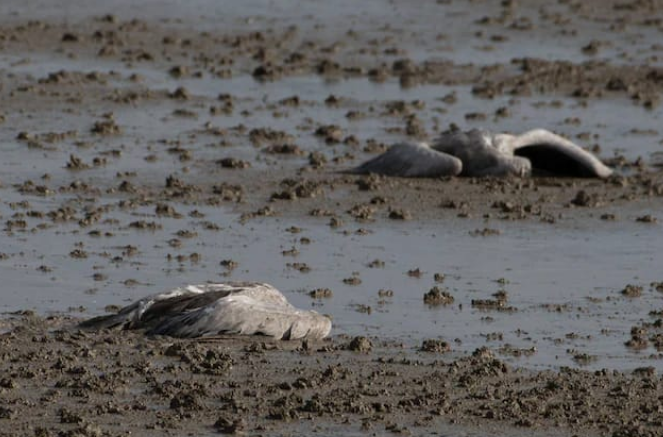 Israel is battling the coronavirus and a surge in flu cases. But it’s an outbreak of the H5N1 avian flu among migratory cranes and domestic poultry that is drawing global concern.

The bird flu, as its also called, is spreading fast in northern Israel, where at least 5,200 cranes have died of the disease and hundreds of thousands of chickens have been culled in an effort to contain its advance.

The avian flu is confined mostly to birds. It rarely jumps to humans, but when it does it can be lethal. As of October, the World Health Organization had confirmed 863 cases of H5N1 in people, 456 of whom died, around the world since 2003.

Israel has not recorded any infections in humans this year. Those who have possibly been exposed to the virus are receiving preventive antiviral treatments.

Israel is a central stop along the route of many species of birds migrating from Europe and Asia to Africa, a convergence that raises the risk of avian flu spreading from wild birds to captive poultry populations in the country.

Each year, about 500,000 cranes migrate through Israel, some 30,000 of which stayed to winter over there this year. The yearly stopover, often part of journeys lasting thousands of miles, draws the attention of bird enthusiasts, who travel to observe the large, long-legged and long-necked birds.

The H5N1 outbreak has wrought “the most serious damage to wildlife in the history of the country,” Environmental Protection Minister Tamar Zandberg said in a tweet Sunday.

She shared a photo of dead cranes peppering a lake in Israel’s Hula Nature Reserve, a hot spot for migratory birds.

“The extent of the damage is still unclear,” Zandberg said.

Israel reported its first cases of bird flu in 2006, and has seen outbreaks nearly every year since, according to the country’s Ministry of Agriculture and Rural Development.

The extent of this year’s train of transmission is not yet clear, but regulations require poultry and wild birds be kept separated to limit the chance of transference.

Word of Israel’s latest outbreak began to spread on Dec. 19, when the Agriculture Ministry reported that H5N1 had been detected in a farming community, Margaliot, near Israel’s northern border with Lebanon. The ministry said it had closed off the area and halted egg production.

Crowded and unregulated chicken coops are a “ticking bomb” for developing diseases, Agriculture Minister Oded Feror said in a statement at the time.

That same day, Israeli media reported that about 100 cranes had died in a bird flu outbreak in Hula Lake in a nature reserve in northern Israel. Authorities closed down the area to the public and days later temporarily shut the entire nature reserve.

Israel’s Nature and Parks Authority shared photos of workers in hazmat suits collecting the bodies of dead cranes from the water.

In the following days, outbreaks were detected in at least three other farms in the north as the Agriculture Ministry underwent mass testing.

The parks authority said Thursday that an estimated 1 in 5 cranes in Israel were likely to be infected with the virus, Israeli media reported. There have also been reports of deaths from the virus among other bird species.

Israel’s Agricultural Ministry has warned the public to buy only eggs with the required regulatory stamp and to consume thoroughly cooked eggs to prevent any further spread. The public has also been warned to keep a distance from wild birds.

On Tuesday, the ministry told chicken farmers in Margaliot to monitor cats that spend time around the coops, as felines can also become infected with the virus.

Israeli media outlets reported that the mass culling of chickens has created a shortage of between 15 million and 20 million eggs a month. About 200 million eggs are consumed monthly in Israel.