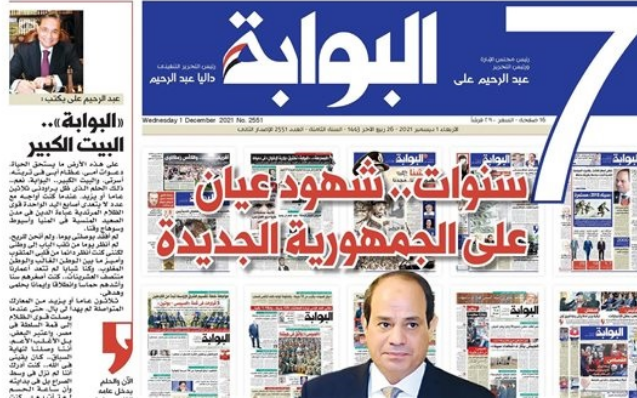 Al-Bawabah Investigations: Years of trouble searching for the truth

Al-Bawabah is entering its eighth year, and since the publication of the first issue in early December 2014, Al-Bawabas Investigations has fought major press battles, in which we exposed the heads of corruption and spoilers, and raised many issues and files of interest to the Egyptian reader, bearing and expressing his concerns and respecting him.

Dozens of journalistic investigations, which we have been proud to publish on our pages over the past seven years, have received wide responses from readers and officials, perhaps the most prominent of which is the fact that Al-Bawabah has reached the list of nominations for the Arab Journalism Award in the investigative category for an investigation entitled “Arab Unity Factories: Polluted air and endless fires”, which was published in December 2020, with the support of the Arab Reporters for Investigative Journalism (ARIJ).

The investigation revealed that there are hundreds of plastic factories and workshops for the manufacture of light shoes that operate without a license, although there is no official census of their number. These factories do not take into account the requirements of industrial security. They emit suffocating and harmful gases, and their smoke is inhaled by more than half a million citizens living in the Al-Wahda area in Shubra El-Kheima, where the results of measuring the air quality in the area showed that it exceeded the safe limits set by the environment law.

Al-Bawabah’s investigations also received a Certificate of Appreciation with the Press Excellence Award 2018 in the Press Campaigns category for a campaign entitled “Contaminated Blood at Nasser Institute” over five episodes. We revealed, with documents, the neglect and deterioration in a large medical edifice such as the Nasser Institute. We also investigated the corruption of dog sterilization vaccines, and revealed the method of importing and packaging, and the absence of oversight and the notorious companies from which they are imported.

Al-Bawabah did not forget the drug industry, as it published an investigation into the “cause of used machines” as the back door to the fake drug industry. There was also an investigation into the “Business of slaughtered donkeys in Egypt”, which revealed the interest of a global Chinese company in the skins of Egyptian donkeys, the fact that sexual stimulants are extracted from the skins, and the motives of some Chinese to work as brokers in the field of smuggling this type of skin to China.

Al-Bawabah published an investigation titled “Toxic Protein: Investigation reveals fraud in feed industry”, in which it revealed the secrets of factories producing adulterated feed protein from butcher remains, starting with those factories violating environmental requirements for their establishment, all the way to mycotoxins that are transmitted to humans and affect the liver, kidneys and neurons. There was also an investigation in partnership with the Thomson Reuters Foundation entitled “Gone Across the Border” documenting the Egyptian gold trade and smuggling.

Al-Bawabah Investigations was not far from dealing with many social issues in Egypt, including “Sham divorce: Secret door to stealing billions from the state”, which revealed through field research in the villages of Upper Egypt that 40% of separation cases occur only for the sake of obtaining the social security pension for the parents, as well as the involvement of some private companies and government departments in women receiving an undeserved pension due to salary items.

Under the title “Ankara thief continues to plunder Arab wealth”, we discussed Turkey’s dams on the Tigris and Euphrates rivers, its aggressive policy igniting a water war with the Arabs, and an investigation on the “New Leather City” that deals with the city’s problems after it was transferred from the El-Ayoun stream, which was contrary to the image published on development and the absence of crises.

There were also numerous investigations affecting patients and vulnerable groups and their concerns, including the suffering of expatriate cancer patients and the suffering of dwarves in Egypt. Al-Bawabah continued its investigations, publishing distinctive topics during the last year, such as “Violence against girls: Pandemic continues”, “The world is burning due to climate change”, “Private lessons: Looting parents’ money”, “Black, white and yellow: Three fungi cause terror in the world”, “Desalination plants: Egyptian boom in agriculture”, “Shabu (Methamphetamine): Addiction from first dose,” “Chaos of selling tombs on internet”, “Egypt’s markets do not know the mask”, “Adventure with the corona vaccine: Inside child care unit in Abbasiya”, “Street crimes: Horror films that break Egyptians’ hearts”, and “Between accusation of perversion and sexual weakness: Spinsterhood of men in Egypt”.

Al-Bawabah also published a number of other distinguished investigations, including “Specter of abortion chasing Egyptian women”, “Iron and steel: Mining furnace interference”, “False fame: Industry of fragile elite in world of trends”, “Business of Caesarean section: Fast way to get rich”, “ISIS with blue eyes: Cubs of organization are new terrorist projects,”, “Noodles: Quick meals of death”, “Old rent: Between rights of owner and stability of tenants”, “Normalization of relations with the tuk-tuk”, “Loss of life saving: Bank account thieves”, and “Killer mood of Abu al-Maamoul: Fake heroin, local industry”, as well as others.