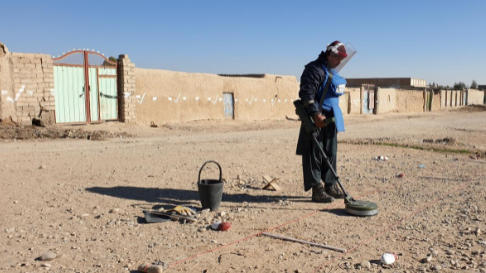 Just a few weeks ago, Mohammed Tahir, a father of two from Helmand province, was struggling to support his family with the income from working in a small village shop.

Now the 28-year-old Afghan is a trained de-miner, earning £230 a month to clear swathes of territory of explosives left behind during decades of war in Afghanistan.

He was given a job by the Halo Trust, a British charity that is the subject of an appeal by The Times and The Sunday Times to which readers have given £350,000 so far.

Speaking from the Nahri Saraj district, he said: “Our life was very hard before. My income was not good from my shop but now I have joined the Halo Trust it is much better and I can help with my parents and my brothers when they are in need. I would like to thank the British people for their humanitarian support for the Afghan people.”

The Halo Trust became well known in 1997 when Princess Diana walked through one of its minefields in Angola. It employs more than 2,500 Afghans of all ethnicities.

In June, masked gunmen from Islamic State shot dead ten mine-clearers working for the trust in Afghanistan’s northern province of Baghlan and wounded more than a dozen.

Callum Peebles, who oversees the charity’s work in central Asia, said that since the withdrawal of coalition forces from Afghanistan in August, hundreds of Afghans have applied to it for jobs. Halo employees are finding homemade explosives near homes and “laced” around schools. People welcome Halo workers into villages to clear the devices so that they can “get on with their daily lives”, Peebles said.

Mahmood, 23, another Halo employee from Nad Ali district, was a farmer. The father of three, who lives with his parents and cousins, said two of his cousins died in mine explosions.

He added: “I hope to continue with my job and put my children into school. I would like to thank the British people for their support.”