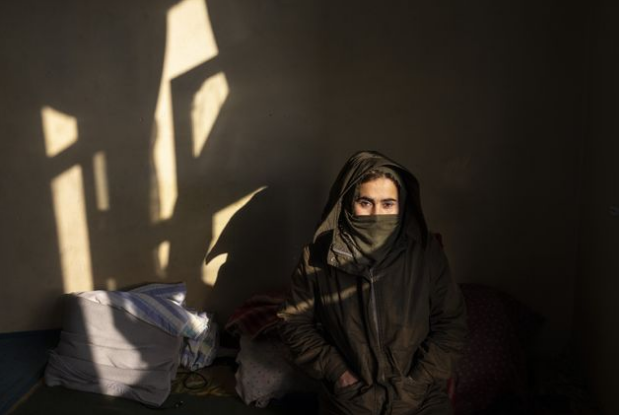 Afghanistan’s Former Female Troops, Once Hailed by the West, Fear for Their Lives

When the Taliban seized Kabul in August, Samima dug a hole in her courtyard and buried her Afghan Air Force uniform. The Taliban discovered her past anyway, and gave her a call days later.

In a panic, she switched off her phone, got rid of her SIM card and fled her house. She says Taliban gunmen have since showed up at her parents’ home, asking for people who served in the armed forces. She now is living in hiding, desperately hoping for a way out of Afghanistan.

“Thousands of girls like me are receiving threats, face an uncertain future and are being tracked by the Taliban,” said Samima, 26 years old, who currently lives with her husband in a one-room flat with no money for food or heating, and asked to have only her first name used. “The U.S. and the international community said they would support us no matter what. But they have forgotten us.”

Washington and its allies touted the creation of female Afghan police and military units as one of the flagship accomplishments of the West’s effort to empower women in Afghanistan. The U.S.-led coalition repeatedly publicized the achievements of female troops and police, despite the cultural sensitivities that pushed many of those women to keep their profession secret. Before the fall of the Afghan republic, there were around 6,300 women on the payroll of the armed forces and the police, around 2% of the total personnel.

Now, these women are among the most vulnerable groups left behind, with no clear pathway to leave the country despite the risk they face from both the Taliban and, often, their own families for violating the Afghan society’s conservative norms.

Only Afghan female police and soldiers who worked in special circumstances with the U.S. may qualify for a referral to a program to enter the U.S. as refugees. But that process is costly, as it requires applying from a third country, and could take years, according to U.S. officials.

“Many of these women don’t have years left. If they worked with the prior government or with U.S. forces, truthfully, there is a bounty on their head,” said a U.S. Air Force officer who knows Samima and who is involved in private efforts to resettle at-risk Afghans. “I have lost hope. I will keep trying but realistically I know they are not going to get out.”

The Taliban have promised a general amnesty to all soldiers and police after seizing power Aug. 15. However, many former service members have been assassinated since then, a figure that Human Rights Watch puts at over a hundred in just four of the country’s 37 provinces.

Among the victims are four female Air Force officers in the northern city of Mazar-e-Sharif, according to a person who used to oversee the female department of the Afghan Air Force. Two of them, sisters, were killed at home by unknown gunmen and two others were found dead after they met someone posing as a nongovernment organization worker offering to evacuate them, the person said.

The Taliban denied responsibility for these and other recent killings of former Afghan officials and security personnel.

“We hear that the employees of the former government are saying that they aren’t safe here. If the mujahedeen wanted to take revenge from these people, they could have done it when they first took over,” the Taliban government’s Prime Minister Mullah Hassan Akhund said in a recent speech. “But they didn’t. No one can prove harm being inflicted to even a single person during the entire period of the conquest. The forgiveness, mercy and compassion the mujahedeen have shown to the former government’s employees have no precedent in the history of mankind.”

In August, the U.S. and allies airlifted more than 100,000 Afghans, including tens of thousands of women at risk. Since then, opportunities for Afghans to escape the country have virtually ground to a halt. The U.S. only offers seats on limited evacuation flights to Americans, U.S. permanent residents and a small pool of visa applicants, most of whom worked directly for the U.S. and have cleared most vetting. Private rescue efforts have been on pause for weeks because no country is willing to take in Afghan refugees.

Select categories of aid workers, journalists and others may be referred to the U.S. Refugee Admissions program, but can only apply from a third country, an impossible requirement for most. Most female police and troops don’t qualify, according to U.S. officials, lawyers and official policy guidelines. Out of the Air Force’s 302 female officers, just six female pilots have made it out of Afghanistan, according to people with knowledge of their situation.

Former policewomen and female soldiers who remain in Afghanistan say they have become the target of a witch hunt. Most have abandoned their homes and live in hiding. Many have been rejected by their own families or outed by neighbors who are eager to fall in line with the Taliban. Without salaries or stable homes, they are struggling to feed themselves and stay warm.

Malika, a 28-year-old former staffer of the counternarcotics division of the Afghan police, said she began receiving threatening calls right after the republic fell in mid-August. The threats mostly came from her own husband’s Taliban relatives, she said. “One of my husband’s cousins told me: ‘I will kill you if I catch you,’ ” said Malika, who has since fled Kabul with her 4-month-old daughter, and is currently hiding in her sister’s house in a distant province. She asked for her first name only to be used.

“I’ve been here for a month and I don’t go out. I am scared the Taliban will recognize me,” said Malika, whose husband, also a police officer, has fled overland to Iran.

In Afghanistan’s deeply conservative society, enlisting women in the police and armed forces was always a huge cultural challenge and was met with widespread resistance. Despite incentives that included cash bonuses and paid accommodations, the Afghan government struggled to meet the female recruitment targets set by the U.S.-led coalition.

“I saw firsthand how we brought women into the armed forces, how we trained them, and how they supported the NATO and U.S. mission in Afghanistan,” said Wazhma Frogh, a women’s-rights activist who assisted the Afghan ministries of defense and interior in their recruitment effort. “NATO abandoned these women. They have a huge responsibility. The women who have been killed and whose lives are at risk, NATO, sadly, has their blood on their hands.”

The North Atlantic Treaty Organization declined to comment on female troops and police left behind.

Ms. Frogh said one of the biggest threats these women face today comes from society at large: “There is so much anger from the community toward them. People do not hesitate to tell Taliban fighters where a [female] army official lives in their community.”

The State Department said an undisclosed number of Afghan policewomen who worked closely with its bureau of law enforcement have been referred to enter the U.S. as refugees. A State Department spokesman declined to comment specifically on the situation facing other former female police and soldiers but said that Washington will keep working on helping Afghans who had supported the U.S. effort. “Our commitment to our Afghan allies still in Afghanistan did not end when we left the country,” he said.

Private U.S. citizens and rescue groups have female police and soldiers on their lists of people to help. But they say evacuation efforts can’t move forward without the State Department’s support because foreign governments are requesting a no-objection letter from Washington to grant these Afghans transit or temporary entry.

“They are indirectly preventing us from continuing rescue efforts. Without a place to put the evacuees, we can’t get them out,” said Jesse Jensen, a co-founder of Task Force Argo, a rescue group that seeks to fly out 566 Afghan women at risk, including former police officers and soldiers. “We tried multiple deals with countries and each time it came down to U.S. government approval.”

Task Force Argo was one of the volunteer organizations that sprang up to help evacuate Afghan allies after Afghanistan fell to the Taliban this past summer. It relies on private donations and the free time volunteered by veterans, current and former government officials and others.

The State Department said tens of thousands of Afghan women were evacuated from Kabul airport in the summer, and it was no longer its responsibility to assist with evacuations to third countries. “Letters of no objection were issued in limited circumstances during the evacuation and immediate aftermath where some planes landed in third countries,” a spokesman said.

Many former Afghan policewomen and female soldiers face an additional obstacle: a lack of documentation. The photo page of Samima’s passport, for instance, was torn up by the Taliban when she attempted to reach the airport to try to board an evacuation flight in August. She has retained all the fragments.

Others don’t have a valid passport at all. They include Soheila, a 45-year-old former senior police officer who until mid-August was responsible for overseeing cases of gender-based violence in two of Kabul’s police districts. She also asked for her first name only to be used.

Most of the men she helped put behind bars—many of them abusive husbands—were freed by the Taliban when they seized power and emptied prisons. Soheila is more scared of them than she is of the Taliban.

“I’ve been receiving threatening messages from people who were in jail and now released and it puts me and my family life at risk,” said Soheila, whose house in Kabul was ransacked days after she fled it in August. She is now hiding with relatives in a cramped house on the outskirts of the Afghan capital.

“I can’t sleep at night,” she said. “I haven’t received a salary in months. There is no money. Our life is under threat. How can we live here?”