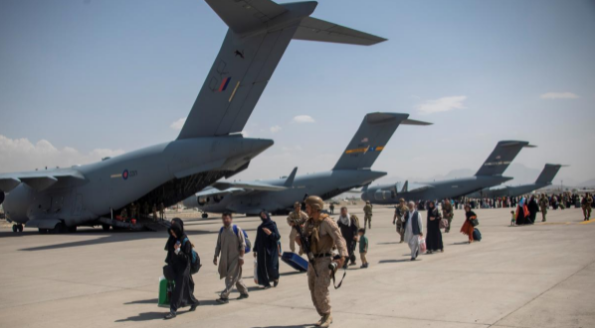 Britain’s withdrawal from Afghanistan risks creating a new generation of terrorist insurgents and fostering extremist sentiments against the West, Gordon Brown has said.

The former Labour prime minister described the situation in Afghanistan as harrowing and said that the West was “sleepwalking into the world’s biggest humanitarian crisis of our times”.

In an article for Times Red Box, Brown said he feared that abandoning the world’s poorest people would feed “anti-western resentments that may come back to haunt us”.

Martin Griffiths, the UN under-secretary-general for humanitarian affairs, said in a speech last week that by the middle of next year 97 per cent of the Afghan population could be deemed too poor to fend for themselves. He said that 23 million people were already facing hunger.

British and American troops withdrew in August and since forming a government the Taliban have closed the women’s affairs ministry and require women to travel with a male relative.

Brown, the UN special envoy for global education, wrote: “By standing aside, we have not just taken leave of the country. Historians will look back and ask whether we have taken leave of our collective senses, doing far too little to ease human suffering.”

He said that thousands of Afghans faced a choice between starvation and emigration this winter, something that would trigger a “mass exodus” to neighbouring countries and to Europe.

The UN estimates that the Afghan economy will contract by up to 30 per cent over the next year and that annual income per head could fall by nearly half to £260, or less than 75p a day.

Brown said that Afghanistan needed the largest humanitarian response ever agreed for a single nation and called for government backing for a $4.5 billion package drawn up by the UN.

“As recently as October, at a G20 meeting, leaders agreed to take action to address the humanitarian crisis, but since then not enough of the promised aid has materialised even through informal and UN channels,” he wrote.

“It took until last week for the United Nations security council to agree a resolution that would exempt humanitarian activities from the UN sanctions regime imposed on Taliban members.

“It cost America trillions to fight the war in Afghanistan. It is not beyond our capacity to find $4 billion to prevent starvation amid this uneasy peace. This tragedy foretold cannot be a tragedy unresolved.”

After its withdrawal Britain pledged to welcome 5,000 Afghan refugees in the first year and up to 20,000 in future, including women and those who are at risk of persecution. Four months after evacuating 15,000 people, only about 3,000 have been moved into permanent homes in Britain.

The government has struggled to persuade councils to come forward voluntarily, while other local authorities are at full capacity after housing asylum seekers.

The Times reported last week that Sajid Javid, the health secretary, has urged ministerial colleagues to impose mandatory allocations of Afghan refugees on all 300 local authorities — depending on their size and capacity — rather than relying on a voluntary system. The proposal was blocked by Priti Patel, the home secretary, leaving more than 12,000 still living in hotels.