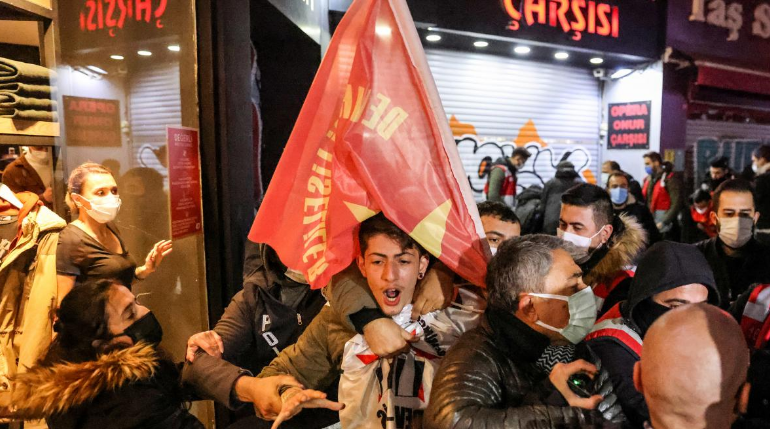 Five years ago, Murat would have laughed at the suggestion that he could ever turn his back on the man he credited with saving Turkey: President Recep Tayyip Erdogan. Like most of the inhabitants in his Black Sea town, Murat was devoted to the president who, like him, came from conservative roots and humble beginnings. When he moved to Istanbul with his family 15 years ago, Murat would go to Erdogan’s rallies, cheering and decrying those enemies in the West and elsewhere who dared to insult him.

Three years ago a currency crisis made the price of food and other goods soar, forcing Murat and his family — once solidly middle class — to cut down on meat and other luxuries. Each month they would have to beg the municipality not to cut off their electricity. Prices doubled, then in some cases tripled, as the costs of imports rose while the currency fell.

As Murat saw it, the president had begun distancing himself from the people, hiding out in his 27,000 sq ft palace in Ankara. When he did come out, he seemed to look down on ordinary Turks.

“I used to vote for him,” Murat said earlier this year, as he stood outside his house in a conservative part of Istanbul. “But all I’m seeing now is the rich getting richer and the poor getting poorer.”

This week, the Turkish lira went into a tailspin, dropping 18 per cent against the dollar in one day. Ordinary Turks such as Murat were facing another day tightening their belts, struggling to pay rent and facing a future that looks volatile and uncertain — a harsh contrast to the prosperity once promised by Erdogan. On Wednesday riot police broke up a protest in Istanbul, one of several nationwide.

For more than 20 years Erdogan, 67, has dominated politics, first as mayor of Istanbul, then prime minister and, since 2014, president. During that time, Turkey was transformed. Its infrastructure has been modernised: rural tracks have become dual carriageways and it seems like there is an airport in every other village. Hospitals are often world class.

Now repression and authoritarianism, and falling living standards, have taken the gloss off for some of his supporters. In 2019 the AKP lost control of Istanbul and other major cities in local elections.

Erdogan’s approval ratings, once above 50 per cent, have fallen to the mid-thirties. His chances in the 2023 elections are looking shaky. Even his rants against external enemies are starting to fall flat.

Some AKP supporters are turning on the man they once regarded as a pugnacious upstart who could get anything done — but who they now consider out of touch. “In the old days when he made a promise, he delivered, when there was a problem he’d fix it,” said Murat. “Now he only talks and he doesn’t fix anything.”

Economists say his policies have made matters worse: this year the lira has fallen 40 per cent against the dollar after Erdogan pushed the central bank to cut interest rates, claiming it would create investment, exports and jobs. Critics labelled it an “experiment” that will fuel inflation and send the currency further into crisis.

“If you choose to keep the interest rate low, the Turkish lira is going to lose value,” said Selva Demiralp, professor of economics at Koc University in Istanbul.

The main opposition leader, Kemal Kilicdaroglu, last week said that the country was experiencing a “catastrophe”. Erdogan, however, was quick to blame external enemies for the country’s issues. “We see the games those who seek to push our country out of the equation play over exchange rates, interest rates and price hikes as they used to do in the past, and we display our will to move forward with our own game plans,” he said.

Turks are struggling to make sense of this new, volatile reality. Middle-class professionals who once took holidays abroad are stockpiling medicine. Fears are rising that producers will hoard goods until prices stabilise.

At a supermarket in Istanbul this week, shoppers were restricted to two jars of Nutella each. In some areas of the country there were long lines outside petrol stations. “We just don’t know what will happen next,” said one Istanbul professional in her mid-thirties.

Yet Erdogan’s biggest challenge at the next elections, pollsters say, will lie in convincing the nation’s conservative youth that he is the best leader for them.

Four years ago, Ayse, 23, in her second year of university, took off her headscarf and disavowed the AKP. Two years before she had left her ultra-conservative family in a small Black Sea town for Istanbul. Back home, the only source of information was state TV. The family lived in constant suspicion of external enemies trying to destroy Turkey.

“Those who were not from the AKP were like enemies in the household,” she said. Once, she could have been counted on to vote AKP. Yet she believes she has no future under Erdogan.

For now, there is no real alternative. Many of the president’s former supporters are loath to throw their weight behind the main opposition party, the CHP, founded by Ataturk, who they see as secular former overlords who discriminate against religious people. Selahattin Demirtas, leader of the pro-Kurdish HDP party — once known as the Kurdish Obama — is in prison on what rights groups say are blatantly political charges.

“Many disgruntled AKP voters do not necessarily dislike Erdogan, but they do not like how the ruling party is run in this extremely personal way,” said Berk Esen, assistant professor of political science at Sabanci University in Istanbul. “Many competent people have been purged, and the party no longer really has the same organisational capacity that it did.”

Rumours are swirling that elections will be brought forward, though for now his approval ratings are believed to be so low that it would not be in his interests.