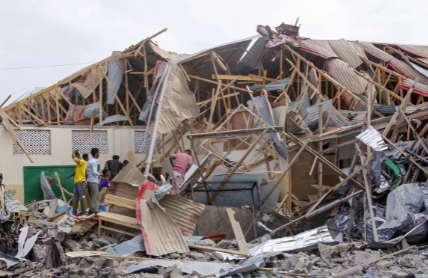 Pupils and teachers were among at least eight people killed in a rush-hour suicide car bomb attack near a school in Mogadishu, Somalia’s capital.

The extremist group al-Shabaab, which is linked to al-Qaeda, admitted carrying out the bombing which they claimed had targeted a United Nations military convoy escorting “white officers” from a nearby training base.

Witnesses said that vehicles carrying troops from the African Union (AU) regional forces who have been fighting the militants were in the area of the blast at 7.30am, and also reported hearing gunfire.

“I was close to the area when the blast occurred, there was an Amisom (African Union Mission in Somalia) convoy . . . passing by,” Said Ibrahim told AFP. There has been no confirmation about military deaths or injuries.

A vast column of smoke hovered above emergency teams as they picked through the collapsed roof and and jumble of classroom furniture at the Mucassar primary and secondary school in the Hodan district of the city.

Mohamed Hussein, a nurse at the nearby Osman Hospital, said health workers were also “shaken by the blast pressure, then deafened by the gunfire that followed”.

Abdulkadir Adan, from the city’s ambulance service, shared pictures of the rubble and confirmed five deaths and said at least 15 wounded were receiving treatment. Local media reported at least eight deaths, with students and teachers among the dead and injured.

Al-Shabaab, considered by many analysts to be the world’s wealthiest and most dangerous al-Qaeda affiliate, has been waging a violent insurgency against Somalia’s fragile government since 2007.

Sheikh Abdiasis Abu Musab, the group’s military operations spokesman, told Reuters that the explosion was aimed at a UN convoy.

The AU’s peacekeeping force was meant to withdraw from the country but its mission is likely to be extended over concerns that Somali forces are not ready to assume responsibility for security.

The US has scaled down its presence in the country to barely 100 personnel in support and intelligence roles.

Al-Shabaab is as busy and ruthless as ever. A prominent Somali journalist was killed on Saturday in an attack which the group admitted carrying out. Abdiaziz Mohamud Guled, the director of the government-owned Radio Mogadishu, had been a fierce critic of al-Shabaab.

Two attacks in September together killed 17 people. A car bombing on September 25 near the presidential palace killed eight people, including the prime minister’s adviser for women and human rights, Hibaq Abukar.

Eleven days earlier, nine people, most of them members of Somalia’s security forces, were killed in a blast near a Mogadishu checkpoint.

Al-Shabaab controlled the capital until 2011 when it was pushed out by Amisom troops but it still holds territory in the countryside and launches frequent attacks against government and civilian targets in Mogadishu and elsewhere.