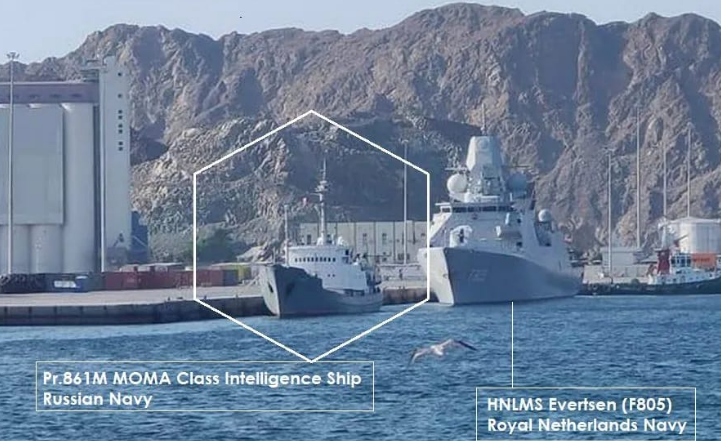 A Russian spy ship has been pictured tracking the Royal Navy’s aircraft carrier off the coast of Oman in a rare sighting.

The vessel was seen in Muscat berthed alongside a Dutch frigate that has accompanied HMS Queen Elizabeth and other escort ships on the inaugural deployment of Britain’s new Carrier Strike Group.

Thought to be the Kildin, a Russian Moma-class spy ship, the vessel is believed by Nato officials to have an electronic eavesdropping role.

The Kildin is likely to have been attempting to intercept radio communications from Britain’s new aircraft carrier as she travelled to and from the Indo-Pacific region on her maiden voyage.

The Russian vessel, normally part of the Black Sea fleet, was seen on October 8 transiting the Bosphorus – the Strait of Istanbul – prior to entering the Mediterranean Sea en route to the Gulf.

Experts believe she is part of the Black Sea Fleet’s 519th Independent Intelligence Ship Division, built in Gdansk in 1950.

H I Sutton, a naval specialist, said that, although old, “these small ships pack a powerful intelligence-gathering punch”.

Kildin measures just over 70m in length and has a crew of 73. Lightly armed with only 16 missiles for shooting down aircraft, she carries a number of radars and underwater communications systems to listen in on other ships.

The Sultan Qaboos port in Muscat, Oman, is used by international warships from many nations, including Nato and Russia. It is not unusual to find differently flagged vessels there, Mr Sutton said.

Russian ships suspected of spying regularly pay close attention to Royal Navy exercises and operational deployments but are not usually spotted so close to western vessels.

For the Kildin to be seen “tagging along” with the Carrier Strike Group is not surprising, Mr Sutton said, “but unusually, evidence has surfaced on social media”.

Images of the Royal Netherlands Navy warship HNLMS Evertsen appeared shortly after she arrived in the Omani port on November 1. Experts quickly spotted the Russian spy ship berthed alongside.

The hydrographic survey vessel Kildin was laid down at the Stocznia Polnocna Shipyard, Gdansk, Poland and launched on December 31, 1969. She was commissioned in 1970 and converted to an intelligence ship the same year.

Of the 28 similar ships in her class, only eight others were turned into spy ships.

One sank in 2017 after a collision in the Black Sea with a Togo-flagged freighter. All the crew survived.

It is not the first time the Carrier Strike Group deployment has been the subject of close Russian interest.

In June, Moscow said a patrol ship had fired warning shots at HMS Defender, a Type-45 destroyer, as she transited the Black Sea near Crimea – annexed by Russia in 2014. The MoD rejected the claims and insisted the British ship had been in international waters at the time of the incident.

Britain maintains Russia’s annexation of Crimea is in breach of international law.

HMS Queen Elizabeth is currently docked at Duqm port, around 400km further south in Oman, from where she has been supporting land, sea and air exercises with the Omani Forces, including missions flown by British and American crews in F-35 stealth fighters.

Speaking on a visit to the region, Defence Secretary Ben Wallace said: “HMS Queen Elizabeth is here to demonstrate our commitment to the Omanis as invaluable partners and to show our support to the wider Gulf region.”