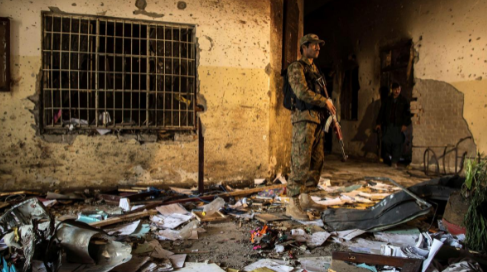 Pakistan’s government has signed a month-long ceasefire agreement with the country’s version of the Taliban, bringing a potential end to more than a decade of conflict.

The tentative truce with the Tehrik-i-Taliban Pakistan (TTP), also known as the Pakistani Taliban, was announced yesterday after talks mediated by the new Taliban government in Afghanistan.

Relatives of those who died during the group’s brutal campaign of violence said they could not support negotiations by Imran Khan’s government with “murderers and terrorists” — or questioned why a ceasefire could not have come sooner.

Formed in 2007, the TTP have been responsible for thousands of deaths but became best known, in the West, for a gun attack on Malala Yousafzai, who recovered from bullet wounds and later won the Nobel peace prize for her activism in favour of female education.

The Pakistani Taliban were also responsible for the 2014 massacre at a military-operated school in Peshawar, which resulted in the deaths of 141 people, including 132 schoolchildren.

That tragedy provoked a military campaign against the group by Pakistan’s armed forces, which significantly reduced their capacity to carry out attacks.

A spokesman for the TTP, Mohammad Khurasani, confirmed that the ceasefire would begin today and last until December 9. Fawad Chaudhry, Pakistan’s information minister, had earlier confirmed the agreement and said it could be “extendable”, subject to continuing negotiations.

Pakistan’s government hopes that the agreement could end the militant group’s campaign of violence which has lasted nearly 15 years.

Families of victims and opposition politicians denounced the move today. “We are not in favour of negotiating with these murderers and terrorists and we would not accept any kind of deal with them,” Ajun Khan, whose 15-year-old son, Asfand, was killed in the school attack, told The Times. “We are protesting against the government move and it’s our right to pursue our cases in the courts.

In a reference to the mediated talks, he said: “This is the Taliban’s government [in Afghanistan] and their B team [in Pakistan] and we are not trusting them”.

Dost Muhammad, whose son Asad Aziz also died in Peshawar, added: “We are not taken on board by this government regarding talks with the killers of our children. They have no right to decide alone and talk with the TTP — at least morally they should have informed us before making any decision.

“They are the political elite and [prime minister] Imran Khan’s own children are living luxurious lives in London. He is unable to feel our pain and sorrow. If the negotiations are the solution then why did they not negotiate before? At least our children and many other civilians and military officials’ lives would have been saved”.

Tufail Khan, father of Sher Shah, 15, who was killed in the 2014 massacre, took a different view, saying: “If we attain peace through negotiation and these kinds of brutal attacks could be stopped in future then we support this process with brave hearts. Our loss is irreparable and our children were innocent and we are still suffering from the tragedy and trauma. To save other children from such attacks if the negotiations bring peace then we will support this, though we will not forgive the killers”.

There have been multiple peace agreements between the Pakistani state and the militant group, all previously short-lived, with both sides soon accusing each other of reneging on the terms of the deal. Although all past deals were led by the military, with civilian governments mostly acting as wary bystanders, this time the talks have been championed by Pakistan’s cricketer star turned politician Khan.

Even in opposition Khan, 69, was a huge supporter of talks with militant groups. He had repeatedly advised Washington to negotiate with the Afghan Taliban, who are distinct from the TTP despite sharing a militant Salafist Islamic ideology.

Khan was also a vocal critic of US-led drone strikes against both the Afghan and Pakistani groups, and had claimed that he would negotiate with the TTP when he got into power.

The minister Chaudhry stressed that the talks with the TTP, which have taken place at an undisclosed location in Afghanistan, were being held “strictly in line with the constitution and the law of Pakistan”.

However, Afghan and Pakistani sources say that the TTP is demanding a blanket amnesty and release of all its fighters in Pakistani custody in exchange for extending the peace deal.

Civil society activists also criticised the apparent capitulation of the Pakistani state, which has recently signed a deal with a hardline Islamist party, Tehreek e Labbaik Pakistan, which threatened to lay siege to the capital, Islamabad.

Opposition politicians believe the success of the Afghan Taliban in taking power in Kabul has emboldened the TTP, which had been severely degraded by multiple military operations against the group by Pakistani armed forces, as well as defection by TTP fighters to local chapters of Islamic State.