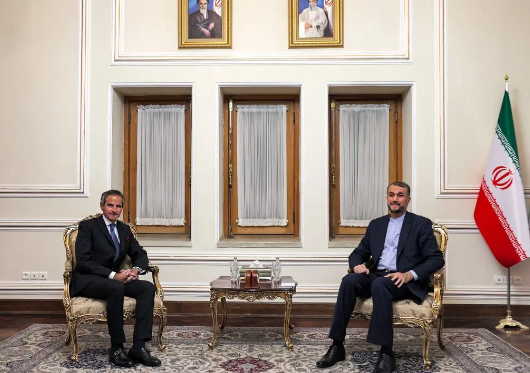 In what could be an ill omen for the resumption of talks next week on reviving the 2015 Iran nuclear deal, the head of the International Atomic Energy Agency said on Wednesday that he had failed to convince Iran to replace key equipment needed to monitor its nuclear program.

The agency is charged by the United Nations with monitoring nuclear activity among member states. Its inspectors and cameras have been the prime source of information about Iran’s atomic program, which many in the West believe is coming ever closer to having the know-how and material to fashion a nuclear weapon, despite Iran’s repeated insistence of peaceful intent.

The agency’s director-general, Rafael M. Grossi, told a quarterly meeting of its board of governors in Geneva that two days of talks in Tehran had not produced an agreement to reinstall surveillance cameras at a centrifuge-parts workshop in Karaj, Iran. The workshop was the target of apparent sabotage in June, an attack that Iran blames on Israel.

After what he called intense negotiations, Mr. Grossi told reporters: “We could not agree yesterday, in spite of my best efforts.’’ He vowed to continue trying, saying, “We must reach an agreement.’’

The Karaj factory is once again producing parts for centrifuges, which enrich uranium, but without monitoring by the agency. In September, Iran had reached an agreement with Mr. Grossi to allow agency inspectors access to monitoring devices, including cameras with full memory cards and automated measuring devices under seal, in various nuclear facilities. But Iran has since denied inspectors access to change the memory cards and retrieve the data.

Mr. Grossi said talks with Iran would continue, but that time was running out.

“We are close to the point where I would not be able to guarantee continuity of knowledge” of activities at the workshop, he said, adding that the information is “widely recognized as essential in relation to a return’’ to the 2015 nuclear deal that put tough limits on Iran’s nuclear enrichment and other activities.

According to The Wall Street Journal, Iran refused to offer the agency access to Karaj unless it dropped parts of a long-running inquiry into the discovery of undeclared nuclear material in Iran, raising concerns that Tehran is hiding past or current nuclear military activities.

President Biden is in negotiations to bring the United States back into the 2015 deal, which former President Donald J. Trump renounced more than three years ago. But since the last round of those negotiations ended in June, Iran elected a more conservative president, Ebrahim Raisi. He has expressed deep skepticism about the value of the negotiations unless the United States immediately lifts all punitive sanctions against Iran and commits to never leaving the deal again. Both those conditions are impossible to meet, senior American officials say.

On Monday, for the first time since Mr. Raisi took office this summer, Iranian negotiators plan to meet with their European, Chinese and Russian counterparts in Vienna to resume talks on the deal. But the Europeans, and American negotiators following the talks, are far more pessimistic than when they left Vienna five months ago. Today, the nuclear deal looks dead, and President Biden’s vision of re-entering the agreement in his first year, then building something “longer and stronger,” appears all but gone.

Iran breached the terms of the 2015 deal in response to what it said was the United States’ reimposition of punitive sanctions under Mr. Trump and European countries’ failure to fulfill economic promises they had made to Iran as part of the agreement.

American officials estimate that Iran could now have enough highly enriched uranium for one bomb within about two months, although its ability to create a weapon — a goal Iran has always denied — would be perhaps two years away.

In Tehran, Mr. Grossi met Mohammad Eslami, the head of the Atomic Energy Organization of Iran, and Iran’s foreign minister, Hossain Amirabdollahian, who said that Tehran wanted “constructive engagement” with the agency.