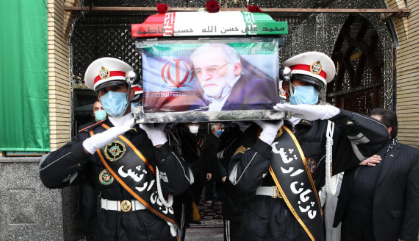 A former Iranian nuclear chief has made the clearest admission to date that the country’s atomic programme was geared towards creating a bomb, despite years of official denials.

Iran has always insisted that its nuclear programme was intended for peaceful purposes and that Ayatollah Ali Khamenei, the supreme leader, had issued a fatwa against the development and use of nuclear weapons.

However, in an interview with state media, a former head of the Iranian Atomic Energy Organisation has admitted the existence of a “system” with military capabilities.

The interview with Fereydoun Abbasi-Davani marked the anniversary of the assassination last year by the Israel spy agency Mossad of a senior Iranian scientist, Mohsen Fakhrizadeh, who was also a deputy defence minister.

Fakhrizadeh was accused by Israel of being the mastermind of the nuclear weapons programme. It argued that he oversaw an array of scientific research activities and uranium enrichment facilities, which individually could be said to have civilian uses but together with a separate missile programme created the infrastructure necessary for nuclear weapons.

Abbasi-Davani came close to admitting that this description of Fakhrizadeh’s importance in the Iranian nuclear “system” was correct, and that this explained Israel’s decision to assassinate him.

Publication of the interview coincides with the resumption today of talks in Vienna on Iran’s nuclear programme, the first direct negotiations on the issue since the election of a new hardline president in Iran, Ebrahim Raisi.

The talks are supposed to lead to the re-implementation of the deal signed by Iran, the West and the UN security council in 2015 to limit the nuclear programme in return for the lifting of economic sanctions. President Trump tore up that deal in 2018 but President Biden came to power promising to reinstate it.

Doing so has been delayed, however, by US demands that Iran promise to allow further negotiations on its broader Middle East policy, including its use of proxy militias such as Hezbollah in Lebanon, and on its missile programme. Iran has refused, and President Raisi has countered with extra demands of his own, including for financial compensation for Trump’s decision to break the deal.

The talks, hosted by the International Atomic Energy Agency, will involve Iran’s negotiating team meeting those of Britain, France, Germany, Russia and China. Tehran refuses to meet the Americans directly, so the US team sits in a separate room and is briefed by European and other counterparts.

Iran began enriching uranium beyond the limits set by the 2015 deal in retaliation for Trump’s reimposition of sanctions, and has accelerated the process since Biden came to power. Abbasi-Davani’s admission of the military aspect of the programme will come as a surprise to the negotiators, but not the facts he revealed.

By 2015, Iran had enriched uranium to 20 per cent purity, a level that has a civilian use in research laboratories. However, this year it has gone further, enriching to 60 per cent, a level close to the 90 per cent required for a nuclear warhead and also one for which there is no real civilian use.

“Although our stance on nuclear weapons based on the supreme leader’s explicit fatwa regarding nuclear weapons being haram [forbidden by Islamic law] is quite clear, Fakhrizadeh created this system and his concern wasn’t just the defence of our own country,” Abbasi-Davani said in the interview.

“Our country backs the axis of the resistance front [against Israel] and when you enter this realm, the Zionists become sensitive.”