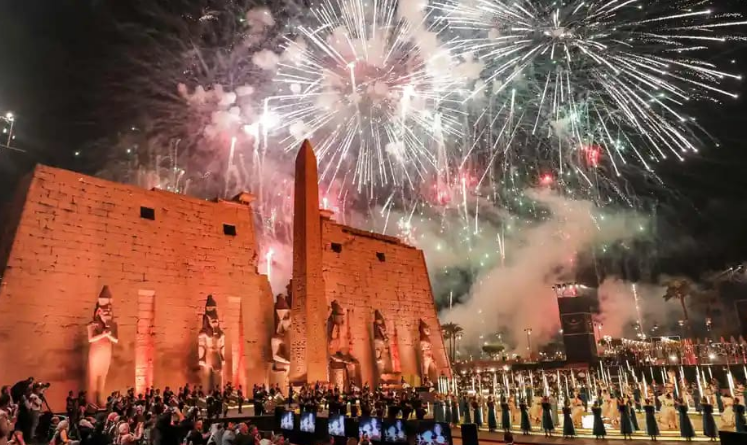 Egypt reopens its Grand Avenue of the Sphinxes in Luxor

For centuries it was one of the most important roads in Ancient Egypt, the focus of ritual celebrations for the annual flooding of the Nile, then abandoned and built over by the urban sprawl of modern-day Luxor.

Last night, though, the Grand Avenue of the Sphinxes, a 1.7-mile ancient road, officially reopened with a grand procession to rival those witnessed by the pharaohs up to 3,500 years ago.

Hundreds of dancers, musicians and costumed actors took part in the festivities inaugurating what is now one of the world’s largest open-air archaeological sites, connecting the famous ancient temples of Karnak and Luxor, after decades of restoration.

Originally built by the female pharaoh, Queen Hatshepsut (1479-1458BC), the avenue was developed over the next 1,000 years by rulers including Ramses II and Tutankhamun, flanked by up to 1,200 sphinxes, many with the heads of rams, on sandstone bases.

It was first rediscovered in the 1940s, buried under the streets of Luxor, formerly known as the ancient royal capital, Thebes, and has been excavated and restored over the past 70 years. The recreation of the ceremonial route has involved the demolition of hundreds of homes, several mosques, a 19th-century palace and a church in recent years.

The ostentation of yesterday’s ceremony reflects how much President Sisi is banking on the Grand Avenue and other new tourist attractions to revive his country’s economy after the coronavirus pandemic.

Shrines of the Theban trinity deities Amun, Mut, and their son, Khonsu, were paraded from the Karnak to Luxor temples in wooden models of ancient sacred boats, carried by actors representing the ancient Egyptian priests.

To coincide with the procession, famous Luxor heritage sites such the Hatshepsut, Medinet Habu, Ramesseum temples, and the Colossi of Memnon were illuminated, while recreations of ancient boats sailed on the Nile.

Mostafa al-Saghir, director-general of the Karnak temple complex, said that the performance, accompanied by music from the Cairo Symphony Orchestra, was designed to emulate the ancient festival of Opet, when statues of gods were paraded in a ritual journey between the shrines of Karnak and Luxor to celebrate the annual flooding of the Nile.

“During this journey people of Thebes would line up on both sides, with military marches and music playing, dancers performing and oblations offered,” he said.

From today the avenue opens visitors, who will be able to walk the same route as Egyptian pilgrims more than three millennia ago.

In April the government organised a spectacular parade in Cairo to celebrate moving the royal mummies of 18 ancient kings and queens from the old Egyptian Museum in Tahrir Square to a new National Museum of Egyptian Civilisation in Fustat, Old Cairo.

Another showpiece museum has been built in Giza to showcase the treasures of Tutankhamun, who ruled from about 1334 to 1325BC.

As well as investing in tourism projects, President Sisi, 67, has also presided over grandiose modern-day construction efforts, such as relocating the government to a new administrative capital, at a cost of £34 billion, by next year.

In Luxor, about 400 miles south of the modern capital, officials say that tourism has already begun to recover from the pandemic lull, and they are expecting a significant increase in visitor numbers in coming months.

“Hotel occupancy rates have jumped 20 per cent in November,” Mohamed Osman, head of the city’s cultural tourism promotion committee, said. “More tourists are expected to visit the country after the opening the Sphinxes Avenue.”

The ceremonial walkway was rediscovered in the late 1940s. It took more than 70 years to fully excavate and restore it, including 1,057 ram head sphinxes. Hundreds of homes along with mosques, a church, and a 120-year-old palace have been demolished to make way for the restored ancient road.