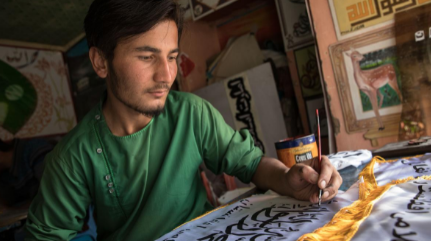 There’s a hint of the Banksy polemic about a painting on the wall outside Ahmad Farhan Kaihan’s shop in Faizabad. It shows an artist breaking through a brick barrier, two brushes grasped in his hand.

The metaphor would not be lost on the generation of Afghan artists who struggled to break free from creative constrictions under the previous Taliban rule. Today fears are rising of new restrictions.

Yet inside the shop, Kaihan, 25, surrounded by brightly coloured work from artists in the remote northern province of Badakhshan, greets customers with a smile.

A group of Taliban fighters enter. They are not, unsurprisingly, here for one of the many workshops he used to run, fostering painters and sculptors, but want a new headband in the design of the Taliban flag.

It is a sad turn of events for those with a creative mind, but artists like Kaihan are at least working. It is a better outcome than what many expected: a ban on art as in the Taliban’s previous reign. Still, many have fled, fearing reprisals or loss of the future market for their work.

Until the Taliban took control of Badakhshan, Kaihan sold and made all manner of artwork and led workshops and public art projects, including once turning a huge rock into a slice of watermelon.

The business continues to operate but the main source of income now is hand-painted flags and hats, headbands and stamps with the same flag design.

“When the Taliban arrived they ordered us to make flags. It wasn’t something we were already doing,” says Kaihan, who serves the Taliban as he would any other customer. After the fighters leave another man enters: a district mayor who wants a stamp for his documents.

“It actually helped the business because no one wants to buy art at the moment or attend the art workshops,” Kaihan continues. It is little surprise, given the economic crisis facing Afghans. “Sales have increased and the flags we make . . . are hand painted and they last longer than the stamped ones.”

He is reluctant to talk about his political stance. He refuses to point to the Taliban emblem behind him for a photograph, saying that to pose with the flag would associate him with the group.

Sales for the original business are down 80 per cent — he once had 300 students for the workshops but the economic crisis has diminished this — so he is thankful to have had another way to make an income, but it upsets him to ask for money for something so sacred to Islam.

The black and white flag has the Shahada inscribed on it: the first of Five Pillars of Islam outlined in the Koran and the core statement of Islam. It reads: “I bear witness that none deserves worship except God, and I bear witness that Muhammad is the messenger of God.” Kaihan adds: “It makes me miserable, but we need money and it’s become something we have to sell because there is a need for the flags.”

He is struggling to accept that he cannot continue his passion, at least for the moment. “My dream was to show that Badakhshan province is the art centre of Afghanistan but all of that is finished right now.”

Nasir Ahmad, 19, an artist who works at the shop, is not happy creating flags for an administration he does not support and finds the work monotonous. “We thought the Taliban would destroy the country if they came to power,” he says. “They haven’t done that, but they have destroyed the system and now they can’t run [the country]. Schools are not operating properly, there are no jobs, people can barely afford to feed themselves.”

Ahmad paints with his left hand because two fingers on his right hand were blown off seven years ago when he picked up unexploded ordnance outside his house. “I hoped to go to university to study art. We are still hopeful the Taliban will allow art to continue but that hope is diminishing day by day.”