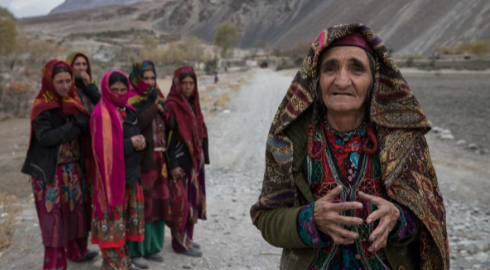 Located in a mountainous corner of northeast Afghanistan, the far-flung district of Wakhan was until this summer one of the few places to avoid ever coming under control of the Taliban.

Sandwiched between the peaks of Tajikistan to the north and Pakistan’s Hindukush and Karakoram to the south, the remote cul-de-sac had largely been left alone by the authorities.

Life was considerably more open there compared with the rest of Afghanistan; although the population are devout Muslims, women wearing burqas was almost unheard of. However, since Taliban fighters claimed authority in the province before sweeping back into power in Kabul, all that has changed.

A narrow strip of land stretching more than 200 miles to the Chinese border, Wakhan is split into two parts; the Wakhan Corridor and the Afghan Pamir, the latter being home to the Kyrgyz nomads. Wakhi people are Isma’ili Muslims, whose spiritual leader is the Aga Khan. They are Shia, unlike the Taliban who are Sunni, and have different religious rituals; they pray twice a day instead of five times, at a Jumat Khana – or community building – instead of a mosque, and women and men pray together.

Education for both girls and boys was championed by Aga Khan III, Sir Sultan Mohammed Shah, until 1957, and since by his successor Prince Shah Karim Al Husseini, 84. Likewise women were afforded more freedom and independence. But since the Taliban took control, fear has permeated this community and those values have been thrown into jeopardy.

Located at the entrance to Wakhan Corridor is the town of Ishkashim, home to some 19,000 predominantly Isma’ili people. Women who a few months ago walked around freely in the bazaar in brightly coloured traditional dress, now hide beneath newly bought blue burqas. Residents here say women are berated by the Taliban if they don’t cover up, despite there being no official policy announced by the Kabul administration.

During the Taliban’s previous reign, Badakhshan — the province in which Wakhan district is located — was never captured by the group, let alone the beautiful but unforgiving stretch of land that was carved out as a buffer zone during The Great Game between the Russian and British empires in the 19th century.

But at the end of July, a handful of cars carrying armed Taliban fighters rolled up to the district and, amid applause and cries of “long live the Islamic Emirate” in front of villagers, control was claimed over the area – much to the shock of residents. It followed a sweeping offensive of the north by the Taliban which had led to the collapse of dozens of districts and the retreat of hundreds of Afghan soldiers into Tajikistan.

Khoshal Begim, 55, is a grandmother who lives in the village of Chilkan at the far end of Wakhan Corridor, some 3,300 metres above sea level and home to around 900 people. It is a bumpy, eight-hour drive from Ishkashim to reach the remote village along dirt tracks, sand beds and rocky terrain as the winding road climbs higher into the snow-capped mountains.

At this time of the year, the River Panj runs turquoise and the trees that line the way are a burst of yellows, reds and popping oranges. Residents in the peaceful but isolated village have not had much interaction with the Taliban, but that doesn’t mean there have not been changes.

“We haven’t had any issues with the Taliban,” says Begim at first, explaining Taliban officials have been inside her home to talk with her husband because he is the village elder. “We will be happy if any government helps us.”

But Begim admits there have been changes that directly affect women in the community.

“The Taliban said women should wear burqas and long, lose clothing. It’s a fact that it upsets us, but nobody has the power to stand against them,” she said.

Life in Wakhan has always been very different compared with the rest of Afghanistan. It is a harsh existence, but there is an openness unlike in other areas; women work the land just as men do, it is not a part of the culture for women to wear the all-covering burqa, or even to hide their faces, and education is championed for both girls and boys.

Yet, in each secluded village along the route, the Taliban’s ideology has managed to infiltrate daily life, and the fear of the new government’s reputation enough to change behaviour. Despite no direct ban on music, musicians say people are too afraid to have them perform at social gatherings and weddings, so their instruments have remained silent for months.

Women walking along the road through Wakhan Corridor rush to fling on their seemingly new burqas at the sound of vehicles, worried they could be carrying members of the Taliban. One group of colourfully dressed women of all ages walking along the road in the village of Kip Kud, immediately cover their faces and try to hurry away at the sight of our vehicle, until they realise the car is carrying journalists, not morality police.

“There is no way to buy a burqa here, that’s why we covered our faces,” an elderly lady called Khorma told The Times. The women say the Taliban have only been to their village a few times and so far there have been no problems but they have heard that women have been beaten for not being properly dressed.

Panicked that war was finally to reach them, having so far escaped the violence that had for decades torn so much of Afghanistan apart, about 350 Kyrgyz nomads tried to flee to Tajikistan in July. They feared their way of life — mostly unchanged for centuries — would be threatened if the Taliban came to power. They were not able to cross the border, however, despite spending two days travelling with their herd of 4,000 sheep through the mountain pass.

One Kyrgyz nomad Aji Kuziby, 57, whom we met travelling by horseback on a six-day journey from the Pamirs to a village further down the Wakhan Corridor, said the Taliban had not caused any problems, other than demanding animals as a tax payment – something not done by the previous government and an imposition reported by residents throughout Wakhan.

The village of Khandud is approximately four-hours’ drive from Ishkashim and located on the Tajikistan border. It houses the Wakhan district governor’s office, meaning its villagers are unable to avoid the new administration, and are already hiding from its reputation.

“We can’t go out. We are very scared that if we go out the Taliban will beat us,” said Zul Asham, 38, a mother of four, although she added no woman had yet been beaten in Khandud. “This is the first time we’ve ever worn a burqa. It cost us a lot of money — 1,000 Afghani (£8.12). We were independent and we were working in the fields with the men, but now we do nothing. We just sit at home,” she added.

Residents say the Taliban’s presence has brought an insight into violence they are not used to – the display of weapons is jarring and scary. Villagers don’t even use guns to hunt because it is illegal to kill the local wild animals, like the snow leopard and wolves. The same concerns are voiced in other parts of Wakhan.

Also living in Khandud is Juma Bik, 28, who used to work as a cook for police officers during the previous government. He now does the same for Taliban fighters but the work is unpaid, just as all governmental positions are at present.

“I was very scared of the Taliban because I worked for the previous government,” says Bik, who adds that he initially felt forced to accept when he was approached by the Taliban to continue in his position.

Bik has grown his hair and beard long because of working for the new government, despite the fact he hates it, but he says he no longer fears his new employers. “I’ve received 2,000 Afghani (£16.24) in two months. There’s more chance of getting a salary if I work for them,” he says laughing. “There are no other job options.”