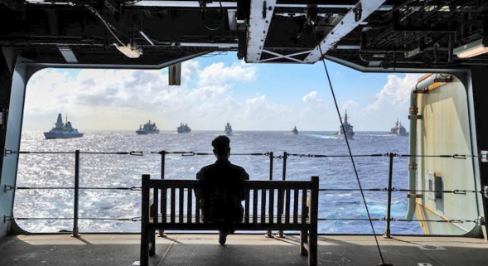 US Marines in Taiwan train troops for Chinese invasion

Taiwan will work with other countries to defend its freedom at all costs, its president vowed yesterday, hours after it emerged that United States special forces and marines are on the self-governing island bolstering its defences.

The presence of US troops on territory that China considers its own threatens to escalate already high tensions in the region. It came as the US navy announced that one of its nuclear-powered submarines had hit an object in the South China Sea, where Beijing claims extensive sovereignty.

At least 11 crew members of the USS Connecticut, a fast attack submarine, were injured. The boat has returned to port on the US island of Guam.

Officials in Washington have privately admitted that a small number of US troops have been rotating through the island, training Taiwanese forces to defend against a Chinese invasion.

Military tension is rising quickly around Taiwan Strait after intensive exercises by Chinese, US and British forces in the air and waters close to the island and the region.

The Central Intelligence Agency said it would create a new high-level “mission centre” to co-ordinate its spying operations on China. William Burns, the CIA director, called the country “the most important geopolitical threat we face in the 21st century”.

It follows repeated testing of Taiwan’s air defences by China, which this week involved more than 150 military aircraft. Beijing considers Taiwan, which split from China after the civil war of 1949, as a renegade province.

President Xi has declared that unification is part of his goal of national rejuvenation, to be achieved by the middle of the century, and has not ruled out the use of military force. Taiwan said this week it believed China could close the strait between them by 2025, facilitating an invasion.

The United States has a strong military relationship with Taiwan, selling it billions of dollars of military equipment, but does not have an official defence pact with the island.

“Taiwan does not seek military confrontation,” Taiwan’s president, Tsai Ing-wen, told a security conference in Taipei. “It hopes for a peaceful, stable, predictable and mutually beneficial coexistence with its neighbours. But Taiwan will also do whatever it takes to defend its freedom and democratic way of life.

“Taiwan is fully committed to collaborating with regional players to prevent armed conflict in the East China, South China Seas and in the Taiwan Strait.”

Some reports said that US military training units had been passing through Taiwan discreetly for years but that the decision to leak their presence now suggests that Washington wishes to send a public signal to Beijing about its willingness to stand by the island.

The presence of troops in Taiwan arguably breaches undertakings made by previous US governments. When Washington and Beijing established diplomatic relations in 1979, the US agreed to break off its formal relationship with Taiwan and withdraw its forces from the island.

The Chinese government has not formally reacted but the Global Times, a nationalistic state newspaper, said the reports of US troops, if true, “would once again expose the ugliness of the US, as well as the wanton sabotage of peace across the Taiwan Strait by Taiwanese authorities”.

Hu Xijin, the paper’s editor, wrote on Twitter: “Why just two dozen members [of the US forces]? Why secretly? The US should send 240 servicemen publicly, in US military uniform, and make public where they are stationed. See whether the PLA will launch a targeted air strike to eliminate those US invaders!”

John Supple, a Pentagon spokesman, said: “I don’t have any comments on specific operations, engagements or training but I would like to highlight that our support for and defence relationship with Taiwan remains aligned against the current threat posed by the People’s Republic of China.”

Officials said that it was not yet clear what object the USS Connecticut had struck but that it was not another submarine. One suggested it might have been a sunken vessel, a container or another uncharted object.

In Taiwan, Tony Abbott, the former Australian prime minister, who was said to be visiting in a private capacity, accused China of being a bully and said the most important thing was to ensure Taiwan’s self-determination.

Alain Richard, a former French defence minister, who was also in Taiwan, said the island should be regarded as a country, at least geographically.

The Chinese Communist Party’s official People’s Daily newspaper said President Xi had a telephone conversation with the new Japanese prime minister, Fumio Kishida, who has signalled a more assertive stance on the Chinese threat to Taiwan, and told him that the two nations should handle sensitive issues such as this “appropriately”.

The paper reported that Xi told Kishida: “At present, China-Japan relations have both opportunities and challenges.”