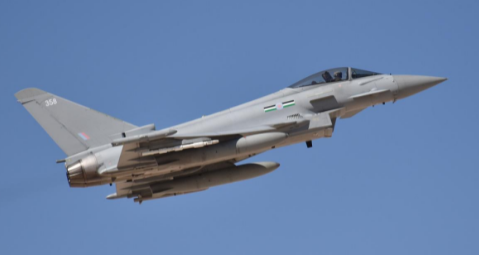 The last time Royal Air Force fighter planes took off from Israel was in May 1948, when Spitfires covered the withdrawal of British mandate forces while trying not to get embroiled in battles between the nascent Israeli air force and its Arab adversaries.

Since then, military relations between Israel and Britain, anxious to protect its lucrative ties in the Arab world, have tended to remain hidden.

While co-operation, including intelligence-sharing, is strong, a senior Israeli official likened his country to “the secret mistress” in the relationship.

This month the RAF was finally back in Israel, its fighter jets streaking over the Negev desert: welcome to Exercise Blue Flag, a major international training event for pilots and ground crews from as far apart as America and India.

A mock battle pitted UK and other forces against a pretend foe named “Dragonland” — all participants were at pains to make clear they were not preparing for war against any specific enemy. But it was impossible to detach the exercise from the hard realities of the Middle East.

Israel is involved in a perpetual campaign over neighbouring Syria, attacking Iranian assets. The Israelis have also intensified planning for a possible airstrike on uranium enrichment plants deep in Iran.

Speaking to reporters, Israel’s Air Force Brigadier General Amir Lazar acknowledged that the Dragonland enemy had “Iranian-level capabilities”. Another Israeli commander said: “Our job is to give all the participants here the most realistic war-like experience we can.”

While the Israelis regularly fly combat missions, the RAF has not operated in truly contested airspace since the opening stages of the Iraq War in 2003.

“It’s always exciting to learn from scratch how people in other air forces operate and fly in a different climate and environment, than we’re used to,” said Wing Commander John Cockroft of No 1 Squadron based in Lossiemouth, Scotland, who led the deployment of 150 RAF personnel and six Typhoon FGR4s to Israel. “We had a lot of opportunities to fly in different scenarios and train for missions that the Typhoon, a fully multi-role platform, is supposed to perform.”

Such a deployment would have been diplomatically unthinkable only a few years ago. The UK government would have been too concerned about jeopardising interests in the Arab world. In 2017 Priti Patel was forced to resign as international development secretary after it emerged that while on a private summer holiday to Israel she had held unofficial meetings with ministers.

But the international climate is changing: post-Brexit Britain is more interested in an open relationship with Israel, particularly in light of the Abraham Accords under which Israel has established diplomatic links with more Arab countries, including the United Arab Emirates.

“Training with Israel and other allied nations will improve our ability to work together and better prepare us to tackle global threats,” said Neil Wigan, Britain’s ambassador to Israel.

But military co-operation between the two countries actually goes much deeper. In the past few years RAF fighter jets and aerial tankers taking off from Cyprus have routinely crossed Israeli airspace to carry out missions against Isis targets in Syria and Iraq.

Britain’s acquisitions of Israeli military hardware have multiplied, including guided missiles, drones and training simulators for pilots and submarine crews.

“Some of the old habits take time to die,” said one British officer. “We still have a long tradition of training and operating with our Arab allies and keeping our work with the Israelis under wraps, but that’s obviously changing now.”