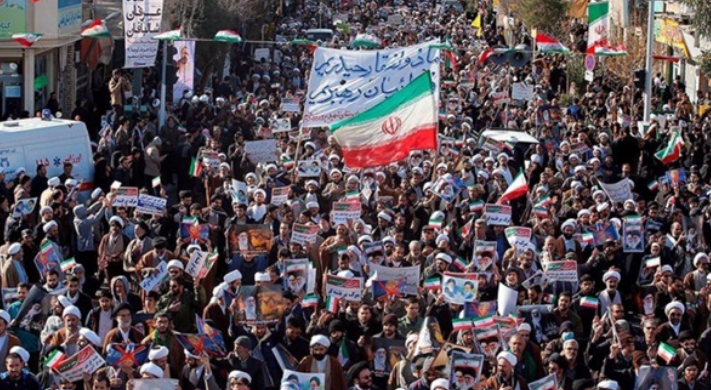 “Enough is enough.” With this sentence, the situation that Iranian women have reached under the mullah regime can be expressed in terms of oppression, injustice and all means of violence, as well as the crimes committed by families towards their daughters. This prompted women to express their rejection of these crimes in protests, where a group of Iranian women activists came out in some Iranian cities on October 8 in a demonstration to protest against the increase in violence against Iranian women.

Iranian media reported that this protest, which was organized in front of the judiciary in Sanandaj in western Iran, followed the death of a 22-year-old girl who was burned by her parents after they poured gasoline on her because they discovered that his daughter had a boyfriend. The demonstrators demanded the Public Prosecutor’s Office and the responsible institutions to take measures to prevent violence against women, which prompted the Kurdistan Public Prosecutor Mohammad Jabari to confirm that he called for an investigation with the doctor who revealed the news of her death.

It should be noted that this was not the first incident in which women were exposed to this brutal crime, and this crime is not strange under the rule of a regime that oppresses women all the time, to the extent that on October 8, just prior to the World Day Against the Death Penalty on October 10, the Iran Human Rights Organization announced that at least 164 women have been executed by Iran during the past 12 years, including nine women who were executed in 2020.

Rajat Khosla, senior director of research, advocacy and policy development at Amnesty International, revealed that a large number of women who have been sentenced to death in Iran had trials that were spurious and unfair and often did not observe due process, nor were the violence and sexual assault that occurred against Iranian women considered.

Amnesty International stated in a report that many trials of women executed around the world were unfair, and many human rights organizations called for the need to abolish the death penalty this year for women who were sentenced to death.

Osama al-Hatimi, a journalist specializing in Iranian affairs, explained that Iran was not ranked first in the world in terms of domestic violence as a matter of plotting against the Iranian regime, as many statistics issued by social and criminal institutions in Iran indicate, as well as statements by some concerned officials about the seriousness of the situation suffered by both women and girls in Iran. It is no longer a secret that most of the killings in Iran are related to family murder, which indicates the severe condition of police and judicial slackness in protecting women.

In an exclusive statement to the Reference, Hatimi pointed out that the Iranian state’s failure to protect women is not limited to not activating the law and providing adequate guarantees for their protection, but also extending to its participation in establishing many of the motives that drive perpetrators of violence against women to carry out their violations against women, whether within families, where the bad political and social practices led to high rates of poverty, which is negatively reflected in the conditions of women, or whether outside families, where the inferior view of some Iranian sectors and groups of Iranian women and then dealing with them in a way that is extortionate or carries a lot of contempt.