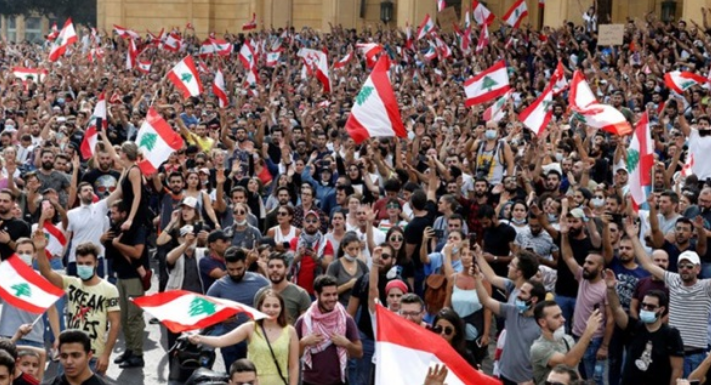 Tensions have escalated between Iran and Israel in Lebanon, which increases the pain of the land of cedars and the brotherly Lebanese people, whose country is always an arena for foreign interventions and internal strife.

The past years have witnessed confrontations between Israel and Iran, directly or indirectly, in Lebanon, Syria and the Gaza Strip. The two sides have been fighting a proxy war for quite some time in the Middle East, with the Iranian-backed Lebanese Hezbollah fighting the Israeli army.

Hezbollah has worked in coordination with Iran throughout the Middle East since its founding in 1982 to export Iran’s Islamist revolution and to fight the Israeli forces that invaded Lebanon in the same year.

The terrorist militia’s relationship with Iran is one of the most important in the Middle East, as it possesses a highly efficient intelligence service and carries out security-maintaining tasks in its own areas in southern Beirut and southern Lebanon, as well as the border areas with Syria, to the point that it became stronger than the Lebanese state. Over the past four decades, Hezbollah has been largely associated with the conflict with Israel.

Hezbollah helps Iran consolidate its influence throughout the region, and its Secretary-General, Hassan Nasrallah, is a prominent figure in the so-called “resistance axis” led by Iran, which aims to confront Israel, the United States and their Arab allies.

The militia’s close connection to Iran was evident when it joined the war in Syria in 2013 in defense of their common ally, Syrian President Bashar al-Assad. In Iraq, it publicly acknowledged that it supports armed militias loyal to Iran.

Hezbollah has established Iran as a major player in Lebanon, a country where the United States, Russia, Syria, Saudi Arabia and many other countries have sparred for influence for years.

Therefore, Israeli Prime Minister Naftali Bennett expressed his hope that the Lebanese people would be freed from the grip of the Iranian Revolutionary Guards, saying, “I am tired of the Iranian control represented by Hezbollah in Lebanon, because every place the Iranians enter enters into a cycle of violence, poverty, instability and failure.”

This comes at a time when Israel is trying to demarcate the maritime borders with Lebanon with American mediation. The negotiations were supposed to be limited to a sea area estimated at 860 square kilometers, based on a map sent in 2011 to the United Nations, but Lebanon later considered that the map was based on wrong estimates and demanded an additional area of 1,430 square kilometers, including parts of the Karish field, in which a Greek company operates for Israel.

In light of the deteriorating economic and political conditions, and the military intervention from all sides, Lebanon faces the specter of a return to civil war again following the armed clashes that took place in Beirut, which left a number of dead and wounded.

The media reported that tension prevails in the Tayouneh neighborhood of Beirut following shooting and injuries near a protest sit-in organized by Hezbollah and Amal Movement supporters to demand the hand of the judicial investigator in the case of the explosion of the port of Beirut.

The Lebanese army announced the arrest of nine people, including a Syrian, against the backdrop of violent clashes in Beirut.

The leaderships of Hezbollah and Amal accused groups of the Christian-based Lebanese Forces militia of carrying out direct sniping operations with the aim of premeditated killing in the attacks in Tayouneh, which was denied by Ghassan Yared, Secretary-General of the Lebanese Forces Party, stressing that the accusations of Hezbollah and Amal regarding the involvement of his party in the shootings are mere fallacies, adding that the demonstrations were not peaceful, as some of the demonstrators entered the inner neighborhoods of Ain El-Remmaneh and destroyed cars and private property.

Kassem Hachem, a member of the Lebanese parliament, confirmed in press statements that there are those who are ambushing the country and its stability, adding that he was ready for this attack targeting the stability of the country and opening the door to strife if those concerned do not rectify the seriousness of what happened. He called for the need to give precedence to the language of reason and wisdom over the vocabulary of division and fragmentation in order to spare the country more tension and provide a calm atmosphere that saves Lebanon and the Lebanese a lot.

Observers believe that the Lebanese people are paying the bill for foreign interventions, and that what is happening in terms of security chaos and clashes is expected in light of the collapse that Lebanon is experiencing at all levels.