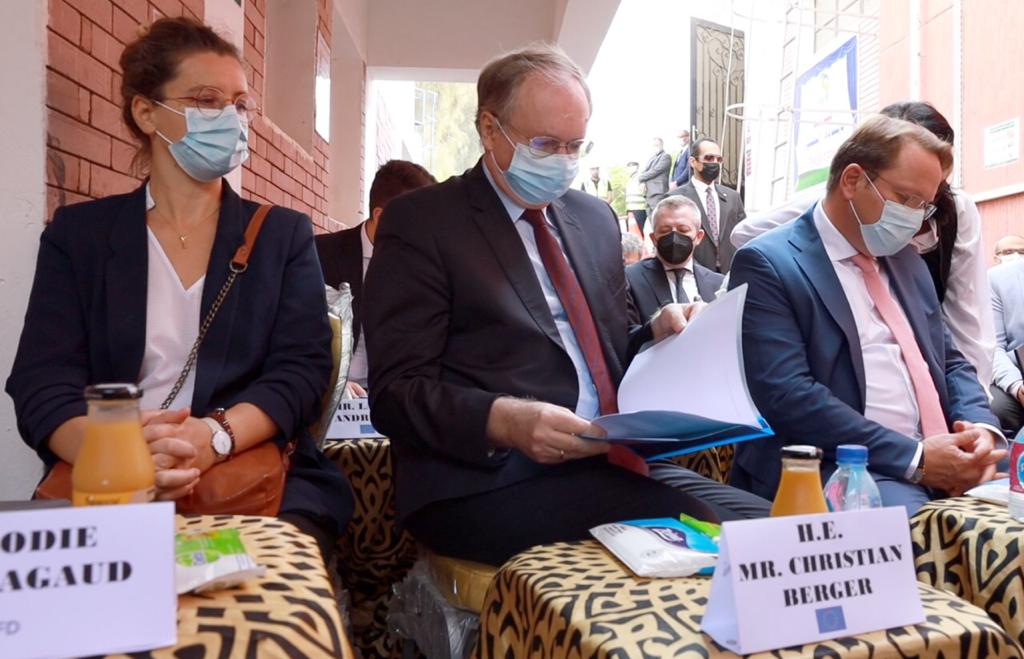 Tuesday, October 26th, 2021, Representatives of the European Union Delegation to Egypt  (EU) and l’Agence Française de Développement (AFD) said the water tank project of Ard El Lewa area in Giza governorate is a successful pattern of cooperation with Micro, Small and Medium Enterprise Development Agency (MSMEDA) and the engaged Egyptian entities.  They emphasized that the EU and AFD are strategic partners to Egypt and supporters to development efforts in all the governorates, particularly, sustainable development endeavors in underdeveloped areas.

“The Water Tank is one of the most important and successful projects implemented by AFD through EU funding and in cooperation with MSMEDA together with Giza governorate and the Holding Company for Water and Wastewater in Giza (HCWW),” Deputy Director of  AFD Cairo Office Ms. Elodie Montetagaud said. “The tank actually provides potable water to tens of thousands of inhabitants of the area,” she reiterated.

“Creating a better environment for the inhabitants and helping them access potable water is a major objective the Egyptian government and AFD are committed to achieve,” Ms. Elodie added.

Press Officer and Spokesperson at the EU Delegation to Egypt Ms. Rasha Serry said EU Commissioner for Neighborhood and Enlargement Mr. Oliver Varhelyi’s visit of the water Tank ascertains the fruitful and long cooperation between the government of Egypt and the European Union and European development agencies as well. She emphasized that the EU is and will be a major partner to Egypt and main sponsor of Egyptian development efforts, especially the sustainable development activities in the regions in need of better livelihood including potable water, infrastructure and wastewater.

Meanwhile, Giza Governor General Ahmed Rashad said that projects carried out jointly with the EU and AFD have benefited around 388 thousand inhabitants and largely contributed to the provision of many services they were lacking.

Head of Human and Community Development Central Sector at MSMEDA Engineer Medhat Massoud explained that partnership between MSMEDA and the EU is a deep-rooted partnership and includes a number of cooperation agreements along the previous years. They all align with the Sustainable Development Objectives and Egypt’s Vision 2030.

During the presentation given to the EU-AFD delegation on details of projects implemented in Giza under the Unplanned Areas Upgrading and Employment Enhancing Program (UAUEEP), Engineer Massoud said the implementation of the ground tank in Ard el Lewa area has been finalized. He further explained that this tank has been established at a capacity of 6 thousand meter3 to provide potable water for around 35 thousand households. Implementation cost of the civil works makes up L.E. 19 million in addition to the contributions of Giza governorate and HCWW.

Engineer Massoud added that other projects have been implemented to develop Ard el Lewa area: substituting and renovating potable water and wastewater networks at Saftawy and Salama Al Rady areas at a cost of L.E. 56 million. Another project is the pressure line to connect potable water from the tank to water networks within the same two areas totaling L.E. 19 million and therefore the total cost of projects that have been completed in Ard el Lewa reaches around L.E. 94 million.

This came within the framework of the visit of a high-level delegation to inaugurate the water tank project in Ard el Lewa where MSMEDA has supervised its implementation in cooperation with Giza governorate and the Holding Company for Water and Wastewater in Giza under the Unplanned Areas Upgrading and Employment Enhancing Program (UAUEEP) funded by the EU and AFD.