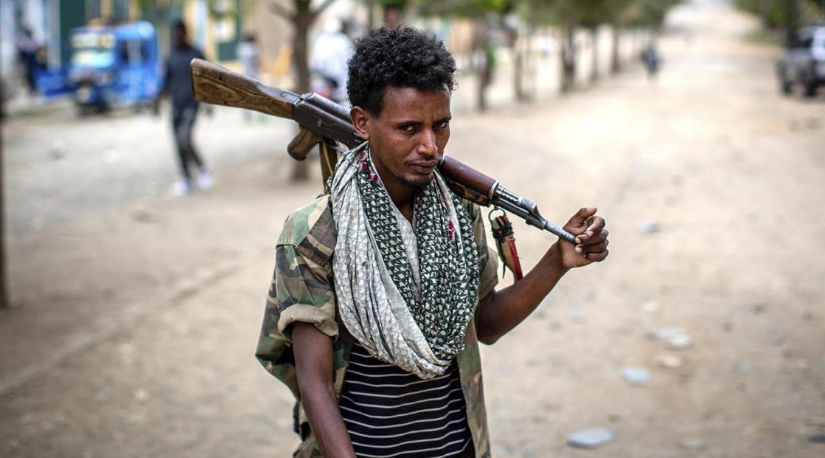 Ethiopia’s call to arms in Tigray conflict: bury the enemy

Ethiopia has deployed thousands of troops to attack rebels in the region of Tigray and started an airstrike offensive in an attempt to bring the country’s 11-month civil war to an end.

Diplomatic and humanitarian sources told The Times that the army had conducted attacks against rebel positions and thousands of soldiers had been spotted moving towards the front line.

A rebel statement also claimed that Ethiopian government forces had hit several areas with airstrikes and launched a ground attack involving “hundreds of thousands of regular and irregular soldiers”.

Regional governments have urged schoolchildren to rise up against rebel fighters and “bury the enemy”.

Fighting broke out in Tigray, Ethiopia’s northern-most province, in November after months of simmering tensions between the government of Abiy Ahmed, the prime minister, and the Tigray People’s Liberation Front (TPLF), Tigray’s former leaders, erupted into violence.

The group ruled Ethiopia for 27 years until it was forced out by protests and replaced by Abiy’s administration in 2018.

Until recently the fighting was confined to Tigray, where thousands of civilians are thought to have been killed and 400,000 people are on the brink of famine, according to the United Nations.

Ethiopian government troops and their allies have been accused of atrocities including murders and gang rapes.

However, after recapturing much of their region in a lightning ten-day offensive in June, the rebels broadened the war by pushing deep into the neighbouring regions of Afar and Amhara.

They claim that they are attempting to secure a humanitarian corridor to Tigray, which has been mostly cut off from aid since June, but civilians in Amhara have also accused them of atrocities, and many people in the region believe they are bent on regaining power.

Even before the new offensive was launched, the Tigray rebels had been battling government forces and allied militias in several parts of the Amhara region.

When The Times visited Chenna Teklehaymanot, a village in the province, vultures had been circling for weeks after fighting swept through, drawn by the rain-soaked corpses rotting in the fields.

Along the road and among the village’s wooden houses shallow graves were dug up by dogs.

At least 56 villagers were killed during a week-long battle in early September, locals said. The government puts the death toll far higher at 193. How they were killed is unclear: some may have been fighting alongside the military or caught in the crossfire, but residents said that others were murdered by rebels.

Wearing a black hat as a sign of mourning, Baze Kisate, 52, said that he fled as machinegun fire rattled through the village. When he returned days later he found the bodies of two of his brothers outside his house.

“They had been tied up and shot in the back of the head,” he said, adding that they had carried supplies for the army during the fighting.

Baze’s home, like others in the village, had been ransacked, its roof pockmarked by bullet holes. Near by, among a pile of rubbish left by the fighters, laid discarded wound dressings.

The bodies of villagers have been buried. The corpses that remain in the countryside belong to Tigrayan fighters. “We will not pick up their corpses, they are like animal dung to us,” said Kassa Fenqlew, who claimed he killed a rebel with a machete.

Elsewhere in the village, Sefu Mihrete, 50, said that the Tigrayan fighters came to his house three days into the battle, tied up his brother Fentaye in the courtyard outside and him in the forehead. Sefu also said they shot his brother’s nine-year-old son, who later died of his wounds, and raped his brother’s daughter, Tadla.

“I was hiding inside the house, behind a storage container, and I could hear her screaming,” said Sefu.

Amhara state has launched a mass mobilisation of troops, with its president calling upon middle and secondary school students to “bury the enemy”, while casting the struggle as an existential one. Abiy has urged “all capable” Ethiopians to join the fight.

About an hour’s drive north of Chenna Teklehaymanot, towards the front line, a group of about 30 militiamen who heeded this call kept watch for a rebel advance. Their outpost in the foothills of the Simien Mountains, a Unesco world heritage site, was once a beauty spot popular with tourists keen to photograph the rugged terrain.

Most had rifles, although others were armed only with machetes and wore plastic shoes. All had spent weeks sleeping on the mountainside. They complained to their commanders that they did not have enough blankets, bullets or food.

One of them, Maru Terefe, 47, is a park ranger whose day job used to involve ferrying tourists about the park and preventing cattle from grazing in its conservation area. Now he is guarding the front line in his ranger’s uniform.

“I really enjoyed my job and protecting natural resources,” he said. “But now this is about survival. I cannot sit back and watch while our young people die on the battlefield.”

He took part in the battle at Chenna Teklehaymanot, where he used the rifle he has carried for ten years for the first time, and where helped to bury the dead. His views have been hardened by the war. “The TPLF kills people and slaughters animals. We will not stop fighting until we have fundamentally wiped them out,” he said.

His attitude is echoed by residents of a school serving as a camp for displaced people in the nearby town of Debark, where as many as 80 people were crammed into each classroom. Many blame the Tigrayan people, not just the TPLF, for their plight.

“They want to destroy the Amhara, they want to loot our property and make us poor,” said Mulu Alelign, 39, who fled her hometown, Adi Arkay, in July when it was occupied by the Tigrayan rebels.

“The people of Tigray and the TPLF are not different. They both have the same mentality. They are terrorists,” she said, adding that she would no longer speak to her aunt, who is married to a Tigrayan. “I don’t want to see her face.”

Others are more conciliatory, simply blaming the TPLF for the war. “When the TPLF were in charge, they abused human rights and used a policy of divide and rule,” said Tsehay Melkamu, 20.

“Now they want to come back to power and make the Amhara poor. I don’t want to see that. I want to see a democratic and united country.”

Western leaders have been trying fruitlessly to bring the war to an end. Last month President Biden signed an executive order allowing sanctions to be brought against leaders on both sides deemed to be fuelling the fighting and undermining peace efforts.

Such initiatives have helped to fuel growing anti-western sentiment in Ethiopia, where the government has accused aid agencies in Tigray of helping the rebels.

Over the summer, billboards were erected around Addis Ababa, the capital, advising “white demons” to “clear off”.

Last month, shortly after the UN’s aid chief described the humanitarian crisis in Ethiopia as a “stain on our conscience”, the government expelled seven senior UN officials whom it accused of meddling in the country’s affairs.

In Chenna Teklehaymanot, the loud thud of artillery could be heard from the next valley. One of the residents, a 13-year-old boy whose teenage brother was killed during the battle, said that he was eager to join the fighting.

“I have decided to kill one of them because I have lost my brother,” he said of the Tigrayan rebels. “I will not stop thinking about that.”